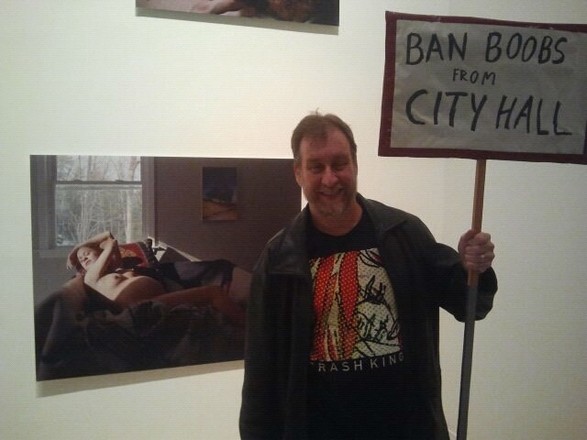 Heavy doses of snark ahead. You’ve been warned!

As I have detailed several times before, many Evangelicals have what I call boob-a-phobia — the fear of breasts. This phobia is quite common among Evangelical men who have feasted on a steady diet of complementarian, patriarchal, women-are-Jezebels, men-are-weak-pathetic-helpless-horndogs preaching and teaching. Women are expected to keep their bodies covered at all times lest a glimpse of their cleavage, legs, or feminine shape causes widespread male lust. Women are always viewed as gatekeepers. It’s up to them to make sure that visually-driven Jesus-loving man-children don’t see anything in the appearance of women that might cause them to say to themselves, nice. (Jesus heard that buddy! Repent!)

Recently Fundamentalist morality policewoman Lori Alexander thought it important to write about breastfeeding church women causing Christian men to have non-procreation boners. Here’s what Alexander and one of her acolytes had to say:

It’s amazing how many Christian women think it’s fine and dandy to openly breastfeed their babies and show their breasts to men who aren’t their husbands. It riles women up when I teach them to be modest and discreet even while breastfeeding. They falsely believe that breasts aren’t sexual and it’s men’s fault if they like to see breasts while nursing because they are “perverts.”

Women have told me that Jesus’ mother Mary breastfed openly in the temple and Catholics have shown me pictures of Mary’s breast hanging out in preparation to nurse her baby. There isn’t one single Bible verse that tells us that she breastfed openly! Not one. I am sure she was known as a godly, discreet, and modest woman since God chose her to bear His Son.

Here is a comment from one wise women on this topic:

It’s like people don’t read the scriptures anymore and do word studies. It annoys me. Men are visual or there wouldn’t be so many verses about the body in Song of Solomon alone! But since this is about breasts here are just a few verses on them.

Let her breasts fill you at all times with delight; be intoxicated always in her love. — Proverbs 5:19

This verse is implying that the breasts are satisfying and here we are seeing the encouragement for them to always make a man filled with delight. The King James uses the word satisfy which implies that they are satisfying to a man. They aren’t drawn to things that are not satisfying.

Both satisfy and delight mean to be filled, take pleasure in. It is the same delight that is used when it says God delights in His people. The way God delights in His people is the way a man is to be about his wife’s breasts only. But like everything that is beautiful in God’s Holy Word and ways, it gets perverted by the world we live in and you have men delighting in other women’s breasts and you have women practicing zero discretion. Zero.

If that wasn’t enough to show that men like breasts here is another verse:

Your two breasts are like two fawns, twins of a gazelle, that graze among the lilies. — Song of Solomon 4:5

Your stature is like a palm tree, and your breasts are like its clusters. I say I will climb the palm tree and lay hold of its fruit. Oh may your breasts be like clusters of the vine, and the scent of your breath like apples. — Song of Solomon 7:7-8

How beautiful are your feet in sandals, O noble daughter! Your rounded thighs are like jewels, the work of a master hand. Your navel is a rounded bowl that never lacks mixed wine. Your belly is a heap of wheat, encircled with lilies. Your two breasts are like two fawns, twins of a gazelle.– Song of Solomon 7:1-13

The man in Song Of Solomon was clearly attracted to this woman’s breasts. Why did God allow that to be in His word for everyone to read? Because men love breasts and in the context of marriage it is a beautiful thing! But again the perverted world we live in would like to believe this isn’t true or simply don’t care like they do with homosexuality. They believe it simply isn’t true that God hates it or they don’t care.

Alexander oh-so-wrongly believes that men always view female breasts in a sexual manner. The same with legs or the feminine shape. Evidently, the men she and her followers have been around are unable to distinguish between breasts that are being sexually satisfying and breasts used as milk wagons for junior. In their minds, any exposure is an open invitation to lust. Perhaps this says more about these men than it does breastfeeding mothers who dare to do what is natural and normal when breastfeeding their babies.

One commenter on Alexander’s post had this to say:

This commenter doubts whether breastfeeding “exhibitionists” are True Christians®. Why, no True Christian® woman would ever expose any part of her breasts while breastfeeding. Think of the children! uh, I mean the men. Evidently, this woman’s husband has an eye or two for breasts. Why, church women have exposed their breasts to him millions of times!  Makes me want to reconsider Christianity. Now, where’s this church so I can go and investigate their sized DDD — Father, Son, Holy Ghost — faith?

Alexander’s post and its attendant comments are a reminder of how infantilized many Evangelical pastors, churches, and congregants have become.

Let me conclude this post with a couple of stories I think readers might find funny. In 1994, I was the co-pastor of Community Baptist Church in Elmendorf, Texas. On Wednesdays, the church gathered for prayer. Not a typical five-minute Baptist prayer meeting, but one that lasted upwards to two hours. We would sing a few songs and then get on our knees and send our prayers upwards to the ceiling God. (This was the only time women were permitted to speak during church.) Polly and I have six children. At the time, our girls were five and three. Being the daughters of fine upstanding Fundamentalists, the Gerencser girls wore dresses to church, and everywhere else, for that matter. As prayer meeting droned on, it was not uncommon for us to place the girls on the floor for a nap. One evening, a fire-breathing Calvinist — who is still a church member — came to me and said that she could see my daughters’ underwear while they were lying on the floor. She thought I would went to know so I could cover them up. Instead, her new pastor told her, don’t look. That went over well!

I had a similar experience in the 1970s while attending Sierra Vista Baptist Church in Sierra Vista, Arizona. I was eighteen at the time, and I was dating a twenty-year-old church girl named Anita. Anita irritated the hell out of then-deacon Chuck Cofty (now a Baptist evangelist) with her short skirts. One day, Cofty came up to me, filled with righteous indignation, and said, Your girlfriend’s skirt is too short and it is immodest. Cofty expected me to tell Anita to wear longer skirts. Trust me, even if I wanted to pass on Cofty’s edict — and I didn’t; I liked her skirts — Anita wasn’t the type of woman you could badger into compliance. I told Cofty the same thing I told the woman at Community Baptist, don’t look.

And here we are in 2018. I have two words for Alexander, her followers, and their menfolk, DON’T LOOK!