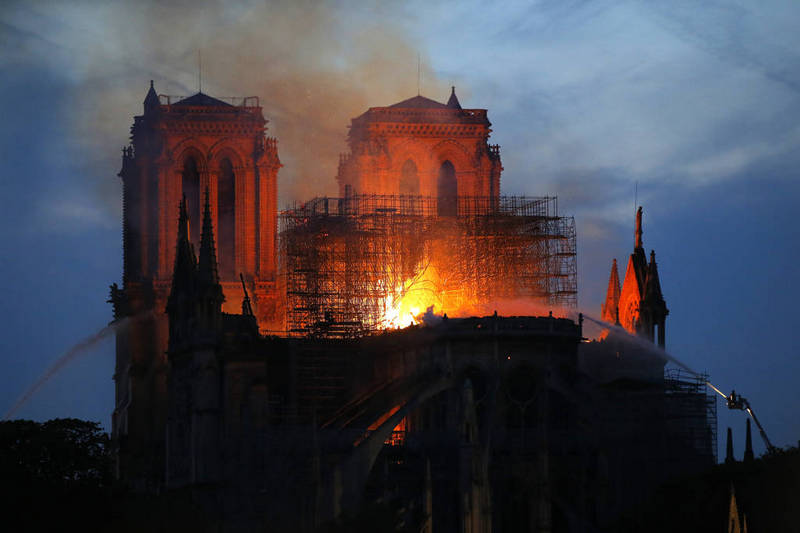 Within the past forty-eight hours, two news items related to the Catholic Church caught my attention. One saddened me; the other left me furious but not surprised.

Les francaises sont tres choqués wrote a friend of mine who lives just outside the City of Light. Tout le monde est tres choqué, I responded. Indeed, the French were shocked at the Notre Dame Cathedral fire, and so was the world. I have divorced myself from the Catholicism in which I was raised, and my friend is a non-believer of Jewish heritage. But we both love art, architecture, history and Paris itself, so we feared the loss of one of the monuments Sir Kenneth Clark all but defined as civilization itself. Even in a country that prides itself on laïcité, the Notre Dame is the very epicenter of the nation: distances between Paris and other points in France are measured from the Cathedral.

It seems, thankfully, that the main structure of the Cathedral, and its iconic rose windows, were spared. But as the spire burned away, a leader of the Roman Church was igniting controversy—and re-inflaming old wounds some of us have suffered at the hands of the church’s entrusted servants.

I am referring to a letter from Benedict XVI, the Pope Emeritus. He’d written it several days before the Notre Dame conflagration, but it was going viral right around the time when les pompiers were expressing uncertainty as to whether the 850-year-old house of worship could be saved. Even in an age defined by an American President whose explanation of “the crisis at the border” might be confused with a porn movie script that was rejected because its plot was too unbelievable, Benedict’s explication of the origins of sexual abuse by priests would be seen as disingenuous or simply dishonest if it weren’t so bizarre and discombobulated. Not surprisingly, he blames an “egregious event”: the “collapse” of “previously normative standards regarding sexuality” in the 1960s:

Sexual and pornographic movies then became a common occurrence, to the point that they were screened at newsreel theaters [Bahnhofskinos]…

Among the freedoms that the Revolution of 1968 sought to fight for was this all-out sexual freedom, one which no longer conceded any norms.

The mental collapse was also linked to a propensity for violence. That is why sex films were no longer allowed on airplanes, because violence would break out among the small community of passengers. And since the clothing of that time equally provoked aggression, school principals also made attempts at introducing school uniforms with a view to facilitating a climate of learning.

Part of the physiognomy of the Revolution of ‘68 was that pedophilia was then also diagnosed as allowed and appropriate.

Now, maybe I haven’t flown enough, but I never knew that “sex films” were shown during flights. Sure, I’ve been on transatlantic flights where the likes of Léon the Professional and La Femme Nikita were shown. And, yes, Europeans are less squeamish than Americans or other people are about seeing some skin in their movies, but I would hardly label those two films, or any other airline cinematic offerings, as “sex films.” Moreover, while there has been some violence among passengers, I don’t recall hearing of any that was provoked by the showing of anything on an airborne screen.

Some school principals indeed made “attempts at introducing school uniforms.” But, as far as I can tell, any “aggression” provoked by students’ attire wasn’t a result of its sexual provocativeness; rather, it was a result of kids trying to impress each other with designer labels or being enraged by seeing the colors of a rival gang.

And, I’m no expert in the field, but to my knowledge, nowhere has pedophilia been “diagnosed” as “allowed and appropriate” except, perhaps, in NAMBLA literature. Certainly, no one approves of it: Almost any time a teacher, priest or someone else is accused of inappropriate contact, the cries for his or her removal are all but unanimous among parents and others in the community.

So, the former Pope is either seriously deluded about the phenomenon of priests taking advantage of the young people entrusted to them—or he, like too many other church officials, is trying to deflect blame away from those who deserve it: the perpetrators and those who enable and, worse, fail to penalize them.

While the original look and “feel” of the Notre Dame’s spire cannot be replicated, and artworks and artifacts lost in the blaze cannot be replaced, at least most of the cathedral’s grandeur can be saved and/or restored. The same cannot be said for the trust and faith many people had in their priests and church as long as the likes of Benedict offer up explanations for the real crisis in his church that are no more credible for than the ones the American President offers for the Trumped-up “crisis at the border.”