Romans 3: What the Bible Says About the “Human Condition” 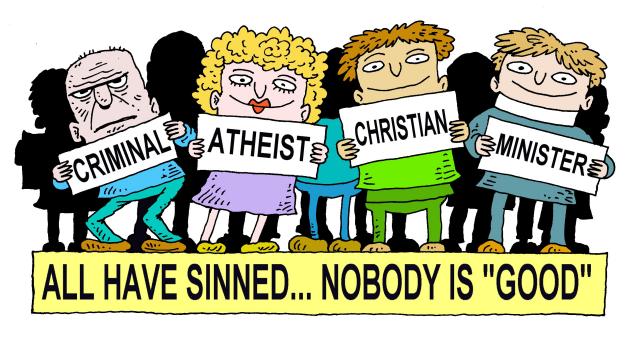 Evangelicals believe that all humans are born sinners, at variance with God, and headed for Hell unless they repent of their sins and put their faith and trust in the atoning work of Jesus Christ and his resurrection from the dead. Evangelicals get their view of humanity straight from the Bible — a collection of books they believe is the inspired, inerrant, infallible Word of God. In their minds, the Bible is different from all other books. Divine in nature, perfect, and true, the Bible reveals to us God, the “human condition,” and what all of us must do to have right standing with God and avoid eternal damnation in Hell. According to Evangelicals, atheists and other non-believers deliberately reject the truths of the Bible because they desire to live sin-filled lives. Never mind the fact that Evangelicals also live sin-filled lives. You see, they have an out — Jesus. No matter what terrible things they do, forgiveness and restoration are but a prayer away:

If we [Evangelicals] confess our sins, he [Jesus] is faithful and just to forgive us our sins, and to cleanse us from all unrighteousness. (I John 1:9)

No bad behavior (sin) is beyond God’s forgiveness. King David committed adultery and had the woman’s husband murdered so he could have her for his own, yet he is called a “man after God’s own heart.” (Acts 13:22) We need only turn to the modern-day fall-from-grace/forgiveness stories of men such as Ted Haggard, Jimmy Swaggart, and Jim Bakker to see how the process works. Those of us who were once Evangelicals have first-hand experience with the sin/forgiveness, wash/rinse/repeat process by which we procured continued right-standing with God. Daily and twice on Sundays, we confessed our sins to God and asked for his complete, total, buried-in-the-deepest-sea forgiveness:

He will turn again, he will have compassion upon us; he will subdue our iniquities; and thou wilt cast all their sins into the depths of the sea. (Micah 7:19)

The Lord is merciful and gracious, slow to anger, and plenteous in mercy. He will not always chide: neither will he keep his anger for ever. He hath not dealt with us after our sins; nor rewarded us according to our iniquities. For as the heaven is high above the earth, so great is his mercy toward them that fear him. As far as the east is from the west, so far hath he removed our transgressions from us. (Psalm 103:8-12)

There is therefore now no condemnation to them which are in Christ Jesus, who walk not after the flesh, but after the Spirit. (Romans 8:1)

Evangelicals believe they are hopeless and helpless apart from God’s grace. While Evangelicals often present themselves as superior to atheists, agnostics, Buddhists, Muslims, pagans, and other non-believers, when confronted with their own “sinfulness” they reply, “I’m just a sinner saved by grace!”  According to their doctrine, the only thing that keeps Evangelicals from spending eternity in the Lake of Fire with Hitler, Mother Teresa, Christopher Hitchens, Barack Obama, and Bruce Gerencser is the moment in time they repented of their sins and asked Jesus to save them. Evangelicals see themselves as sinners who just so happened to have pushed the right button on the Eternal Hell Fire Insurance Policy®.

The Apostle Paul in Romans 3 reminded Christians and unbelievers alike of their true nature. Here’s how Paul describes the “human condition”:

Paul goes on to describe the “human condition” this way:

Their throat is an open sepulchre; with their tongues they have used deceit; the poison of asps is under their lips: Whose mouth is full of cursing and bitterness: Their feet are swift to shed blood: Destruction and misery are in their ways: And the way of peace have they not known: There is no fear of God before their eyes.

Is it any wonder Evangelicals live such schizophrenic lives? On one hand, God commands them to live morally, ethically, and righteously, and even commands them to be as perfect as their Father in Heaven is perfect (Matthew 5:48). Yet, on the other hand, they are repeatedly reminded by Paul and other Biblical authors that it is impossible for them to keep, follow, and practice that which God commands. Thinking this way leads to all sorts of emotional stress. Evangelicals may be “sinners saved by grace,” but their behavior suggests that their lives are long on sin and short on grace. One need only read the Black Collar Crime series to see how such thinking affects Evangelicals. So-called men of God — deacons, evangelists, Sunday school teachers, and worship leaders — praise the wonders of God’s grace on Sundays, all while they are fucking their secretaries, sexually abusing boys and girls, seducing church teenagers, and otherwise engaging in behaviors that most people consider wrong. “Oh Bruce,” Evangelical apologists say, “these stories are the exception to the rule!” Really? You might want to read Is Clergy Sexual Infidelity Rare? before defending God’s spokesmen. You might also want to talk to pastors who are willing to be honest about their own “sinful” behaviors and that of their congregations — that which has been confessed to them in secret.

“Fine, Bruce,” Evangelicals say. “Are atheists any better?” To that question I reply, yes and no. Atheists don’t believe in “sin.”  Most atheists reject Evangelical moralizing about “sin” and instead focus on good and bad behavior. While atheists certainly have smaller “sin” lists, they do believe that certain behaviors can be categorized as good or bad, along with many behaviors being neither good or bad. Most atheists are humanists, and their humanism gives them a moral, ethical, and practical foundation for living one’s life. Atheists recognize that some of their brethren are despicable human beings, every bit as bad as the men of God detailed in the Black Collar Crime series. They also recognize that humans are capable of doing good without the help of imaginary deities.

If atheists reject the Christian view of the “human condition” and forgiveness, how then do they deal with bad behavior? I can’t speak for all atheists, but I can share how I and other atheists I personally know handle acts of bad behavior. When we act inappropriately or cause harm to others, we confess it, ask forgiveness of whomever we harmed, and if necessary, make restitution. We recognize that none of us is perfect, and we can, at times, say and do things that hurt others. We own our behavior and vow to act better going forward. If our bad behavior has caused material or social harm, we make amends. One of the reasons I write about the things I do is because I believe I have a moral and ethical responsibility to own past bad behaviors; that the harm I caused to congregants must be atoned for; that the harm I caused to my wife and children must be made right. Simply put, wrongs must be made right. I can’t undo the past, but I can own past bad behaviors, and vow to be a better man, husband, and father. I will, most certainly, fail in this endeavor, but each day of my life I will try to be a better person than I was the day before. No magical wiping the slate clean, no religious incantations to a mythical God, just an honest, heartfelt commitment to being good. Is that not all that any of us can do?

To Evangelicals I say, leave your harmful religion behind. Humanism provides a far better way to live one’s life. And it’s a lot less stressful and a hell of a lot more fun. 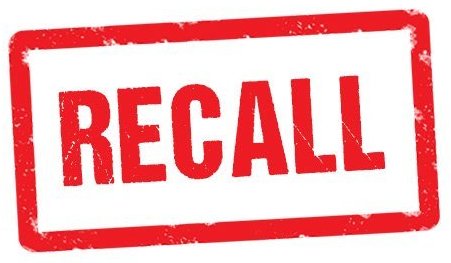 Many cars are being recalled today because of manufacturing defects. Here is another recall: The Maker of all humanity is recalling all units manufactured, regardless of make or year, due to a serious defect in the central component of the heart (Jeremiah 17:9). The defect is known as S-I-N and this defect will eventually ruin every unit that is not repaired (James 1:15). The original unit was extremely well-made (Genesis 1:31). The serious defect is due to a later malfunction in the original prototype, code name: Adam. This resulted in the reproduction of the same defect in all subsequent units (Romans 5:12). [Following Zeller’s analogy, this means that the manufacturer, God, is responsible for the defect, S-I-N.]

The defect is not limited to only one part of the unit; the problem has affected every part (Isaiah 1:6).  Some of the symptoms include loss of direction, uncontrollable acceleration to do evil, and foul vocal emissions (Mark 7:21-23). Even though the Manufacturer did not cause the problem [Yes, he did. He did, after all, manufacture the car. Your product Ford-Lincoln-Mecury God, so you are to blame for its defects.] He has offered a repair for every single unit (Luke 19:10). And this factory-authorized repair is provided absolutely free of charge (Isaiah 55:1), and is guaranteed to correct the defect. The Repair Technician has most generously offered to bear the entire burden of the staggering cost of these repairs. He didn’t pay in cash, nor with silver or gold, but with His own precious life blood (1 Peter 1:18).

The human being units not responding to this recall action will have to be consigned to a furnace and suffer eternal consequences (Matt. 13:42). The S-I-N defect will not be permitted to enter Heaven in order to prevent contamination of that facility (Rev. 21:27). [This means, then, that there will be no Christians in Heaven. I don’t know of one auto that has been totally repaired. If complete and total repair is required to enter God’s garage in the sky, it’s going to be mighty empty. Come join us in Hell, Evangelicals. The weather is grand, and junkers are welcome.]