Black Collar Crime: Evangelical Pastor Gary Ray Accused of Diverting Donations for His Own Use 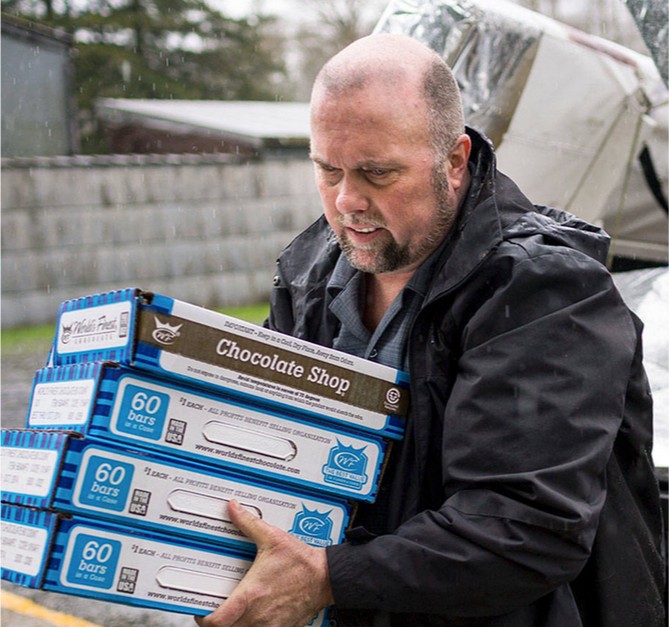 At the Oso Community Chapel, following the 2014 mudslide that killed 43 people, Ray is accused of stealing $40,000 in donations for the chapel and affected families. At least $6,000 also was reported taken from Restoration Church Camano, which Ray started and where he worked after being fired in 2014 from the Oso church, according to charging documents.

The investigation started on Camano when the Island County Sheriff’s Office was contacted in August 2017 with concerns of possible theft from the church. Investigators later learned about the Oso loss and an earlier problem with a church in California, according to reports.
Ray admitted he collected money under false pretenses at both local churches and transferred it into his personal bank account with no intention of using the money for the reasons given to donors, according to the investigative reports.

As pastor on Camano, Ray wrote several Meditation columns published in the Stanwood Camano News. In one from January 2015, Ray wrote, “… success should be pursued. … The prevailing view links success with wealth and status.”

The leadership of Oso Community Chapel understands that there are many questions regarding the recent allegations against former pastor Gary Ray. While the investigation is still ongoing and the impending court procedures are in their infancy, we are not in a position to respond to questions at this point. Oso Chapel always has and continues to operate with integrity and transparency concerning finances, ministry pertaining to mudslide families, and ministerial operations at large. The allegations against Gary Ray are not a reflection on the rest of the leadership during the time of his forced resignation, the current board and pastoral staff, nor the heart of the members of Oso Community Chapel.

We are deeply saddened that this has come about in the midst of the terrible tragedy of March 2014. We are confident that those in the community of Oso have seen the way in which the leadership of Oso Chapel and its members have endeavored to show the love of Christ through relationship and outreach. We are also confident in the strength of the entire community of Oso and in our ability to come together in the midst of a challenge such as this. We continue to pray, as we always do, for God’s love to pour out into every home and heart of all who are impacted by the slide, and now, those impacted by these recent allegations.

While I understand the church wants to be viewed as the victim here, before I am willing to give them a pass, I would like to know what oversight and controls were in place regarding church funds. Far too often, Evangelical pastors are given complete control over church finances and accounts. Churches “trust” that their pastors will be honest and ethical — and most of the time they are. However, I subscribe the the Ronald Reagan school of thought: Trust but Verify.

“I believe that all are here for a purpose, and that purpose is to love God and love others,” Ray told The Daily Herald in 2014. “… It is in times like these that character is developed, and by faith, hope is found.”

Ray started Restoration not long after the slide. The Oso chapel leaders were not on board with the plan, which created tension, according to court papers. There also were questions about his handling of money, though the timeline for that is unclear. He became frustrated when he was not allowed free rein with fundraising, police were told.

Ray was fired from the Oso church in May 2014, after about four years on the job. Many of the details were kept quiet. His bosses there later told investigators they checked with his former church in California, and it also described problems around him and finances.

At Restoration Church Camano, police believe that Ray wrote the bylaws in a way that avoided restrictions on his use of church funds. At that time, Ray reported that he was drawing an annual salary of $30,000, but it wasn’t in writing and others said that didn’t sound accurate.

A Baptist network affiliated with Restoration was sending Ray another $2,500 a month for the new church, deputies were told. He’d passed on the network’s offer to hire a bookkeeping firm. Members of the congregation, meanwhile, said they were told the Baptist network was handling Restoration’s accounts.

Among other allegations, people at Restoration said that Ray took up collections for projects that were not completed. In particular, prosecutors cited $6,000 raised, purportedly for new carpet. References to the money disappeared from the church’s records, and the carpet never showed up, according to court papers.

Some at the Camano church have alleged much greater losses.

Until the criminal investigation came to Oso, church leaders there were unaware of the $40,000 in reportedly diverted checks, prosecutors say. Those funds were in addition to about $350,000 that was donated to victims through the church, distributed and tracked. The chapel was one of several local and regional organizations that received and managed disaster relief efforts.