Once Again, Ken Ham Denies the Sufficiency of Scripture 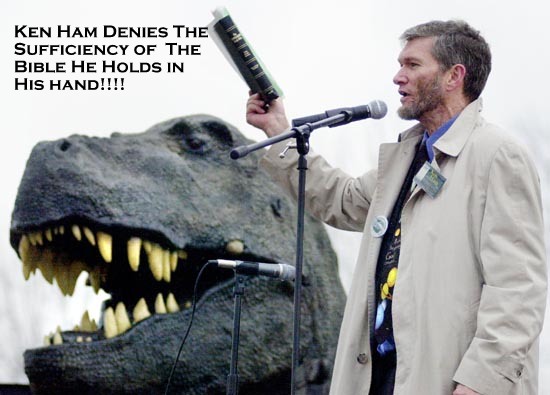 I previously wrote about that fact that Ken Ham, the CEO of Answers in Genesis, doesn’t really believe that the Bible is all-sufficient.  (Please see Ken Ham’s Ark Project Shows He Doesn’t Believe in the Sufficiency of Scripture.)  Evangelicals like Ham supposedly believe the Bible to be the inspired, inerrant, and infallible Word of God. I say supposedly, because upon closer examination of their orthopraxy (correct practice), Evangelicals are quite willing to ignore the Bible when it suits them.

Take Ham’s latest monument to Fundamentalist ignorance, the Ark Encounter: a life-size replica of Noah’s Ark. The Bible records in Genesis 6-9 the mythical story of Noah and the flood. According to the Bible, God, sickened and angered by the sin of human race, decided to use a global flood to kill everyone, save Noah and his family. Out of the millions of people on the face of the earth, only Noah, his wife, his sons and their wives, were deemed worthy of God’s grace (evidently Noah’s grandchildren didn’t make the cut).

God told Noah to prepare a big boat, by which he, Jehovah, would save Noah and his family. In Genesis 6:13-16, God gave Noah strict engineering plans to follow when building the ark:

And God said unto Noah, The end of all flesh is come before me; for the earth is filled with violence through them; and, behold, I will destroy them with the earth. Make thee an ark of gopher wood; rooms shalt thou make in the ark, and shalt pitch it within and without with pitch. And this is the fashion which thou shalt make it of: The length of the ark shall be three hundred cubits, the breadth of it fifty cubits, and the height of it thirty cubits. A window shalt thou make to the ark, and in a cubit shalt thou finish it above; and the door of the ark shalt thou set in the side thereof; with lower, second, and third stories shalt thou make it.

God told Noah to use gopher wood for the Ark’s construction. The word gopher is used only once in the Bible. Some English translations leave the word untranslated, while others, especially modern Bible versions, translate the Hebrew word as cypress or cedar. Knowing these things, imagine my surprise when I read that Ken Ham is using spruce trees (Englemann spruce) to build his replica of Noah’s Ark. Ham writes:

When you visit the Ark Encounter next year, one of the things that will just blow you away is the massive scope of the Ark and the colossal size of the trees that were used to construct it. We’ve heard people ask what type of trees they are and where they came from. The trees were standing dead Englemann spruce that were over 200 years old.

They were responsibly harvested from a forest in Utah. There are select forests managed by the forestry service where dead trees, before they begin to rot, are harvested and repurposed; then the forest is replanted for future harvests. What’s really nice about these gigantic 66 foot tall logs that are 50 inches in diameter is the fact that they are already dry, so they won’t move or twist once in place.

Why isn’t Ham using gopher wood? Surely, God meant what he said when he told Noah exactly what wood and dimensions to use in constructing the Ark. Evidently, Ham doesn’t really believe that the Bible is all-sufficient. If he did, he would either scour the earth looking for gopher wood or he would use cyprus/cedar to build the Ark. Instead, Ham chose a wood that met project engineering and cost requirements. In other words, he allowed modern science and mathematics to dictate the construction of his modern-day Ark. It is too bad that Ham can’t do the same when it comes to the creationist story of Genesis 1-3. Why does Ham demand a literalistic interpretation of Genesis 1-3, yet ignore this hermeneutic when choosing which wood to use for building the Ark? Ham demands that modern scientists bow to the authority of the Bible, yet he is quite willing to ignore it when it suits him.

Ham presents the Ark project as one that is environmentally responsible. Ham says the project’s spruce trees were “responsibly harvested from a forest in Utah.” What he fails to tell readers is why these trees were available for what Ham calls the “largest timber-frame structure in the world.” According to the The Salt Lake Tribune, spruce beetles have destroyed the state’s once burgeoning Englemann spruce population. In 2011, Brandon Loomis, a writer for The Tribune, wrote:

Some three-toed woodpecker in these woods is pleasantly plump on beetles, but the buffet can’t go on forever. It lasts only as long as the trees.

The gluttony is written on and around a stocky spruce that looks green and mostly healthy to the untrained eye, except for the fact that it’s pecked nude from the waist down.

No bird harmed the tree, though. The damage was already done.

“These trees are loaded with bugs,” said Liz Hebertson, a U.S. Forest Service entomologist, down from Ogden to survey this year’s spruce-beetle infestation in south-central Utah. Peeling back a neighboring spruce’s bark confirms that larvae are maturing, readying for the short flight of their lives in search of new pine prey.

It’s nothing new to her. Mountains of Utah’s verdant spruce slopes are gone. If climate scientists are right, they might never be back.

After a rain, Utah’s high spruce forests evoke the misty Pacific Northwest — unlikely lush islands rising from redrock desert and olive chaparral. Now a complex set of threats conspires to take them down.

One is natural — the beetle with a taste for older trees, aided by a decade of tree-stressing drought. Another is a century of fire suppression that built up fuels to the bursting point. Aiding both those killers is a rising thermometer.

Even if a warmer climate can again support Engelmann spruce — the state’s dominant commercial-grade tree — it will be 200 years or more until they grow back to the towering sentinels that 20th-century Utahns knew. In the meantime, subalpine firs may spring up in their place, replacing green for green but not with dollars. Subalpine firs are more brittle — not lumber material.

It’s been a losing battle so far, and science suggests it’s a long-run lost cause.

First, there’s the insect’s physiology and its response to increasing warmth. The cold-blooded spruce beetles in these hills once took two years to mature from the egg and fly on to breed in new trees. In the early 2000s, Hebertson said, forest scientists documented a switch to one-year cycles here, which boosted the population and primed a disaster.

Beetles have taken 2 million acres of Utah forest in roughly that time, the largest share of it spruce. The outbreak started in the 1990s around Cedar Breaks National Monument in southwestern Utah, where Hebertson has seen no evidence of spruce regeneration since.

The Forest Service has found that higher temperatures aid and speed beetle production. The Utah Climate Center at Utah State University finds that since 1970 the mercury has risen swiftly when it counts most — more than 3 degrees on average during bug-killing winter lows at a monitoring station at Capitol Reef National Park in southern-central Utah.

A decade of beetles-gone-wild might not spell doom in normal conditions. Big outbreaks have shown up before, and the spruce have rebounded. This time, though, computer models based on society’s carbon emissions aren’t looking good. They show Engelmann spruce practically blinking out in Utah by 2090, limited to a strand in the High Uintas.

The Bible does not speak directly about what we call global warming. It does, however, provide a framework for evaluating the merits of global warming claims. To reiterate, the global warming discussion centers on CO2 (the atmosphere) and trees (plants). The Bible, of course, addresses the atmosphere and plants. The biblical framework for evaluating global warming is primarily found in Genesis. The RATE study mentioned above established that Genesis 1:1 to 2:3 (the Creation account) was narrative. The study also determined that the Flood account (Genesis chapters 7 to 9) is also narrative (Vardiman et al. 2005, pp. 661 and 667). This paper will also briefly reference the dispersion of the nations at the tower of Babel in the summary. Although the RATE study did not evaluate the Tower of Babel, I believe that if the creation and the Flood passages are narrative then the tower of Babel passage is narrative also. These passages describe real events and real people. The following sections briefly discuss passages related to the atmosphere and plants.

The biblical history of the earth, contained in the first 11 chapters of the book of Genesis, provides a useful and sufficient framework for evaluating the current global warming issue. As we have seen, CO2 is a natural atmospheric gas that is essential for man’s existence. It is not a pollutant. The atmosphere is likely deficient in CO2 compared with the original created atmosphere. Reducing CO2 would definitely create problems, but increasing it will not. Burning fossil fuels merely returns CO2 to its place of origin. Forests are to be used for man’s benefit. They are not needed to produce O2 and they have no intrinsic rights, but should be managed responsibly and effectively.

It can be expected that several trends evident since the Flood, however, will continue: sea level will rise as polar glaciers continue to melt, and deserts will expand. These trends, as we have shown, have little to do with CO2, they are a consequence of a God ordained event, the Flood. Governments with either ocean boundaries or deserts should consider how to efficiently and economically address these trends. There is no viable justification either biblically or scientifically for limiting the generation of CO2 or restricting logging of forests.

When it comes to the type of wood to use for his colossal tinker toy project, Ham ignores the Bible and, instead, buys a wood that is affordable thanks to global warming. Yet, when it comes to the warming of the planet and what problems rising global temperatures will cause, Ham, Martin, and the “astute” scientists at Answers in Genesis, demand a return to a strict, literalistic reading of Genesis 1-3. Simply put, global warming is much ado about nothing, because…drum roll please, the BIBLE says. While Ham uses modern engineering practices and cost studies for building the Ark, he reverts to knuckle-dragging, young-earth-creationist talking points when it comes to global warming.

I wish Ken Ham would make up his mind about the sufficiency of the Bible. Either it’s God’ divine science textbook or it’s not. Either God did or he didn’t tell Noah everything he needed to know about building a large boat in the desert. Which is it? Or perhaps Ham, like all Evangelicals, gives lip service to the sufficiency of the Bible. When it suits him he demands literalism, but when necessary Ham is quite willing to abandon the all-sufficient Bible in favor of modern science and technology.