Ignoring Any History Before White People 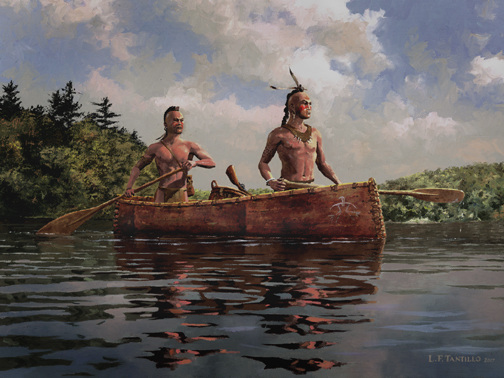 This post could also be titled, The Myths We Tell Our Children. The other day, I attended a sporting event for one of my granddaughters. As I was sitting there, a grandmother was explaining to her young grandson the history of The Great Black Swamp, and in particular Stryker, Ohio. Grandma breathlessly explained how the French “settled” the Stryker area. In her mind, local history began and ended with white people. Sadly, this view of history is all too common, especially in white monocultures such as rural northwest Ohio.

As Grandma regaled her grandson with stories of early French settlers, I snickered, thinking, Native Americans sure would find this history interesting. You see, long before white Europeans arrived on the scene, Iroquois, Wyandot, Hopewell, and Ottawa people roamed the forests, swamps, and waterways of northwest Ohio. While it is certainly true that the French established and platted the town of Stryker, that doesn’t mean that they were the first people to walk/inhabit the land. They weren’t. Sitting along the banks of the Tiffin River, Stryker developed into a prominent railroad town in the early years of the twentieth century. It is not a stretch of the imagination, however, to say that it is likely Native Americans paddled the waters of the Tiffin and camped near Stryker long before European interlopers claimed the land for their own.

Grandma’s history lesson should have, at the very least, included a mention of the people groups who lived in rural northwest Ohio centuries before the establishment of any of the communities local citizens now call home. Granted, Native Americans tended to be nomadic and didn’t leave permanent marks on the land, but that doesn’t mean they never traversed the land and waterways. They did, and children need to told this lest they develop uninformed, errant views of their “place” in our history.

Polly and I love to take day trips, driving the back roads and off beaten paths of rural northwest Ohio, northeast Indiana, and southern Michigan. As we drive along rivers and creeks, I try to envision how the land might have looked before white Europeans drained the swamps and cleared the land. This part of the United States was covered with vast forests, and home to a plethora of wildlife. It doesn’t take much imagination — at least for me — to have visions of Native Americans walking forested paths or river pathways as they hunted or moved from community to community.

In 1917, Nevin Winter wrote a book titled: The History of Northwest Ohio: A Narrative Account of Its Historical Progress and Development from the First European Exploration of the Maumee and Sandusky Valleys and Adjacent Shores of Lake Erie, down to the Present Time. This title aptly describes how most denizens of northwest Ohio view their history. Unfortunately, it is a narrative that tells the truth as far as it goes but leaves out crucial stories and details that paint a fuller picture of who it was that first called these lands home.

The progressive path towards inclusiveness begins with a proper understanding of American and world history. As long as American children are taught a white, eurocentric view of the world, we can expect racism and bigotry to continue — particularly here in rural northwest Ohio. Children become adults, and pass on these half-truths to their children, perpetuating the lie that the Americas were an unihabited land ripe for the picking; that native people really didn’t want the land.

My editor mentioned a good book on this subject, Howard Zinn’s seminal work, A People’s History of the United States.