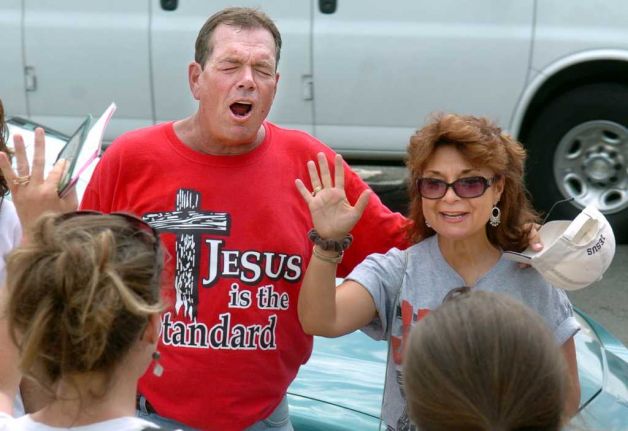 Flip Benham, a virulent anti-abortion preacher, was arrested for threatening a volunteer at a Charlotte, North Carolina woman’s clinic.

Concord pastor Phillip “Flip” Benham was arrested for threatening a volunteer at a Charlotte woman’s clinic.

The pastor, who holds rallies with dozens of people throughout the week, especially at woman’s clinics that provide abortions, told Channel 9 the arrest was “bogus.”

A volunteer at A Preferred Woman’s Health Clinic on Latrobe Drive in Charlotte claims the pastor threatened her life during one of his rallies.

The clinic’s director told Channel 9 in a statement that they are scared by the group’s “pattern of violence.”

The volunteer said Benham approached her and “menacingly” and “repeatedly” told her, “You are dead,” and was fearing the threat would be carried out.

“There has never has been one convicted act of violence there at all. I’ve been there 17 years,” Benham said.

Benham claims he did not threaten the clinic volunteer, but rather said she was “dead in her sins.”

He said he was referring to the Christian principles that don’t align with abortion.

Benham told Channel 9’s Stephanie Tinoco that he has worked to stand up for unborn children and has been arrested dozens of time.

He said he will gladly sit in a cell for the cause. He said he lost count how many times he’s been arrested.

“We care about choice. We know that God has called all of us to make a choice. And only we have that choice. We want to help them,” Benham said.

Benham said he wants women to know if they’re willing, his crew is willing to help them get through an unwanted pregnancy and choose life.

I am convinced that Evangelicals have so prostituted themselves on behalf of the Republican Party that they lost any sense of decency, ethics, and morality. Take Flip Benham, director of Operation Save America:

Judge Roy Moore graduated from West Point and then went on into the service, served in Vietnam and then came back and was in law school. All of the ladies, or many of the ladies that he possibly could have married were not available then, they were already married, maybe, somewhere. So he looked in a different direction and always with the [permission of the] parents of younger ladies … He did that because there is something about a purity of a young woman, there is something that is good, that’s true, that’s straight and he looked for that. (Crooks and Liars)

There’s something about the PURITY of a teen girl? Yes, he actually said that. Benham’s argument seems to be that all the older women were being fucked by men and were married, so Moore had to seek out teen girls who had not yet lost their virginity. We should be very glad that all the teen girls weren’t “impure.” Moore would have then had to seek out prepubescent girls to meet his purity standard.

The Sounds of Fundamentalism: Giving God the Middle Finger by Flip Benham

This is the one hundred and twenty-seventh installment in The Sounds of Fundamentalism series. This is a series that I would like readers to help me with. If you know of a video clip that shows the crazy, cantankerous, or contradictory side of Evangelical Christianity, please send me an email with the name or link to the video. Please do not leave suggestions in the comment section.  Let’s have some fun!

Today’s Sound of Fundamentalism is a video clip of Flip Benham  blaming the recent spate of violence in Charlotte on Transgenders, abortion providers, and Charlotte City Council ignoring the teachings of the Bible.