How I Answered Science Questions When I was an IFB Pastor

As a Baptist pastor, how did I answer science questions? The short answer is . . . I didn’t.

I was five years old when my parents joined Tim LaHaye’s church, Scott Memorial Baptist Church in San Diego, California. I would remain associated with the Evangelical church for the next forty-five years, pastoring churches in Texas, Ohio, and Michigan. Whether as a church member or as a pastor, I and the world I was a part of were insulated from secular science. As a pastor, I rarely had someone ask me a science question, and the reason for this is quite simple. I believed and taught others to believe:

Besides the Bible, we Fundamentalists had our own science books and scientists. My favorite Evangelical “scientists” were Henry Morris and John Whitcomb. Morris had a degree in engineering, Whitcomb a degree in theology. Even though their books contradicted accepted scientific facts, they had a high view of Scripture and accepted the Bible as the final answer to every question, so their books carried great weight in many Evangelical circles. I have no doubt that if I were still a pastor I would have taken church groups to the Creation Museum — Ken Ham’s monument to ignorance — so we could see the “proof” of our creationist beliefs.

The children in the churches I pastored were largely insulated from the world. Many of the children were homeschooled or attended private Christian schools. Children were not encouraged to go to college, especially wicked secular colleges. The highest calling for a woman was to marry a godly man and bear children, and the highest calling for a man was to become a preacher or a missionary. All other vocations were considered inferior.

I have very little science training. I took a general science class in 9th grade, biology in 10th grade, and biology in college. My college biology class was an absolute waste of time. No lab. No experimentation. The teacher, a local pastor, read to us from a biology book published by a Christian book publisher. The only thing I remember from my college biology class (the same class my wife took) was the teacher’s lecture on not marrying outside of your class, religion, or race. He was quite bigoted and racist.

The few times I was asked a science question that challenged my creationist beliefs I replied:

This was the answer I gave for almost every challenge to what I taught.

There are thousands and thousands of American churches and pastors who hold similar views. The United States is one of the most scientifically advanced nations on earth, yet, at the same time, we are quite ignorant about basic scientific facts. We can thank religion for our collective ignorance.

Why and How I Started Christian Schools — Part Two 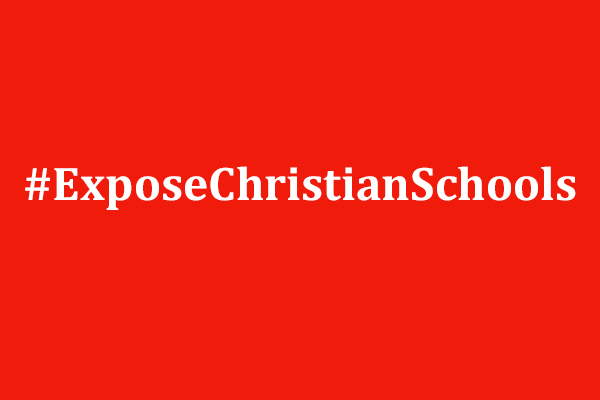 Why and How I Started Christian Schools Part One

In August 1989, Somerset Baptist Academy (SBA) — a ministry of Somerset Baptist Church, Mt. Perry, Ohio — opened its doors to fifteen students. SBA was a tuition-free kindergarten-through-grade-twelve, non-chartered private school. SBA did not accept students from outside the church. Parents were required to:

The day-to-day operation of SBA fell to me as the pastor of Somerset Baptist Church. My wife, Polly, taught the younger children, along with teaching the older students English, spelling, and writing. Several church members helped teach subjects such as history and shop. I taught the math, science, history, computer, and Bible classes for the older students. Physical education consisted of playing games outside and taking hikes. Former students have fond memories of playing kickball in the church’s gravel parking lot.

Our mobile home was parked fifty feet away from the school/church. A dear older woman in our church cared for our younger children while Polly and I taught our respective classes. Polly was eight months pregnant when SBA opened its doors. She would give birth to our first daughter in September 1989, our second daughter in 1991, and our fourth son in 1993. That’s right, Polly had three babies during the five years SBA was open. Both of us got up early, stayed up late, and spent years “living” on 5-6 hours of sleep a night. Add my pastoral duties to the mix, and Polly and I worked non-stop seven days a week. We worked this way because we sincerely believed God wanted us to train the church’s children in the ways of God. It was our duty to prepare the next generation for service.

SBA was a one room school. All the students met in a large basement room. The room was outfitted with desks given to us by the local school district, a teacher’s desk, and a large chalkboard. In another room, students had cubbyholes to keep their books and hooks on which to hang their coats. There was no kitchen to speak of, so students were expected to pack their lunches. In the winter, the building was heated with wood and coal. Older students were expected to help stoke the wood stove and, if necessary split wood. The highlight of the one school year was when the well-casing wood stove vent pipe plugged up and filled the building with dense smoke. It took us two days to clean the building and make it ready for the students to return. (For you not familiar with well casing, it is the steel pipe used in drilling oil/gas wells. There were a lot of such wells in the area, so one member found a long section of pipe and adapted it for use with the school’s wood stove.)

Of the fifteen students, only three had previously attended a Christian school — my two oldest sons and one church girl. The other twelve had been public school students. All of the students came from poor working-class families. (The highest paid man in the church made $21,000 a year as a certified GM auto mechanic. None of the women, save one, worked outside of the home.)  Many of them had previously not done well in school. Using a one room school approach allowed us to teach students at their academic levels, and not their age/grade levels. For example, I taught math. All of the students were required to take timed mathematics facts tests. Students hated these tests, but they knew the only way out of them was to pass them in the time allowed. There were several high school students who had third grade math proficiency. They had a hard time with these tests. I didn’t cut these students any slack, expecting them to master the addition, subtraction, multiplication, and division tables.

To this day, I believe that our one room school approach helped students who were struggling in various academic areas. This approach allowed us to give them one-on-one attention. I determined at the start that SBA would focus on the basics: reading, writing, spelling, English, and arithmetic. My belief, then, and today: teach a child to read and he or she can master anything. According to what former students have told us, we succeeded on this front. Polly, in particular, was mentioned as the one person who helped them the most when it came to reading. She was, and remains, a gem!

The first school year, I decided we would go old-school and use McGufffey Readers for grades 1-6. Dumb idea. Students struggled with the arcane language and illustrations. Older students used Mennonite textbooks published by Rod & Staff. For several single student classes, SBA used self-directed study programs. After the first year, we did away with the McGuffey Readers and started using Rod & Staff materials throughout the school. I taught the older students an introduction to computers. This was a hands-on class. In this regard, we were ahead of what local public school students were taught about computers.

Annually, students took the Iowa or Stanford achievement tests. I believed the tests would provide evidence for student progress. Year to year, every student improved, so whatever SBA’s shortcomings were, students were getting a good education. Good, with respect to the things we taught them. Students received a narrow, religiously-defined education, so there were holes in their educations when compared to public school programs. This was especially true when it came to higher math and science.

Religion, of course, was central to the life of SBA. Students were required to memorize passages from the King James Bible, The Westminster Confession of Faith, and the 1689 London Baptist Confession of Faith. School days were opened with prayer, though readers might be surprised to learn that students did not recite the Pledge of Allegiance. I was opposed to such recitations because I believed our allegiance belonged to God alone, and not the State. While a large U.S. flag hung on the wall in back of the church’s platform, a pledge to that flag was never uttered in the eleven years I was pastor.

As a non-chartered private religious school, SBA was exempt from state regulation. Local schools were required to give us the records of students enrolled at SBA. Outside of this, SBA had no contact with state or local officials. SBA did, however, run into a problem with the EPA. One day, an EPA investigator showed up and told me that since there was a school operating at the church, its water supply would be designated as a public water supply. We had to drill a new well ($2,000, paid by Polly’s parents), and submit water test reports every three months. One time, I thought the testing bottle had some contamination, so I washed it out with rubbing alcohol. Guess what happened next? Yeah, stupid move, Bruce. After submitting our next sample, the EPA notified us that we had a contaminant in our water supply. I explained what happened — silly, stupid me — but the EPA still required us to publish a notice in the local newspaper saying that our water system had failed its latest test and the steps we were taking to remedy that problem.

In my final post, I want to talk about how we handled discipline and what became of the children educated at Somerset Baptist Academy.