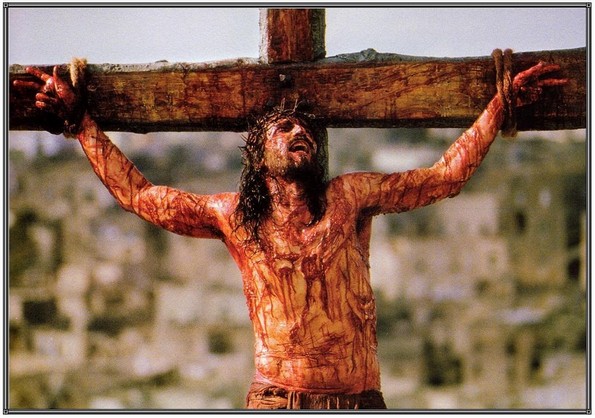 When the movie The Passion of the Christ was released 12 years ago, Hollywood insiders mocked it because it offered a realistic—and extremely bloody—depiction of Jesus’ torture and death. Regardless of what you think of controversial director Mel Gibson, he did a masterful job of capturing the brutality of a first-century Roman execution.

I know some Christians who objected to the R-rated violence of Gibson’s movie, as if what happened to Jesus should be reduced to the sanitized charm of a Renaissance-era painting. But the truth is that what Jesus suffered on Good Friday was R-rated. It was spattered with blood and horrifying to watch.

Nobody performed an autopsy on Jesus’ mangled body after He was taken down from the cross. But doctors who have studied the Bible’s description of His death say the pain would have been beyond excruciating. In fact, the word excruciating means “out of the cross.” Jesus literally defined the worst pain anyone could feel.

His suffering began in Gethsemane, when God laid the sins of the world on His beloved Son. Hebrews 5:7 says Jesus offered up prayers “with loud crying and tears” during this moment of anguish. Luke’s Gospel says the agony was so strong that Jesus’ sweat “became like drops of blood, falling down upon the ground” (Luke 22:44). The intense stress caused what physicians call hematidrosis, a condition in which blood seeps out of sweat glands.

After His arrest, Jesus was flogged so mercilessly that his skin was stripped off His back, exposing muscle and bone. The soldiers who tortured Jesus would have used a weapon called a flagellum—a whip that had several leather strands with lead balls or shards of bone attached to the ends.

The cuts inflicted by this whip could actually rip open the flesh and expose internal organs. Jesus would have lost a significant amount of blood after His scourging—and this would explain why He did not have the strength to carry His cross all the way to Calvary.

Matthew 27:28-29 says the Roman soldiers stripped Jesus naked and then twisted together a handmade crown made of thorns to mock His kingship. Bible scholars believe these thorns were extremely long and hard. When the thorns pierced the top and side of His head, Jesus would have most likely experienced what doctors call “trigeminal neuralgia”—piercing pain all over the head and face.

After this merciless abuse, Jesus was covered with a red robe and led to Golgotha. There, Roman soldiers drove seven-inch metal spikes into his wrists (most likely hitting the median nerve, causing more blinding pain) and then they rammed another spike into his feet.

At that point, doctors say, Jesus would have suffered dislocation of His shoulders, cramps and spasms, dehydration from severe blood loss, fluid in His lungs and eventual lung collapse and heart failure.

Yet Jesus refused to drink wine mixed with gall, a pain-killing solution offered to Him by his executioners (Matt. 27:34). He chose to endure the full impact of the pain.

He felt that pain for us.

Some victims of Roman crucifixion took as long as nine days to die, but Jesus’ death came in a matter of hours—probably because He had been flogged so cruelly before He was nailed to the rough wood. Victims of crucifixion typically developed serious dehydration because of a lack of blood and oxygen.

As Jesus took His last breath, He said: “It is finished.” He was actually quoting the last verse of Psalm 22, a psalm He recited throughout His torture. It is one of the most graphic prophecies about Christ’s suffering in the Old Testament—and Jesus knew it was about Him.

Jesus willingly poured out His blood on that cruel cross. It was an ugly, revolting, disgusting scene. We don’t have to downplay the violence or muffle the gut-wrenching cries. The Bible does not soften the impact or censor the cruelty of Jesus’s suffering. Isaiah 53:6 says: “But the Lord has caused the iniquity of us all to fall on Him.”

Keep in mind that most of what Grady writes is personal opinion. He has no evidence for many of the claims he makes about the brutality of Christ’s crucifixion and death. Compare Luke 22,23 with what Grady has written and you will quickly see that he has turned the death of Christ into a Christian version of No Company for Old Men.

Why does Grady graphically depict Christ’s execution? Grady wants readers to know that Easter is not about fun, games, candy, and the Easter Bunny. Oh no, Easter is all about the brutalization of Jesus by God, the Father. Grady writes:

This Easter, please don’t settle for a G-rated, greeting-card version of the cross. Consider the depths of the agony Jesus experienced when He died for you. He took the pain we deserved.

There’s the reason — the substitutionary death of Jesus. Sinners need saving, can’t save themselves, so Jesus was brutally tortured, died, and rose again from the dead so sinners could have their sins forgiven and live in heaven after they die. Look at all that Jesus suffered for us! When Christians whine and complain about how hard it is to be a Christian in the most Christian nation on the face of the earth, they are often reminded of the Jesus’ gruesome death on their behalf. No one has ever suffered like Jesus, preachers say. Really? People face all sorts of horrible suffering, in every way as bad and as painful as that of Jesus. Of course, their suffering is due to sin. Jesus suffered because he was an awesome guy and wanted to start a cult. Jesus Suffering-1 Human Suffering-0

The Passion of the Christ received enthusiastic support from the American evangelical community. Prior to the film’s release, Gibson actively reached out to evangelical leaders seeking their support and feedback. With their help, Gibson organized and attended a series of prerelease screenings for evangelical audiences and discussed the making of the film and his personal faith. In June 2003 he screened the film for 800 pastors attending a leadership conference at New Life Church, pastored by Ted Haggard, then president of the National Association of Evangelicals. Gibson gave similar showings at Joel Osteen’s Lakewood Church, Greg Laurie’s Harvest Christian Fellowship, and to 3,600 pastors at a conference at Rick Warren’s Saddleback Church in Lake Forest. From the summer of 2003 to the film’s release in February 2004, portions or rough cuts of the film were shown to over eighty audiences—many of which were evangelical audiences. Gibson received numerous public endorsements from evangelical leaders, including Billy Graham, Robert Schuller, Darrell Bock, and David Neff, editor of Christianity Today. In an open letter published prior to the film’s release, James Dobson, the founder and chairman of Focus on the Family, endorsed the film and defended it against its detractors. Similar public endorsements of the film were received from evangelical leaders Pat Robertson, Rick Warren, Lee Strobel, Jerry Falwell, Max Lucado, Tim LaHaye and Chuck Colson.

Twelve years later, no revival. The movie — called by Roger Ebert the most violent movie he had ever seen — grossed over 600 million. Gibson, an anti-semitic, violent Catholic, made a killing off the movie, and everyone else moved on to the next big movie. Last week, Fox aired The Passion Live — a live two-hour show depicting the last hours of Jesus’ life. Surely, on a Sunday, tens of millions of Christians tuned into The Passion, right? Nope. According to TV Line:

Fox’s live-ish Sunday broadcast of The Passion drew 6.6 million total viewers and a 1.6 demo rating, down 46 and 63 percent from what the network’s Grease: Live delivered in January (albeit when there was no Walking Dead in the mix).

In fact, the Tyler Perry-hosted musical event placed even below NBC’s Peter Pan Live, which in December 2014 delivered 9.2 mil and a 2.4, on a Thursday.

Here’s what Grady and Fox need to understand: the death of Jesus is passé. Been there, done that — boring. In Grady’s case, he needs to understand that telling Bible stories filled with blood, gore, and violence no longer interests most Americans. We have The Walking Dead and Game of Thrones. Jesus’ death, no matter how graphicly it is displayed, is no match for modern TV dramas. Bruce, you are sooo going to hell for saying this. Yeah, about the hell thing…