Dear Evangelical, Here’s The Number One Reason We Can’t be Friends 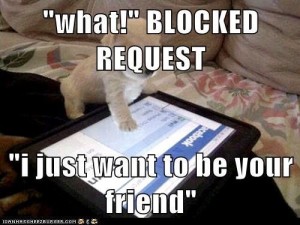 It is not uncommon for me to receive emails and Facebook friend requests from Evangelicals who really, really, really want to be my friend. These What a Friend We Have in Jesus Christians think that the reason I am no longer a follower of Jesus is because I never had good Christian friends. In fact, during my years as an Evangelical church member and pastor, I had countless friends, including several men I would have considered my BFFs — best friends forever. (These best friends of mine had a different definition of forever, abandoning me once I started having doubts about Christianity and my faith.)

In November 2008, my divorce from Jesus was final, and those who once called me friend turned to praying for me, preaching sermons about me, gossiping about me, and sending me caustic, judgmental emails. Into this friendless void jump Evangelicals eager to be “real” friends with Bruce Gerencser, the Evangelical pastor-turned-atheist. Why do these friendship seekers want to be friends with me?

Some of them naïvely think that if I am just willing to be exposed to their kind, compassionate, loving version of Christianity that I will somehow, some way, be drawn back into the Evangelical fold. Their goal is the restoration of Bruce Gerencser. In other words, their offer of friendship has an ulterior motive — to win me back to Jesus.

Such attempts to be friends with me irritate the hell out me. I hate it when people, regardless of the reason, have ulterior motives when contacting me. Generally, I can spot ulterior motives a mile away. Depending of my mood, I might respond to these secret agents for Jesus by asking, what is it that you REALLY want?  Cut the bullshit and tell me what it is you really want from me.

I have zero interest in having meaningful friendships with Evangelicals. I am fine with being acquainted with or doing business with Evangelicals, but I have no desire to have them over for dinner or to get our families together on the Fourth of July. And the reasons for this are not what Evangelicals might think. No, I don’t hate God, Christianity, or the Bible. None of the reasons Evangelicals think atheists are “unfriendly” apply here. Not that I am unfriendly. People who know me — saved or lost — know that I am a kind, compassionate, loving man with, when provoked, a bit of a quick-to-rise-and-recede redheaded temper. I am kind to animals, don’t step on ants, and don’t kill spiders. I lovingly endure my grandchildren jumping on me as if they are fighting in a MMA match, even though my body screams in pain.  I love my friends, neighbors, and family. I get along well with others, even when put in circumstances made difficult by the airing political and religious viewpoints I oppose. Simply put, on most days, I am a good man, brother, husband, father, and grandfather. Like everyone, I fall short in my relationships with others. When I hurt those who matter to me, I do my best to make things right. So whatever stereotype these friendship seekers might have of atheists, I don’t fit the bill.

The one and only reason I don’t befriend Evangelicals is their belief about hell.  Evangelicals believe that all humans are sinners, and without putting their faith and trust in Jesus Christ they will go to hell — a place where all non-Christians spend eternity suffering eternal damnation in utter darkness and searing flames. Knowing that the high temperatures in hell (and later, the Lake of Fire) would turn unsaved humans into sizzling grease spots, the Evangelical God of love gives them bodies capable of enduring never-ending pain and suffering. What a wonderful God, right?

I will soon be sixty years old. Sometime beyond this moment, I will draw my last breath. According to Evangelicals, the very next moment after I close my eyes in death, I will awake in hell, ready to begin my eternal sentence of unimaginable pain and suffering. (A theological point in passing. Most Evangelicals believe what I just wrote; however, according to orthodox Christian theology, God doesn’t give the saved and lost new bodies until Resurrection Day. So, I am not sure what it is that suffers when I land in hell, but it won’t be my body. Maybe my suffering will come from my mind be subjected to a never-ending loop of Evangelical sermons and praise and worship ditties.)

Why, you ask, will I be tortured by God in hell for eternity? One reason, and one reason alone — I do not believe Jesus is anything Christians say he is. And since Jesus is not God, not a Savior, and not divine in any way, and I see no evidence of his eternal existence in the present world, I have no reason to worship him. No matter how good a man I might be, all that matters when it comes to an eternity spent in heaven or hell is if I have checked the box on the Evangelical decision card that says: Yes, I prayed the sinner’s prayer and asked Jesus to forgive me and save me from my sins.

So, I ask you, WHY in the names of all humanity’s gods would I want to be friends with anyone who thinks I deserve to be put on the Evangelical God’s rack and stretched for years without end? You see, dear friendship seeker, it is your belief about hell and my eternal destiny that makes it impossible for me to be your friend. No, hell isn’t real, and I don’t fear what may come of me after death, but you believe these things to be true and they stand in the way of us having a meaningful friendship. I am thoroughly convinced that in this life and this life alone do I have immortality. Once death claims me for its own, I will cease to be. Those who were friends with me, will hopefully toast my life, telling their favorite Bruce stories. In time, as is the case for all of us, I will be but a fading memory, a mere blip on the screen of human life.

Bruce, surely you can ignore their beliefs about hell and accept their offer of friendship. Sure, I could, but why should I? Why would I want to be friends with someone who thinks I deserve eternal punishment, who thinks I have done anything to deserve being endlessly tortured by God. Life is too short for me to give my friendship to people who believe their God plans to eternally roast me in the Lake of Fire if I don’t believe as they do.

These days, I have two Evangelical friends, whom I have known for fifty years and thirty years, respectfully. Our friendship works because we do not discuss religion or politics (unless asked). We have many things in common — children, grandchildren, love of good food, Cincinnati Reds — so we have no need to talk about the things not spoken of in polite company. I remain their friends, first, because I love them, and second, because I have a lot of years invested in our friendship. If these dear friends of mine were new acquaintances today, I highly doubt we would be friends.

Well, fine, Bruce, I WON’T be friends with you!!!  Okey dokey, smoky, don’t let the door hit your ass on the way out. I am too old to care whether someone is my friend or likes me. These days, my friend list is short, but those who are on it love and support me, and I am grateful for them being in my life. To Evangelicals who are butt-hurt because I won’t play in the sandbox with them, I say this: pick a new God who is not a violent, murderous psychopath and worship her. Then maybe, just maybe, we can be friends. As long as you hold the company line concerning sin, death, judgment, and hell, I will not be your friend.