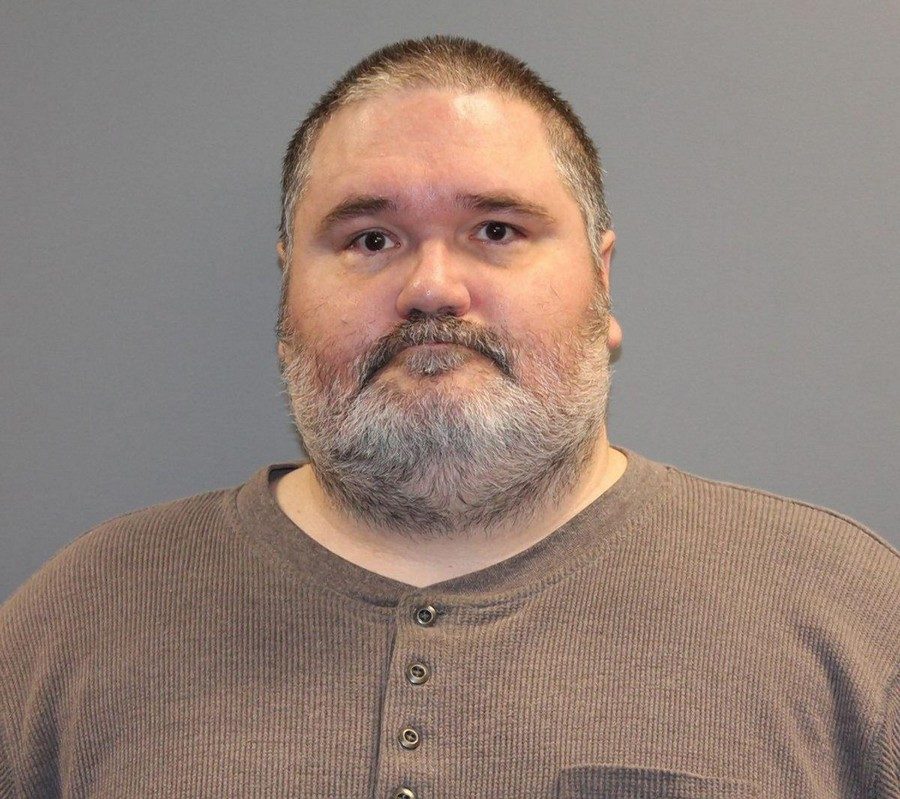 The associate pastor of Holy Childhood Church and school in Mascoutah was taken into police custody Monday morning, according to the state’s attorney.

The priest was identified as the Rev. Gerald R. Hechenberger.

“We have been working with Belleville (Police) and the task force for several weeks and we anticipate they will be submitting evidence collected pursuant to a search warrant we issued within the next 48 hours to be reviewed for charges involving Gerald Hechenberger,” St. Clair County State’s Attorney Brendan Kelly said.

Earlier in the day, Belleville Police issued a statement saying a Mascoutah resident was identified as being in possession of child pornography, but the police statement did not identify the resident. A police captain confirmed that Belleville police officers were at the church at 419 East Church St. around 7 a.m. Monday.

A statement from Bishop Edward K. Braxton said Hechenberger was taken into custody by St. Clair County authorities, but did not say why.

“This is a very serious matter for Father Hechenberger,” the diocese statement said. “At this point, the diocese has no reason to believe that any parishioners are affected by this matter. The diocese is awaiting an update on information from the civil authorities, and has assured them of the diocese’s full cooperation.”

“Good morning, Father Jerry is under investigation. We will share more information when we have it. Your children are safe and sound — primary children are enjoying lunch! Blessings, Claudia,” the email read.

The email, sent at 10:51 a.m., followed a previous message from Dougherty sent at 8:15 a.m., which read, “Good morning, the Belleville police are at the rectory/church. I was notified that they were there, however was not informed as to why. Your children are here, they are safe and sound. Please know that we keep a close eye on all of them! Blessings, Claudia.”

The priest at St. John the Baptist parish in Smithton abruptly took a leave of absence last week to address “very serious personal, pastoral and legal challenges,” according to a letter circulated by the Belleville Diocese.

The letter, obtained by the Post-Dispatch, said the Rev. Gerald R. Hechenberger spoke with Belleville Bishop Edward Braxton and agreed the temporary leave was necessary. The letter, sent to priests and deacons, didn’t directly state the source of the challenges.

“In the present climate, it is important for you to know that the serious matters we are addressing do not involve the abuse of a minor,” wrote the Rev. John McEvilly, the diocese’s vicar general.

It added: “It will probably be several months before it can be determined when or if Father Hechenberger will be able to return to parish ministry.”

A Catholic priest with a checkered history was arrested on child pornography and drug charges.

Rev. Gerald R. Hechenberger of the Holy Childhood Catholic Church in Mascoutah, Illinois, was arrested on Monday morning and held on $2 million bail.

Acting on a tip from the Attorney General’s task force, police seized electronic devices at the church and found multiple photographs and a video involving children under the age of 13.

“It is unknown at this time if Hechenberger produced any of the images himself, or if he has had any inappropriate contact with children directly,” the Belleville police said, adding that parents with suspicions regarding the priest’s behavior should contact authorities.

Hechenberger was charged with drunken driving in 1983 and driving under the influence in 1989, although both charges were later dismissed.

In 2004, Hechenberger pleaded guilty to trespassing after he was found shirtless in a parking lot, according to a police report cited by the News-Democrat.

May the Peace of Jesus Christ be with all of you!

I am writing to you concerning the very sad and distressing event of the departure of the Reverend Gerald R. Hechenberger, who had served as Associate Pastor of your parishes from August 15, 2014 until I relieved him of his positions on January10, 2018. Since he was arrested, taken into custody by law enforcement authorities, and charged with multiple felonies having to do with the possession and dissemination of inappropriate images of children and the drug crystal methamphetamine on January 8, 2018, I have been praying for all of you. I have been praying in a special way for anyone who may have been adversely affected directly or indirectly by his behavior. I am praying for Father Hechenberger as well. I am deeply sorry for the distress that these events may have caused you and your families, especially your dear children.

I am aware that you may have questions about many aspects of this scandalous event. I will answer some of your questions in this letter. However, I cannot answer all of your questions because, like you, I do not know the answers. For, example, like you, I do not know what the eventual legal consequences of all of this will be for Father Hechenberger. The Diocese has assured civil authorities of its full cooperation. I write not from a legal perspective but from the perspective of your Bishop. I write with a genuine pastoral concern for the personal and spiritual wellbeing of each of you and everyone in the Diocese of Belleville. For this reason, counselors have already been made available to the communities involved. I have also informed Father Wienhoff that I would be happy to meet with him and representatives from your parishes to listen to your observations and discuss these matters further, if that would be beneficial.

First, I must assure you that neither I, nor my Vicar General, Monsignor John W. McEvilly, nor your Pastor, Reverend Paul R. Wienhoff, nor any Diocesan personnel had any knowledge that Father Hechenberger had inappropriate images of minor children in his possession before the morning of his arrest. We have no record of any allegations of any prior possession of such materials. His files do not contain any expressions of concern in this regard from priests, parishioners, parents, or staff members and any of his previous pastoral assignments. We have no documents suggesting any past misconduct with minors. Our records show that he was compliant with our Diocesan Child Protection Policy through September 19, 2017, when his refresher course expired. Compliance includes clear background checks conducted by the Department of Child and Family Services, specific to child abuse allegations (CANTS) and a name­based criminal investigation through the Illinois State Police. None of his prior leaves of absence or sabbaticals were related to allegations of inappropriate conduct with minors.

Second, because of the serious charges filed against him, I have placed Father Hechenberger on Administrative Leave from ministry when I terminated his pastoral assignments. I further instructed him not to exercise the ministry of the Priesthood at any time in any place. Nor may he present himself in public as a Priest. Therefore, he is not to wear clerical attire including the Roman collar.

Third, when I met with Father Hechenberger at the St. Clair County Jail on Tuesday morning, January 16, 2018, he asked me to express to all of you how deeply remorseful he is for the pain, confusion, frustration, and anger that he has caused you and everyone in the Diocese. He specifically asked me to tell you that he has never physically harmed or abused a child in any circumstance throughout his years of ministry. He wanted me to assure you of his prayers for you and he asks that you pray for him as well. Obviously, considering the seriousness of his offense, he is aware that some of you might find his expressions of sorrow and regret to be insufficient to warrant your forgiveness, or even your prayers.

Fourth, when something of this nature happens, it is only natural to think that surely someone must have known that this was happening or at least that it was a possibility. But we all know that there is no fool­proof way of knowing what misdeeds a person might commit, even if they are receiving counseling for unrelated matters. Every human being is quite complex and some individuals might be unaware themselves of things they might do in certain circumstances.

Finally, I am aware that events such as this, involving only one priest, have the potential of casting a cloud of suspicion or mistrust over other priests. I ask you to remember that we are all redeemed sinners who must make every effort to avoid judging others. Please renew your support, concern, encouragement, appreciation and affection for all of our priests who serve you so unselfishly in this Diocese. Pray for them as well, as they pray for you at every Mass.

In this Sunday morning’s gospel, Jesus proclaims: “This is the time of fulfillment. The kingdom of God is at hand. Repent, and believe in the Gospel.” We all, priests and people alike, need to hear and heed these words, today more than ever.

Let us all pray for one another!

Specifically, they want to know whether any local children were abused — and to what extent the diocese knew about the Rev. Gerald Hechenberger’s troubled past when they assigned him to Mascoutah.

The community also asks why the diocese won’t provide answers.

On Jan. 9, Hechenberger, former associate pastor of Holy Childhood Church and School in Mascoutah, was charged with possessing and distributing child pornography and possession of methamphetamine.

“I think it would be a good idea to explain why this man was passed along and say, ‘why did you do that?’ and not just leave us in the dark,” said Sandra Parks, a former Holy Childhood school board member. “I just wish Bishop Braxton would explain why, in the light of these problems, you would retain and pass the problems along to the next place.”

Bishop Edward K. Braxton did not respond to repeated requests for comment from the BND.

Hechenberger also declined a request for an interview. He has been freed on $25,000 cash for bond after a judge lowered his original $2 million bail.

In response to the charges, a lifelong friend of Hechenberger’s, Anne Hannigan of Belleville, said Hechenberger has a drug problem and blamed the church for not helping the priest with his addiction.

Hannigan, who said she’s been friends with the priest for 40 years, said the church knew of Hechenberger’s alleged drug problem about five years ago and did not offer him help in fighting his addiction.