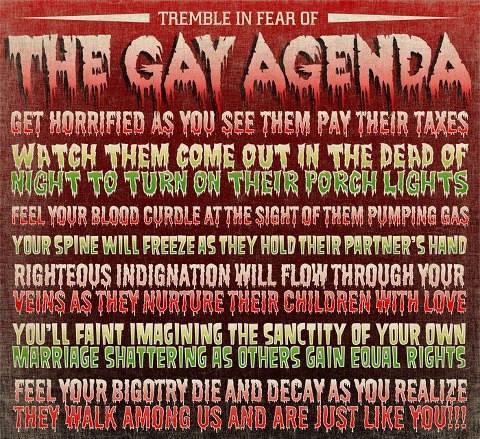 Monday, September 23, Montpelier, Ohio native Cory Calvin will be giving a presentation at the Defiance Public Library about his “coming out journey” and success as an entrepreneur. Calvin remained a closeted gay man during his formative years in rural northwest Ohio. After graduation from high school, Calvin moved away, ultimately landing in New York City. It was there that Calvin “first had the opportunity to begin outwardly discovering my sexuality and learning who I truly was.” His goal in life is to help others be their “authentic self.”

Calvin describes himself as a “global trekker, family guy, infamous uncle, best friend, meditator, aspiring yogi, hopeful romantic.” And, he’s gay. And it is the gay part of his story that has local Christian Fundamentalists readying a pyre for Calvin when he shows his wicked LGBTQ face at the local library. One such homo-hater is Pastor Perry Porter. Now, Porter will vehemently object to being called a hater, but his words leave no doubt as to what he thinks and feels about Calvin and his ilk. 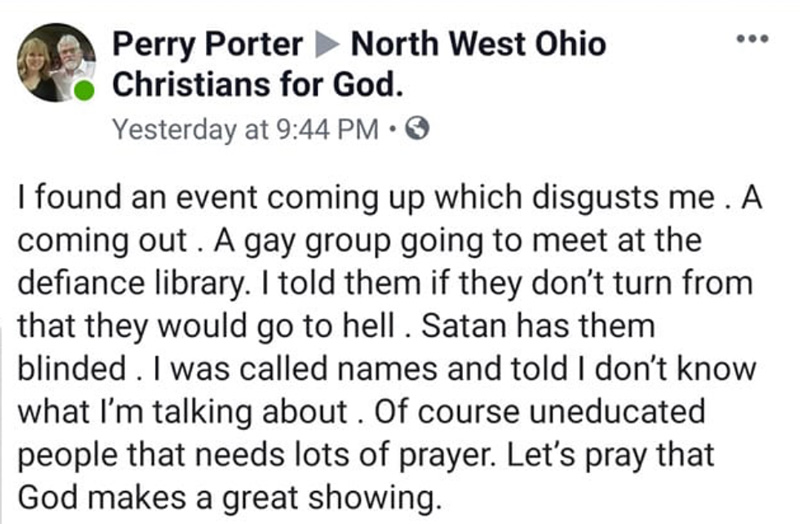 (Porter is the administrator of the page, as is Wendell Blackburn, pastor of True Believers Fellowship in Holgate. I was unable to find a church listing for Pastor Porter.)

According to Porter’s “loving” post, Calvin disgusts him. Porter, in other comments, presents himself as an I-love-LGBTQ-people-enough-to-tell-them-the-truth kind of Christian:

I hope you guys think I hate gay people cause I don’t. I pray for gay people. God said it’s unnatural for a man to lay [sic] with man and woman with woman. God is love. But he’s also a God if [sic] Wrath.

Countless such “lovers” have frequented this website over the years. As their comments have shown, their “love” is anything but. Bigots and haters, the lot of them, scurry around the Internet looking for people who live in ways that “offend” them or who believe things they disagree with. So it is with Porter. He doesn’t know Cory Calvin, but that doesn’t matter. He’s G-A-Y, end of discussion. For Porter, LGBTQ people are disgusting.

Evidently, Porter sent Calvin some sort of message informing him that he is headed for HELL unless he stops his evil gay ways. Porter’s words from the Evangelical God were ignored. Should Porter be surprised that his attack was disregarded? Of course not. He knew beforehand that he would be told to shove his “loving” words where the sun doesn’t shine. This is all about Porter taking a stand for his peculiar version of Jesus, not about “reaching” Calvin. Calvin seems happy and satisfied presently, so why would he ever want to embrace the oppressive, anti-human beliefs and practices of Pastor Porter?

Porter believes Calvin and his supporters are “uneducated.” Uneducated about what, exactly? Porter isn’t preaching anything that LGBTQ people haven’t heard countless times before. Fear and ignorance are what Porter is trying to sell, and fortunately, some local Christians ain’t buying. Several people challenged Porter, and here’s how he responded:

I don’t know if you know this, but I am a pastor. And I’ve been called names, Ridiculed because of my beliefs. the Bible says to hate the sin not the sinner and nowhere in this place have I said I hate anybody. I’m just trying to put out the word that God hates gay lifestyle. he says it’s an abomination to him I’m teaching the word obviously. maybe I love those people more than their so-called friends because their friends seem to think well go ahead it’s OK do your own thing. you might as well tell them to go to hell. I judge no one. Every time people hear something from a Christian we are judging. God judged Sodom and Gomorrah when there were people where men wanted to be with men and the women wanted to be with women. and as the story goes when the two angels came to Lot’s house the men were trying to beat down the door and said send out those men so we can know them will know them means the same thing as when Joseph had not known Mary in an intimate way until after Jesus was born.

Porter’s bigotry and hatred are nothing new in rural northwest Ohio. Right-wing religious beliefs and politics rule the roost. For many local Evangelicals and conservative Catholics, Making America Great Again means pushing LGBTQ people back into their respective closets where they belong. “How dare these queers/faggots/homos/sodmites show their faces in public, expect to be treated with respect, and have the same civil rights as white heterosexual Christians!” many locals believe. Oh, most of them will never utter such words publicly, but in the privacy of their homes, clubs, and houses of worship, their anti-LGBTQ views are on display for all to see. Pastor Porter, zealot that he is, just said out loud what many local followers of the heterosexual Jesus believe.

As I read the various comments, I noticed something: it was primarily older people who were anti-LGBTQ. Younger to middle-aged adults were far more likely to support Cory Calvin and other LGBTQ people. The hope for a better, kinder tomorrow lies in the natural death of Porter and his ilk. While it is possible for Baby Boomers and the Great Generation to change their minds about human sexuality — I know I did — most of them will go to their graves holding on to anti-human beliefs taught to them by their parents. Once these generations are slowly culled from the human herd, younger, more inclusive people will have greater opportunities to truly Make America Great Again. My six children and twelve, soon to be thirteen, grandchildren have a golden opportunity to bring fundamental changes to our culture; changes that will lead to acceptance of people for who and what they are — no strings attached. That is, if they survive the Hell of global warming that’s being unleashed upon them due to the ignorance and inaction of older generations. That’s a subject best left for another day.