And our society cheers us on in the gluttonous satisfaction of lust. Sexual immorality is repackaged as self-expression, liberation, and sexual enlightenment. Pornography is “normal,” and holiness is old-fashioned or even legalistic. Unfortunately, as prevalent as this poison is, pornography still isn’t talked about much in many of our churches [no, but it sure is watched].

John Piper, chancellor of Bethlehem College & Seminary, former pastor of Bethlehem Baptist Church, and the father of Christian hedonism, had this to say at the 2015 Desiring God Conference for Pastors:

“Look around in your life, in your church. How many Christians do you see bent with all their powers to know God more and more — more truly, more clearly, more sweetly? Or, rather, do you see thousands fighting graduate school sins with a grammar school knowledge of God?”

“You can read theology 10 hours a day for 40 years and not know God as beautiful and all-satisfying — as the highest treasure of your life. Who cares about knowing God the way the devil knows God? He hates everybody. His knowledge of God helps him hate people.”

No commentary from me. The headline is what came to my mind as I read the news story about Piper’s sermon. I know . . . so depraved. 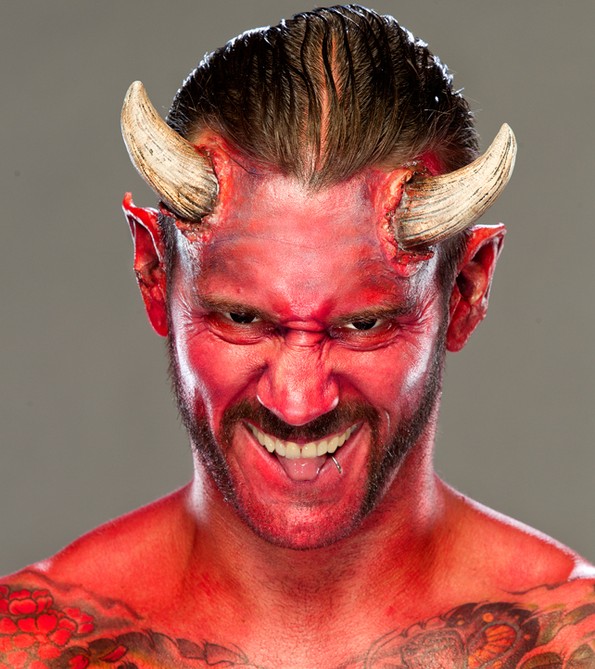 The supernatural monster who orchestrates the kidnapping, enslaving, and thousand-fold drugging, selling, raping, and killing of girls around the globe, is the same one who has masterminded the murderous cultural delusion — from the highest court to the lowest porn-flick — that the practice of sodomy is delightful, not deadly. John Piper, August 3, 2015

Charismatic Calvinist and Christian hedonist John Piper recently said Satan, a fictional being from the Christian Bible, is out to deceive and destroy the masses. But praise be to Jesus, we have John Piper, former pastor of Bethlehem Baptist Church, watching out for us and ever ready to let us know what this fictional Satan is up to.

Like many fundamentalists, Piper is enraged over the recent U.S Supreme Court decision legalizing same-sex marriage. What this decision has done is flush out the homophobes and bigots. Unable to contain their outrage, preachers such as Piper expose for all the world to see the hate that lies underneath their theological beliefs:

What is truly belligerent is the promotion of shameful acts as beautiful acts. Belligerent is the right word, because the Bible says that you should “abstain from the passions of the flesh, which wage war against your soul” (1 Peter 2:11). So those who encourage the indulgence of these passions (whatever they are) are making war on souls — they are literally belligerent.

The word sodomy has two advantages: it refers to the act of same-sex copulation, not same-sex orientation; and it still carries the stigma of shamefulness. Those who love people with same-sex attraction should want to preserve the stigma of shameful practices which destroy them — just as we should try to preserve the stigma of stealing and perjury and kidnapping, and fornication, and adultery. It is a gracious thing when a culture puts signs in front of destructive behaviors that read: Don’t go there; it is shameful.

…Lie: “. . . the practice of sodomy is delightful, not deadly.” The second word in this sentence that may be twisted is “practice.” When the Bible links “men who practice homosexuality” with “thieves,” and says that neither will inherit the kingdom of God (1 Corinthians 6:9–10), it is important to note two crucial things.

…Lie: “. . . the practice of sodomy is delightful, not deadly.” The third word in this sentence that may be twisted is “deadly.” I am not referring to AIDS or to hate-crimes against people with same-sex attraction. I hate hate-crimes, and I would love to see a cure for AIDS. I am not talking about the painful fallout of sodomy in this world — as real as that is (Romans 1:27).

I am talking about “the second death.” All unforgiven and unforsaken sin is deadly in this sense. It leads to the second death. “As for the cowardly, the faithless, the detestable, as for murderers, the sexually immoral, sorcerers, idolaters, and all liars, their portion will be in the lake that burns with fire and sulfur, which is the second death” (Revelation 21:8)…

While Piper would like to be thought of as a man who desires to love homosexuals all the way to Jesus, his insistence on using the word sodomy reveals what he really thinks about homosexuals. He knows this word  is patently offensive, yet he uses it anyway. How then is John Piper any different from the Phelps clan and Westboro Baptist Church in Topeka, Kansas? Just because Piper doesn’t stand of a street corner with a sign that says God Hates Fags doesn’t mean he disagrees with the sentiment.

Piper, like the Phelps clan and Al Mohler, is a Calvinist. The Calvinist God has the world divided into two categories, elect and non-elect, saved and lost. Since Romans 1 intimates that homosexual behavior is a sign of a reprobate mind, why not just come out and say God Hates Fags? Instead, Piper pretends to have love for the sodomites’ souls, deeply desiring to see them come to Jesus:

…In other words, not all practice of sin excludes from the kingdom of God. “All sins will be forgiven the children of man” (Mark 3:28). The sins that exclude from heaven are the sins we keep on pursuing without regarding them as God-dishonoring, and without seeking forgiveness through Jesus, and without making war on them as the enemies of our souls….

…For all those who trust in Christ, Satan is disarmed (Colossians 2:15), because the only thing that condemns us in God’s court is unforgiven sin. And in Christ, sins are forgiven (Acts 10:43). Satan’s accusations against Christians come to nothing. “Who shall bring any charge against God’s elect?” (Romans 8:33).

Therefore, we have the happiest and most horrible news in the world. In Christ there is light and freedom and life. Outside there is darkness and bondage and death. Failure to name the beauty of the light and the dreadfulness of the darkness is an abdication of truth and love…

According to Piper, there will be no homosexuals in heaven. Since our eternal destiny is predestined by God and no homosexual shall inherit the kingdom of God, doesn’t this mean God predetermined that the homosexual would have same-sex attraction?

Here’s what I think. John Piper is a 69-year-old man who can’t wrap his fundamentalist mind around two men loving each other and desiring to have sex. Like many men of his generation, the very thought of homosexual sex repulses him, and since it does this means God also must be repulsed by it. The Bible gives Piper cover for hating what he can not or will not understand.

Like others of his ilk, Piper thinks “sodomy” is akin to “kidnapping, enslaving, and thousand-fold drugging, selling, raping, and killing of girls.” Here’s an educated man who can’t qualitatively tell the difference between two people of the same-sex loving each other and enslaving and raping girls. I am at a loss as to how to respond to such stupidity.