Does the Nazareth Inscription Prove Jesus Resurrected From the Dead? 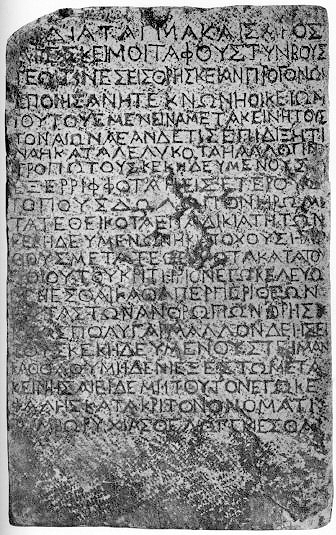 According to the latest bit of nonsense posted on the Answers in Genesis (AIG) website, the following decree from an unnamed Caesar PROVES Jesus resurrected from the dead:

It is my decision [concerning] graves and tombs—whoever has made them for the religious observances of parents, or children, or household members—that these remain undisturbed forever. But if anyone legally charges that another person has destroyed, or has in any manner extracted those who have been buried, or has moved with wicked intent those who have been buried to other places, committing a crime against them, or has moved sepulcher-sealing stones, against such a person, I order that a judicial tribunal be created, just as [is done] concerning the gods in human religious observances, even more so will it be obligatory to treat with honor those who have been entombed. You are absolutely not to allow anyone to move [those who have been entombed]. But if [someone does], I wish that [violator] to suffer capital punishment under the title of tomb-breaker.

Scratching your head? Me too. I see no evidence that remotely suggests that Jesus resurrected from the dead. The AIG article was written by Henry B. Smith Jr. Smith received his training at Trinity Seminary and Westminster Theological Seminary and is currently the director of development for the Associates for Biblical Research. Here’s what Smith had to say:

The Nazareth Inscription is a powerful piece of extrabiblical evidence that Christ’s Resurrection was already being proclaimed shortly after He was raised.
….
This “Decree of Caesar” is known as an imperial rescript, having the force of law. Rescripts frequently dealt with unusual legal, religious, or political issues arising in a specific region. The text fits both the style and structure of other rescripts of Claudius.

Matthew records one of the first responses to reports of Jesus’ Resurrection. The Jewish authorities invented a lie that the disciples had stolen the body (Matthew 28:13). Their goal was to spread an alternative story explaining why the body was missing and the tomb was empty. The Nazareth Inscription is very likely the Roman response to that very same problem.
….
The Nazareth Inscription forces skeptics to deal more deeply with the two major competing views of events: believing in the Resurrection of Christ or believing that His disciples stole His body from the tomb to perpetrate a great religious fraud. The account of Christ’s Resurrection was first circulated by the Apostles themselves, according to Scripture, and it was not a later invention by Christians of the post-apostolic period. The inscription is excellent evidence confirming this truth, and it brings to mind Paul’s statement, “If Christ is not risen . . . your faith is also empty” (1 Corinthians 15:14).

According to historian Richard Carrier:

An excellent summary of the history and nature of this inscription in English, complete with a list of all other work on it up to that time, is F. de Zulueta’s article “Violation of Sepulture in Palestine at the Beginning of the Christian Era,” Journal of Roman Studies 22 (1932), pp. 184-97, and this relies heavily on the most decisive research and commentary on the stone, available only in the French of F. Cumont’s “Un Rescrit Impérial sur la Violation de Sépulture,” Revue Historique (Jan-Apr. 1930), pp. 241-66. I refer to these in what follows:

The Date: Zulueta concludes that the most extreme possible dates of the inscription, based on the style of lettering, are 50 B.C. to A.D. 50. He thinks it most likely in the middle, thus around the turn of the era, long before the death of Jesus. Cumont agrees, believing the edict to be of Augustus, although it may even be of Julius Caesar from the time of the Alexandrine War. Both arrive at this conclusion because the edict states simply “Caesar” and does not qualify with the specific successor’s name, as is almost always the case. Thus, the claim that it dates to the reign of Tiberius or Claudius is not only unsupported by any evidence, but is all but contradicted by the evidence. A Claudian date was conjectured by Dr. De Sanctis only because Galilee (where Nazareth is located) was not under the empire until the time of Claudius, but this is not very decisive for two reasons: first, allied states often voluntarily appealed to Julius Caesar or Augustus for a ruling in some issue (especially in time of war, when the power of Rome was the only effective law enforcer around); second, it is very doubtful that the inscription is actually from Nazareth.

The Location: the inscription’s origin is not clearly known. It was found in the collection of a man named Fröhner when it was donated to the Paris National Library in 1925. His notes on the item state nothing more than “Dalle de marbre envoyée de Nazareth en 1878.” That’s it. This translates as “Slab of marble sent from Nazareth in 1878.” Zulueta observes that this does not say “found” in Nazareth (découverte à), but sent from there, and it has been shown that Fröhner’s “notes on the provenance of his treasures are very exact,” thus he can be counted on to have chosen his words carefully.

In the late 19th century there were only two major market centers for all antiquities recovered in Palestine: Jerusalem and Nazareth. Thus, Zulueta makes the plausible conjecture that the slab was recovered either in Samaria or Decapolis and either purchased in or shipped out of the nearest possible place, which would be Nazareth. Indeed, Zulueta also observes that the text uses the plural form “gods” which would have been offensive to Jews, making the most likely origin the Hellenized district of Decapolis. In line with this is the constant emphasis in the decree of the cult of the dead, even as being on par with the religious worship of gods, a choice of words and phrases that would not have been much approved by Jews, no matter how much it might have been true, but would have made perfect sense in a community of Greeks. On the other hand, there is an historical event in Samaria that could have served as a cause of this decree: in 8 A.D. some Samaritans entered the Temple after midnight and tossed around corpses they had presumably illegally exumed elsewhere, possibly provoking the recall of the governor Coponius.Even so, Zulueta leans in favor of Decapolis, since this edict seems to be unconnected with a Temple violation, and to be aimed more at Greeks than Jews.

To this it can be added that a tiny village of no more than a few hundred inhabitants, none of whom are even remotely likely to have been literate (or even speakers of Greek), is not where such an inscription would be set up. Jerusalem would have been a candidate, but not Nazareth, where the inscription would be useless and a pointless expense. Though the poor quality of the inscription demonstrates that it was put up by a private person, who either was or who hired a scribe who was somewhat incompetent in Greek (but who apparently knew Latin), even this sort of person would not go to all this trouble and expense to put up a slab like this where no one would read it–though even if he did, its location would have nothing to do with the interests of the emperor or governor.[9] All of the above evidence decides fairly strongly against a Nazarene provenance, and in favor of an Augustan date.

The Nazareth Inscription provides no evidence for Christianity or its claim of an empty tomb. It contains no new or unusual laws regarding graverobbing, the decree itself is not unique, and it has no references or direct links to Christianity of any kind. Moreover, it’s date is most likely pre-Christian, its origin is not likely to be Nazareth, and its contents are not explainable even as a muddled imperial reaction to the theft of Jesus’ body. To tie this to Christianity requires piling dozens of conjectures onto scores of speculations, and the rejection of a good supply of contrary indications and evidence, and none of this is either necessary or reasonable.

Well…there ya go readers. Are you now convinced that Jesus resurrected from the dead?  Me neither.

Smith’s little ditty is just another example of how desperate Evangelicals are to “prove” their faith. As the forces of secularism and science continue to weaken Christianity’s foundation, Evangelicals — fearing the collapse of the faith once delivered to the saints — seek the smallest bit “proof” that can be used to prop up their shack.  While such bits of “proof” might wow the intellectual giants who frequent the AIG website, those outside of  Evangelicalism just shake their head and laugh.

Now when they were going, behold, some of the watch came into the city, and shewed unto the chief priests all the things that were done. And when they were assembled with the elders, and had taken counsel, they gave large money unto the soldiers, Saying, Say ye, His disciples came by night, and stole him away while we slept. And if this come to the governor’s ears, we will persuade him, and secure you.So they took the money, and did as they were taught: and this saying is commonly reported among the Jews until this day.

Smith’s presuppositions force him to accept Matthew 28:11-15 as historical fact. Since the Bible is the inspired, inerrant, infallible Word of God, Smith is certain that soldiers started a rumor about Jesus’ disciples stealing his body. Smith has no evidence for this claim. Like all Evangelicals, Smith’s arguments start and end with “. . . the B-I-B-L-E says . . .”