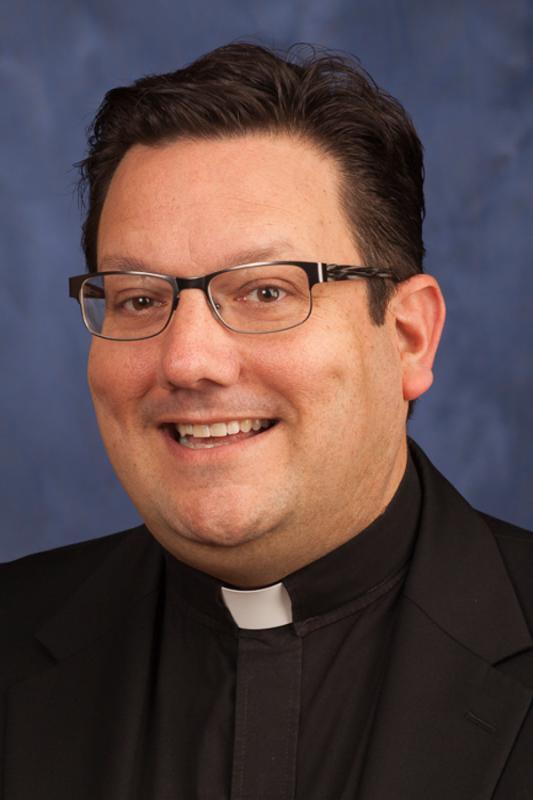 James Csaszar, parish priest at Church of the Resurrection in New Albany, Ohio and former priest at St. Rose of Lima Parish in New Lexington, Ohio, jumped from a Chicago hotel Wednesday, plunging to his death. Csaszar was under investigation for  “questionable communications with a minor and possible misuse of church funds.”

A Catholic diocese in Ohio says a parish priest under investigation for “questionable” communications with a minor and possible misuse of church funds killed himself.

The Catholic Diocese of Columbus said in a statement Thursday that the Rev. James Csaszar killed himself Wednesday in Chicago. Csaszar was pastor of Church of the Resurrection in the Columbus suburb of New Albany.

The diocese’s statement says Csaszar was placed on administrative leave last month when officials learned of “excessive and questionable” text and phone communications with a minor and possible misuse of funds while pastor at St. Rose of Lima Parish in New Lexington.

The Ohio Bureau of Criminal Investigation began looking into Csaszar after the diocese learned of the allegations and contacted police in New Lexington, roughly 55 miles (89 kilometers) southeast of Columbus.

A man who killed himself by jumping off a downtown Chicago hotel on Wednesday was a Catholic priest under investigation in Ohio in connection with “questionable” communications with a minor and misuse of church funds, according to authorities.

A man identified by authorities as James Csaszar was a priest who was pastor of Church of the Resurrection in the Columbus suburb of New Albany, according to a statement from the Catholic Diocese of Columbus. Csaszar, 44, died after suffering multiple injuries after jumping from 221 N. Columbus Drive — the Aqua Hotel — and his death was a suicide, the Cook County medical examiner’s office determined Thursday following an autopsy.

It is with deep shock and sadness that we have learned of the death of Father James Csaszar, pastor of the Church of the Resurrection in New Albany, who took his own life yesterday in Chicago.

On November 7, Father Csaszar was placed on an administrative leave by the Diocese of Columbus after diocesan officials were made aware of excessive and questionable text and telephone communications with a minor and potential misuse of church funds while serving as pastor of St. Rose Parish, New Lexington. Following a diocesan review of the matter, the New Lexington Police were contacted and all information was turned over to them and the Ohio Bureau of Criminal Investigation for their review; an investigation was being conducted at the time of Father Csaszar’s death.

We are reminded throughout sacred scripture that God our Father is loving, merciful, compassionate and forgiving. We also know that in his years of priestly ministry Fr. Csaszar did many good things for the people that he served in his parish assignments. And so we ask that everyone pray for Father Csaszar, his family, friends, and parishioners during this most difficult time.

Father James Csaszar, who was a member of the Church of the Resurrection in New Albany, took his life on December 20, 2017. He was 44-years old.

Father Csaszar was under investigation at the time by the New Lexington, Ohio Police Department regarding stolen funds at the St. Rose Parish in New Lexington as well as inappropriate conversations with a minor child.

According to a statement released Wednesday from the Diocese, the investigation into Father Csaszar is concluded and the following was substantiated:

*Inappropriate communication had taken place between the minor child over a period of time.

*The minor stated that while texting conversations with Father Csaszar became “weird” and at times minor felt bullied and blackmailed by him, no inappropriate physical contact had taken place.

*Father Csaszar stated in one text messages that he was in possession of a nude photo of a minor.

According to the letter sent to members of the Church of the Resurrection, Father Csaszar was approached by Reverend Frederick Campbell, Bishop of Columbus about the allegations regarding the minor child.

“He admitted wrongdoing…including possession of a nude photo of a minor that was sent to him by an allegedly unknown person or persons. Father Csazar never reported the photo to the minor’s parents, law enforcement or the Diocese,” according to the Bishop.

After that conversation, the church says they placed Father Csaszar on leave of absence until the police investigation was completed.

The Diocese says it fully cooperated with police.

The investigation also found “financial irregularities” at the Perry County Consortium of the Parishes. It was never determined how much money was missing, according to police.