Christians Say the Darnedest Things: Democrat Pete Buttigieg is NOT a Christian 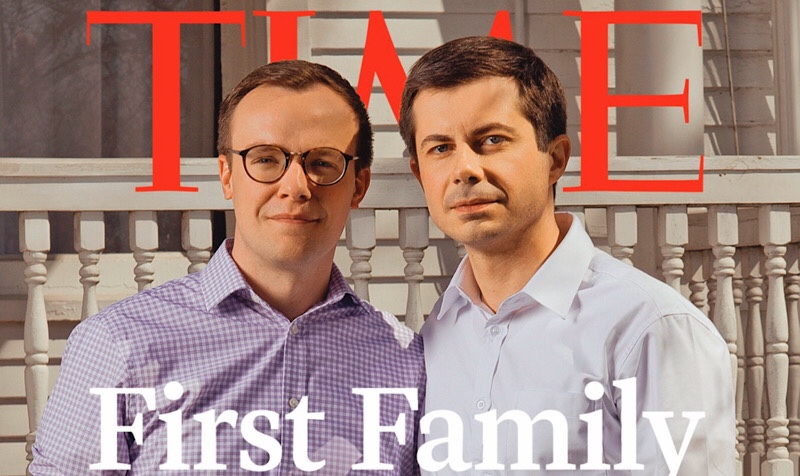 Twenty-plus Democrat presidential aspirants have been reduced to basically five credible candidates—37-year-old Millennial and South Bend Mayor Pete Buttigieg is one of them, who could get the nomination or be on the ticket as vice president. If the aging Biden wins the nomination and presidency, then one day “passes,” we’d have our first openly practicing homosexual, accompanied by his gay “spouse” Chasten, as president of the United States. Time magazine already put them on the cover as our potential “First Family” (May 2019).

Interviewed for USA Today in an article titled “Mayor Pete Buttigieg’s Countercultural Approach to Christianity is What America Needs Now,” the “devoted Christian” takes aim at our president for hypocrisy; attacks the “religious right”; advocates our Christian faith going in a “progressive direction” and wants LGBTQ proponents to “beckon people onto the right side of history.”

While engaging in conversations regarding Mr. Buttigieg’s lifestyle and other “gay Christians,” we’ll need to “winsomely and skillfully “speak the truth in love” (Eph. 4:15). Remaining silent conveys support for what the Bible clearly reveals as serious sin before our Holy God. He may be articulate and attractive but the liberal Episcopalian Mayor Pete advances heretical positions to the masses.

Today people can self-identify as anything they want and society airbrushes away what in our heart of hearts we know to be wrong in order to appear non-judgmental, welcoming and politically correct. Majoring on people’s “brokenness” and minimizing their sinfulness, we’re viewing this conduct as “not so big a deal” to skirt accusations of “bigotry, hate speech and intolerance.”

Whether it’s Mr. Buttigieg or simply people we know, a person claiming to be an authentic Christian and a practicing homosexual is, according to Scripture, a counterfeit convert.

Scripture throughout forbids sexual involvement in seven areas: with parents, children, another’s spouse, siblings, same sex, animals and dead people. There is not one verse in all the Bible that affirms the practice of homosexuality.

Here’s the deal: Whether a high-profile figure like Pete Buttigieg or an ordinary person, God offers hope, forgiveness and freedom to everyone who repents and believes the transformative and liberating message of the gospel. As His ambassadors we must winsomely [ Greek for smiling really big while you tell LGBTQ people they are headed straight for Hell unless they repent and become heterosexual Christians] and courageously communicate hope through Jesus Christ as darkness increases in our culture today.

Larry Tomczak: The ‘Summer of Love’ is to Blame for Legalization of Same-Sex Marriage 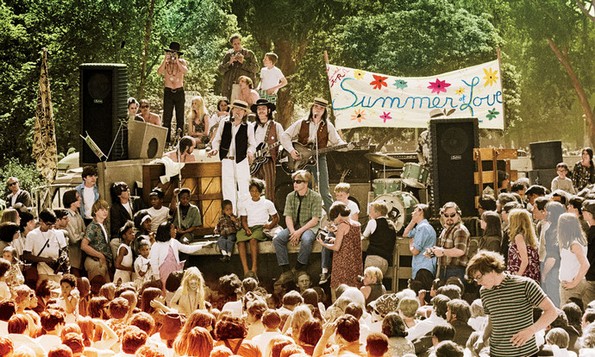 In recent years, it has become fashionable to blame Baby Boomers, those born between 1946 and 1964, for every perceived American social and moral ill.  According to Larry Tomczak, the blame for the legalization of same-sex marriage belongs to the ‘Summer of Love’ generation. In a post titled 6 Lies from the Pit of Hell, Tomczak traces the moral decline of the United States from the drug using, free sex days of the 1960’s to the recent U.S. Supreme decision legalizing same-sex marriage. Tomczak, a one time associate of C.J. Mahaney and Sovereign Grace Ministries, writes:

…Beginning with the shocking assassination of President Kennedy in the ’60s, a flickering of Camelot–inspired hope was extinguished. Prayer and Bible reading were banned from our public schools and the “God is dead” pronouncement of 1966 fostered an era of skepticism and cynicism bleeding through our land.

It’s not like there was one defining event that triggered our current confusion, but when the turbulent 24 months of ’67 and ’68 erupted on the scene, clues emerge. Cultural analysts call this a “tipping point.”

The year 1967 was dubbed, “Summer of Love.” Scores of us naïve youth fell in line behind pied piper Scott McKenzie as we grabbed our knucklehead buddies and love beads and swayed with the wind all the way to San Francisco. Do you remember the song? “Are you going to San Francisco? You’re going to meet some gentle people there. … ” It almost moves you to put some flowers in your hair!

Millions of us idealistic young people and our counterpart “hippies” believed we were ushering in the long–awaited “Age of Aquarius” with all our peace symbols, free love and free speech. American psychologist Timothy Leary, took LSD and told us, “Turn on, tune in and drop out.” Seduced by our foolishness we declared, “Never trust anyone over 30!” while Pete Townshend and the Who exclaimed, “Hope I die before I get old!” (He’s now 70 and still cashing in on his musical career!). Soon thereafter, hundreds of thousands were sloshing in the mud at the Woodstock Festival—can you believe it’s been almost 50 years?

Jim Morrison, lead singer of the Doors, was my idol as I was a drummer in The Lost Souls. His moronic philosophy: “I’m interested in anything about revolt, disorder, chaos, especially activities that appear to have no meaning. It seems to me to be the road to freedom! ”

Slowly but surely, years of “freedom” took its toll. Time magazine called 1968, “A knife blade that severed past from the future.”

Casting off restraints to protest and launch the Gay, Women’s and Black Power Movements, the Sexual Revolution and the Drug Counterculture, we soon morphed into meltdown. The Civil Rights Movement was one positive initiative.

Divorce laws were liberalized (today 80% of divorces are “no fault,” translating into 45 million divorces since the end of the ’60s!) Sexual standards evaporated and resulted in rampant pornography, skyrocketing out-of-wedlock births, one in every four teens strapped with a sexually transmitted disease, drug abuse, school violence, teen suicide, spousal and child abuse, violent crime, prison overpopulation, sexual anarchy, gender confusion, glamorizing and promotion of homosexuality, lesbianism, bisexuality, and transgenderism with gender reassignment surgeries. All of this proliferating since the now infamous “Summer of Love” soured to a stench…

Multitudes of people need a reality check to bring them out of a sentimental yet distorted remembrance of this period. We must remove the romantic recollections of this turbulent ’60s era. In contrast to PBS nostalgic specials highlighting the supposed peaceful and musical ’60s time period, we need to come down to earth and recognize the devastation that resulted. This was not a time that was all groovy, lovey, peaceful with flowing-hair, girls in granny dresses twirling in the park amid syrupy-faced guys with tambourines and doves flying around their heads as they harmonized in childlike unity, singing “Kum ba ya” and playing flutes while innocently getting high. This is a fantasy that needs to be shattered immediately…

Like many of his ilk, Tomszak pines for a return to the 1950’s; a time when Negroes knew their place, abortion and birth control was illegal, sodomites were still in the back of the closet, women stayed at home, divorce was rare, and Christianity ruled the land, In Tomczak’s mind, everything began to go downhill when God was thrown out of the public schools and hippies spent all their time smoking dope and screwing.

Tomczak mentions six lies, lies he says are from the pit of hell, that are now accepted by many Americans:

In typical Evangelical fashion, Tomczak shows he has no understanding of what those outside of his cult believe. He also assumes that the only  legitimate standard of morality is his fundamentalist interpretation of the Christian Bible. Using Tomczak’s infallible moral standard,  premarital, extramarital, and homosexual sex become abnormal, immoral, and unhealthy. An unwillingness to believe life begins at conception means that you believe human life has no value and should not be legally protected.

I don’t know many people who think that drug use is a “great recreational sport” or that divorce “offers an easy escape from marriage.” Do some people treat drug use as a recreational sport? Sure, but I have yet to see anyone suggesting we start the ADUL, the American Drug Use League. Long before the ‘summer of love’, humans were using drugs, legal and illegal, to alter their mood or emotional state. 2,000 years ago, Jesus turned water into wine. Unless Tomczak thinks Jesus turned the water into Welch’s grape juice, the wine provided by Jesus at the Wedding at Cana, was a mood altering drug.

And when it comes to divorce, what is really behind Tomczak’s objection to an “easy escape from marriage?” Is it because divorce is forbidden by the Bible or is the real reason women are now able to free themselves from abusive men? Perhaps the real issue is uppity women who dare to think they should be treated equally.  Kick them shoes off, clean the house, cook supper, and have lots of little Christians, ladies! That’s your calling. Leave the hard work to men like Larry Tomczak.

The real reason men like Tomczak rage against liberalism and secularism is because they no longer have a preferred seat at the cultural table. They are upset that progress has moved the United States beyond the zenith of Evangelicalism, the 1950’s, when In (Christian) God we Trust was added to our paper money and  allegiance to the Christian God was added to the Pledge of Allegiance. More and more Americans are indifferent or hostile towards Christianity and this has Evangelicals looking for someone to blame. For Tomczak, the blame rests squarely on the shoulders of long-haired tie-dyed wearing hippies.

Three things are essential for us to see societal transformation.

1. We must recognize the gravity of the situation.

2. We must cry out to God for wisdom and a sense of urgency.

3. We must pray and proclaim the gospel and truth at every opportunity as we engage outsiders in a winsome way.

This presupposes that we know the issues, the truth, and have the courage and confidence to speak out. “Walk in wisdom toward those who are outside, wisely using the opportunity. Let your speech always be with grace, seasoned with salt, that you may know how you should answer everyone” (Col. 4:5-6).

Seeing the gathering storm clouds on the horizon, I recently pulled apart with my wife to a secluded cabin in the mountains of Tennessee. My assignment from God was to write a book that would be a tool to help shape informed influencers to make a difference in today’s confused culture. I pinpointed the 30 “hot button” issues of today.

God gave me a practical plan: Challenge people to take 30 days and invest 15 minutes a day in a 3 step process to develop a biblical worldview and confidence in addressing our country’s controversial issues: 1. Review a video—3 min. 2. Read an article—10 min. 3. Reflect and pray—2 min. The title of the book is Bullseye and it’ll help us “hit the mark” in sharing the gospel and biblical truth to dispel deception and foster spiritual awakening.

I invite your prayer support as we finalize this project. May this be one of many divine strategies given by God at this tipping point in America’s history.

“God” gave Tomczak a practical plan that is sure to “dispel deception and foster spiritual awakening.” For 30 days, 15 minutes a day, Tomczak wants like-minded Evangelicals to:

Oh, and he is writing a book he wants everyone to buy.  There’s a-lw-a-y-s a money angle.

On his blog, Tomczak calls his plan the Bullseye Challenge (link no longer active). According to Dr. Michael Brown, a former “heroin-shooting, LSD-using Jewish rock drummer” and the “world’s foremost Messianic Jewish apologist”, Tomczak’s plan will turn Game of Thrones watching, NASCAR loving Republicans into a “confident communicator and change agent in today’s confusing culture.” So far, Tomczak’s blog post has ONE Facebook like and ZERO retweets on Twitter.

Want to know more about the Bullseye Challenge?  Check out Tomczak’s video: