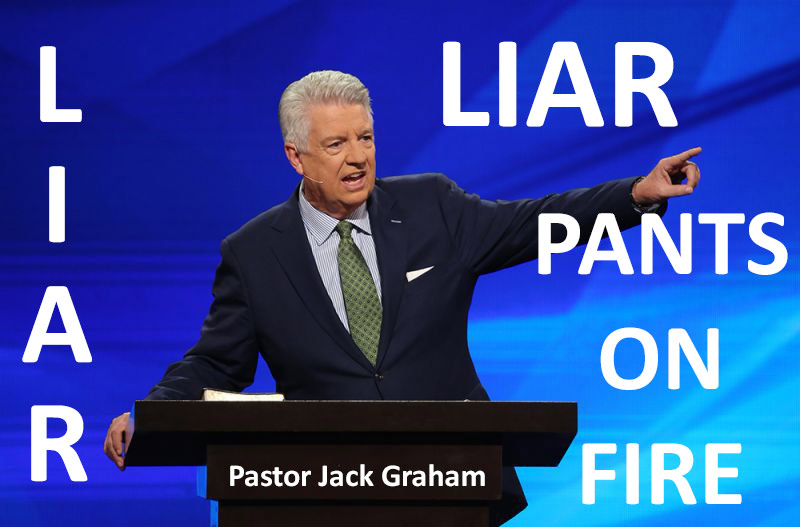 What follows is an excerpt from a sermon by Trump-supporting Fundamentalist Southern Baptist megachurch pastor Jack Graham. Graham deliberately lies about the history and nature of socialism. In particular, he attempts to paint modern Democratic Socialism with the brush of Soviet-style socialism/communism. Evidently, Graham views getting Trump re-elected more important than accurately representing beliefs and systems he opposes. Democrats should expect this tactic to be repeated time and again as we head toward the November 2020 general election.

Socialism is fundamentally at odds with the Christian worldview and seeks to suppress all peoples in support of the state. No one serious about their Christian faith can be serious about supporting socialism.

Some young people see capitalism, corporate America, as being greedy, without compassion, without concern, and we have to admit that there is a lot of greed in people’s lives. But here’s the thing, young people under 30 have not seen in their lifetime the devastating effects of Soviet-style repression and oppression through socialism and its big bad brother communism.

Socialism is totally secular and is predicated on atheism. Our faith in Jesus Christ is built on the word of God, the revelation of God, that God exists, that we believe in the resurrection of Christ, and with that faith comes freedom to live an abundant life with liberty, but Karl Marx, the father of scientific socialism, considered religion of all kinds, and specifically Christianity, as the opiate of the masses. You’re on drugs if you believe in God.

It would be a catastrophic miscalculation to think that socialist hostility towards religion, and Christianity specifically, has changed in any way since the days of Karl Marx. Socialist countries today are secular in nature, often repressing and oppressing people of faith, all faiths, and particularly are determined to root out Christianity.

Name me one socialist-style country, communist or otherwise, that is open to faith without oppression and suppression of that faith. It is at the very root of this thing called socialism.

In America, socialism has produced a welfare state of sorts, and that will not work for the future of America. It’s not working now.

A Day of Public Indecency: Exposing the National Day of Prayer

Thursday, May 7, 2015 is the annual National Day of Prayer.  On April 17, 1952, “President Harry S. Truman signed a bill proclaiming a National Day of Prayer (NDP) must be declared by each subsequent president at an appropriate date of his choice.” In 1988, the law was amended, setting the first Thursday in May as date for the NDP. While the NDP is supposed to be a day when people of all faiths come together to pray, it has been co-opted by Evangelicals. While certainly people of various faiths will gather to pray on Thursday, it will be Evangelicals and conservative Catholics that get all the media attention. Instead of following the command of Jesus to pray in secret, Evangelicals will gather at county courthouses and government buildings and metaphorically expose their 13.316 inch prayer penis for everyone to see. On this day, Evangelicals want everyone to know that the United States is a Christian nation, that the one true God is the Christian God, and that they are God’s chosen people.

The National Day of Prayer Task Force is an Evangelical organization:

…whose purpose is to encourage participation on the National Day of Prayer. It exists to communicate with every individual the need for personal repentance and prayer, to create appropriate materials, and to mobilize the Christian community to intercede for America’s leaders and its families. The Task Force represents a Judeo Christian expression of the national observance, based on our understanding that this country was birthed in prayer and in reverence for the God of the Bible.

Shirley Dobson, wife of Christian fundamentalist James Dobson, is the chairwoman of the Task Force.  In a recent letter to NDP volunteers, Dobson stated:

“We are contending with threats from those both here at home and abroad who aim to do us harm, and immoral practices and unsound principles run rampant throughout the culture. With this in mind, there’s an especially urgent need for God’s people to ask for His guidance for the days ahead.”

For those not schooled in the fine art of Evangelispeak®, immoral practices=abortion, homosexuality, sex before marriage, and same-sex marriage. Unsound principles=evolution,humanism, atheism, secularism, and socialism.

According to Dion Elmore, spokesman for the National Day of Prayer Task Force:

“This is an American thing; this is not a Christian thing. Congress solidified a tradition of the Founding Fathers, who fought for religious freedom to gather in churches and groups. We encourage Americans to get out and pray for your nation, if you are a person of faith. We realize some people aren’t, and we’re not trying to force it on them.”

Really? An American thing? What section of the Constitution or the Bill of Rights mentions the NDP as an “American thing.”  While ONE of the reasons the Founding Fathers fought the British was religious freedom, it certainly wasn’t THE issue that drove colonialists to pick up arms and rebel against Britain. In fact, in many of the original 13 states, anti-religious freedom founding documents and laws were adopted, often enshrining Christianity as the state’s official religion. The notion that the United States was founded on religious freedom is a myth, as any cursory reading of American history will show.

We come to You in the Name that is above every name—Jesus Christ our Lord and Savior. Our hearts cry out to You.

Knowing that You are a prayer-answering, faithful God—the One we trust in times like these—we ask that You renew our spirits, revive our churches, and heal our land.

We repent of our sins and ask for Your grace and power to save us. Hear our cry, oh God, and pour out Your Spirit upon us that we may walk in obedience to Your Word. We are desperate for Your tender mercies. We are broken and humbled before You. Forgive us, and in the power of Your great love, lift us up to live in Your righteousness.

We pray for our beloved nation. May we repent and return to You and be a light to the nations. And we pray for our leaders and ask that You give them wisdom and faith to follow You.

Preserve and protect us, for You are our refuge and only hope. Deliver us from all fears except to fear You, and may we courageously stand in the Truth that sets us free. We pray with expectant faith and grateful hearts.

In Jesus’ name, our Savior. Amen.

Why is it necessary for millions of Christians to utter the same words at exactly the same time? Perhaps God has a busy schedule on Thursday and can only spare one minute to hear the repetitious prayers of his chosen people. How will success be judged? How will Evangelicals know that they got through to the Almighty?  I guarantee you that there is ONE thing that every praying Evangelical wants under his prayer tree…the U.S. Supreme Court affirming that marriage is between one man and one woman.

According to Randall Murphree, editor of the American Family Association Journal:

We have become self-sufficient, depending on our own abilities. We hold aloft our trophies, proclaiming, “Look what we have earned!” We neglect the gracious Giver of all gifts. We have become self-satisfied, prideful in our meaningless, material accomplishments. We rest pampered and apathetic in the arms of affluence. We forget the One who offers true satisfaction.

We have become self-righteous, basking in the sunlight streaming through our stained glass windows. We ignore the God of whom Paul wrote, “[T]hey did not know the righteousness of God and sought to establish their own”…

…If we do not confess the sins of our critically ill culture, the illness could be terminal. Time and time again, God has judged nations by the character of His people. When His people failed to repent, their nations fell. America’s believers – preachers and plumbers, janitors and judges, editors and educators, broadcasters and brick masons – must spend time before God Almighty, confessing and repenting…

As you can see, lots of generic theological words hide the real reason for this year’s National Day of Prayer.  There will be few prayers uttered about the wars in the Middle East, global climate change, immigration, starving children, or the homeless. Little will be said  about most of the perplexing problems facing 21st century humans. None of these things matter to most Evangelicals. What does matter is outlawing abortion, criminalizing homosexuality, and banning same-sex marriage. What does matter is re-instituting government sponsored prayer in public schools, posting the Ten Commandments on classroom walls, and teaching school children the earth is 6,019 years old. What matters most of all is taking back the United States from Kenyan-born, socialist negro Barack Obama and those who are Democrats, socialists, atheists, humanists, pagans, and liberal Christians. Theocracy remains the ultimate goal and they will not rest until the Christian flag is hoisted over the White House and the U.S. Supreme Court recognizes that ,Biblical Christian law, is the law of the Land.

I wish Evangelicals would be honest and stop couching their agenda in flowery, generic, non-offensive theological terms. Forget Jack Graham’s suggested prayer and get to the point:

Dear God, Dammit, we want our country back and we want it back now. We beseech you oh Lord, please kill all the homos, transvestites, abortion doctors, Muslims, atheists, and anyone else who refuses to bow a knee to Jesus and admit that the United States is one nation under the Evangelical God.  As in days of the Old Testament, send a plague upon the heathen and kill them all, sparing the Koch Brothers, Waltons,  and all the other job creators. Enrich hell with their flesh, and may the smell of their burning flesh be a sweet Uncle Ray’s BBQ savor in your nostrils. Oh Lord, burn down every house of worhsip except those where the one true Evangelical gospel is preached. You know which one that is, right Lord? I know you kind of got confused when you wrote the Bible. As in the days of the Old Testament, send fire from heaven and burn alive all the false prophets, especially atheist false prophets. Lord, what we really want is a Disney Park country just for true red white and blue Republican Christians. Please Lord, we need your help because no one is paying attention to us. Let the world know that you are still the same bad-ass God who drowned the entire human race in a flood and that we are your oh-so-special children.