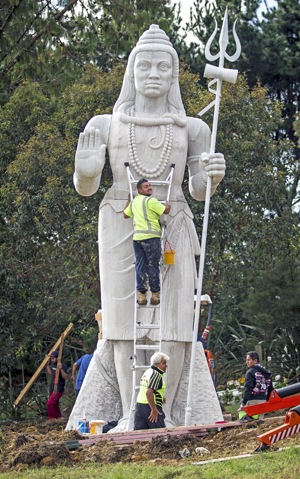 Here’s a story from New Zealand that perfectly reveals how clueless many Christians are about how their beliefs are perceived by others. I guess if you have always been the playground bully, you have no concern for the little guy. In this story, a Catholic man, who has no problem with Christian crosses, gets upset when his Hindu neighbors erects a statute of Shiva: (link no longer active)

A religious spat has broken out between two neighbours in rural Auckland after one erected a 6.4m statue of the Hindu god Shiva.

Ravin Chand told the Herald on Sunday that he installed the 30-tonne religious effigy so that he and his family could pray to it.

But neighbour Bryce Watts, a Catholic, said the marble statue was “bizarre” and “offensive”.

“Religiously and culturally it’s a bit insensitive to us and I can’t believe they’re able to do this. Part of our property looks at it and it’s part of a religion we don’t agree

“I don’t see why we should have it poked down our throats in such a big way.”

It took Chand more than a week to assemble the statue and he defended it saying it was part of Hindu culture. “It’s just that the size is a bit bigger,” he said.

Asked why he had mounted the giant deity, Chand said: “Do you need a reason to pray? I don’t think so.”…

…Chand said the correct council consent and geo-technical inspections were completed beforehand. But Watts said he was not informed about the proposed statue, and said it was “bizarre” it could be erected without any consultation with neighbouring properties.

“They’ve let it go ahead to be built without consulting us, and we’re probably the most affected here because everywhere we go on our property it’s kind of there.”

Watts said he had complained to Chand but there was little else he could do because the Auckland Council had already consented to it being built.

“I’ve been to the council and asked about it and evidently it was within their rights to do it and it doesn’t need a permit, even though it’s a 6.4m-high concrete statue.

“It’s 10m from our boundary which is within the rules where you can build a building. It’s like, ‘bad luck, if you don’t like it, it’s your problem’. I find it really hard to believe in this day and age that this can happen.”

Chand said Watts had phoned his wife – but was the only person to complain. “Everybody else who has gone past has stopped and admired it,” he said.

“[Watts] compared it with ‘me putting up a [Nazi] swastika next door to you’. I said, ‘Well if you want to put it up, feel free to put it up. Nobody can stop you from doing that, it’s your property.’

“I’m not bothered. I haven’t got time for people like that.”

Chand added there were many churches in the area, but no one complained about them…

“Religiously and culturally it’s a bit insensitive to us and I can’t believe they’re able to do this. Part of our property looks at it and it’s part of a religion we don’t agree. I don’t see why we should have it poked down our throats in such a big way.”

Funny, I’ve had that same feeling about Evangelical Christianity.

My wife and I worship nature. We bought our home and land eight years ago. When we bought it, it had two spacious old trees, a large peony patch, a flaming azalea, and a few flower bulbs. Each spring and fall we have planted trees, bushes, flowers, and bulbs. We plan to turn our yard into an Atheist Garden of Eden. Now, our neighbors may not like what we have planted. Perhaps our newly planted trees and bushes blocks their view of our house. Should we give one moment’s thought to their like or dislike? Of course not. As long as we respect property lines and conform to zoning and constructions standards, what we do is no ones business but ours. If one our neighbors wants to put up a gawdy statue of the virgin Mary that’s none of our concern, and they shouldn’t care one bit about what we do with our yard. Live and let live, right?

Now, we don’t really worship nature, but you get my point. Christianity may deeply influence the culture we live in, but once we cross our property line, we have entered the Kingdom of Hitch and our God demands we help clean the air by planting trees, bushes, and flowers. We gladly comply because our God richly blesses us with wondrous colors and beauty. While the Catholic might find beauty in a tortured man nailed to an old rugged cross, Polly and I find beauty in the ebb and flow of the natural world. Like the Christian, we can sing, Our God is an Awesome God.

Memo to Christians. Invoking Hitler or the Nazi’s is always a bad idea.

I should also note that we did take our neighbors into account when we determined what type of trees to plant. Since we spend days each fall raking up leaves from trees on properties not our own, we wanted to make sure we did not add to our neighbors workload by planting trees that would deposit leaves on their property.