Book Review: Breaking their Will by Janet Heimlich 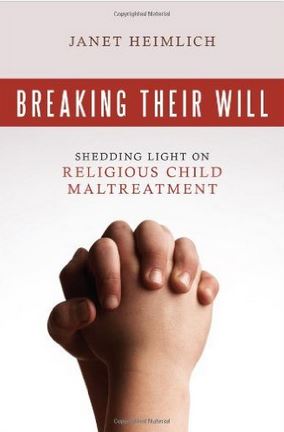 Heimlich writes that religious child maltreatment manifests itself in many ways, such as:

Breaking Their Will is divided into four parts:

Heimlich’s book is well documented and chock-full of real life stories of boys and girls who were abused. In my most recent battle with people within the Independent Fundamentalist Baptist (IFB) church movement I noticed that the testimonies of people who were abused are routinely dismissed. In most every case the abuse deniers know of people who were not abused while in the same setting as those who were abused, or they know the accused abusers personally, so they dismiss abuse claims as lies or attempts to attack and destroy the IFB movement. I subscribe to the theory that where there is smoke there is fire and the sheer number of people claiming to have been abused makes it highly in unlikely that they are all lying.

At times Breaking Their Will made me uncomfortable. The book reminded me of what I once was. It is hard to admit that my sincere literal interpretation of the Bible led me to preach and teach things that are clearly abusive. I routinely recommended child rearing books by John R. Rice, Jack Hyles, James Dobson, and Richard Fugate. While I cannot undo the past, I can advocate for and demand that religious child abuse be taken seriously.

Heimlich suggests that clergy be required to report child abuse and neglect. Here in Ohio, such a requirement is already law. However, many pastors do not consider beating a child with a rod or a belt to be abuse. The Bible teaches (requires) it and they hold to the philosophy that their parents disciplined them using corporal punishment and look how they turned out. Until there is a federal law making striking a child a crime, physical child abuse in the name of God will continue.

I observed and participated in disciplinary methods that I would today clearly consider abuse. Back then I called it Biblical discipline; Today I call it child abuse. Over the course of 25 years I reported abuse to Family Services three times. All of the reports were made after I observed or heard about abuse (all of the reports came from our bus ministry). In retrospect, I now know that what I called good bible-based, God-honoring discipline was actually religious child abuse.

Heimlich advocates extending or eliminating the statutes of limitations on sexual child abuse. She will get no argument from me. (though I do have some concern about false claims of sexual abuse being used to get back at a parent, pastor, teacher, etc.). I think it is scandalous that the Roman Catholic Church in many states hides behind statutes of limitations, refusing to even acknowledge that abuse “might” have occurred.

Heimlich encourages parents to examine the norms and behaviors of the faith-based communities of which they are a part:

For those of raised in IFB churches and Evangelical churches this list pretty well describes most of the churches of which we have been a part. In other words, tens of millions of Americans attend churches that have dangerous abusive tendencies. How can this be? Simple. When a religious text becomes the authority over every aspect of life, and its teachings implicitly obeyed, abuse is sure to follow (and we see the same thing in the Muslim faith and Orthodox Judaism).

I heartily recommend Janet Heimlich’s new book Breaking Their Will. If you want to study the connection between religion and child abuse this should be the first book you read.  Religious child abuse can be stopped IF parents and religious leaders are willing to tackle the subject head-on. Thoughtful parents need to leave the belt in their pants and relegate the rod to the trash bin of archaic, unenlightened tools of discipline. As a parent and a grandfather I have an obligation to encourage and gently instruct my children in matters of child discipline  and the propriety of religion in the lives of their children (my grandchildren). Our children know my wife and I oppose any form of hitting children and they know that we do not support children being indoctrinated in a religious faith before they are mature enough to make a decision on their own.

I hope Breaking Their Will is widely read. May it spur a mass exodus out of churches that promote and teach religious child abuse. May it also make government authorities aware of the extent of abuse that goes on in faith communities.

Who is Janet Heimlich?

A freelance reporter for National Public Radio, Janet Heimlich won nine journalism awards, including the prestigious Katie, given by the Press Club of Dallas; the Houston Press Club’s Radio Journalist of the Year Award; and the Texas Bar Association’s Gavel Award. In addition to her radio work, Ms. Heimlich has written nonfiction articles for such publications as Texas Monthly, the Austin American-Statesman, the Texas Observer, Tribeza, and Edible Austin.

Breaking Their Will is published by Prometheus Books. The book is 326 pages long, with an additional 71 pages of endnotes and bibliography. You can buy the book here.