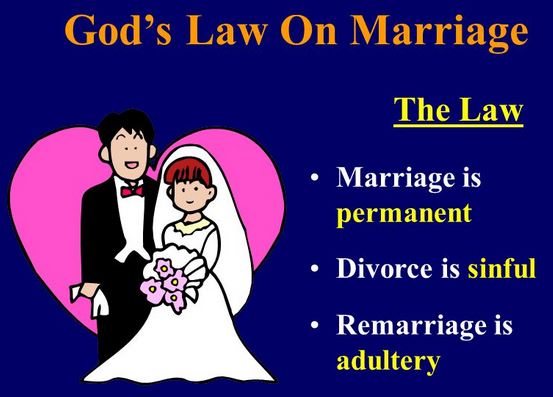 Archbishop Charles Chaput, head of the Roman Catholic Church in Philadelphia, reminded civilly divorced and remarried Catholic couples that they are NOT allowed to engage in sexual intercourse. Those who ignore Catholic teaching on divorce and remarriage, according to Archbishop Chaput, and have sex are committing adultery and are not permitted to take communion. CBS News reports:

The head of the Roman Catholic Church in Philadelphia is closing the door opened by Pope Francis to letting civilly remarried Catholics receive Communion, saying the faithful in his archdiocese can only do so if they abstain from sex and live “as brother and sister.”

Archbishop Charles Chaput, who is known for strongly emphasizing strict adherence to Catholic doctrine, issued a new set of pastoral guidelines for clergy and other leaders in the archdiocese that went into effect July 1. The guidelines reflect a stance taken by St. John Paul II.

Civilly remarried couples must have their previous marriages annulled before they can receive the Sacrament of Penance and eat the body of Christ and drink his blood. Having had a son and daughter-in-law go through the annulment process, I think I can safely say that Catholic marriage annulment is a way for the Church to get around the teachings of the Bible. Using theological sleight of hand and a mountain of paperwork, civilly divorced Catholics can have the Church wave a magic wand over their marriages and VIOLA! the marriage is jettisoned into outer space, never to heard of again. My wife and I, along with several of our older children, had to sign papers of behalf of my son, stating that has past marriage was defective and that he is of good moral character. I signed the papers because my son and daughter-in-law — who are already civilly married — can be viewed as married in the eyes of Church. I told them, at the time, that I thought the whole marriage annulment process was bullshit — a wink-wink, pretend-pretend act that says a previous marriage never took place. The things we do for our children.

It is  time for the Catholic Church to enter the 21st century. While some people see Pope Francis as a reformer, patiently dragging Neanderthals such as Archbishop Chaput into the modern era, I tend to see a man who is long on words and short on concrete action. The Pope says all the right things, but within the walls of Catholic Churches things remain just as they have been for the past hundred years. I will believe Pope Francis is a serious reformer when he issues papal decrees allowing women to be priests, same-sex couples to be married, and allows civilly divorced and remarried Catholics to be members in good standing — allowing them to take communion. I will believe the Pope is serious about reform when he roots out every last child abuser from within the Vatican and Catholic parishes. The Pope talks about the importance of good works, yet he himself is long on words and short on works. If Pope Francis wants to show that he truly cares about Catholic parishioners, how about telling Archbishop Chaput to shut the fuck up and stop attacking civilly divorced and remarried couples. And if the Archbishop refuses to obey the Vicar of Christ? Remove him from office. If the Catholic Church ever hopes to stop hemorrhaging members, it must embrace 21st century life, complete with its changing gender roles and sexual practices.

Millions of Roman Catholics are civilly divorced and remarried. Many of them hide their marital past from the church, thus allowing them to take communion. Suggesting as Archbishop Chaput does that these couples should sleep in the same bed night after night without engaging in sexual intercourse is absurd. To avoid adultery, civilly divorced and remarried couples are required to treat each other like siblings. As I read Chaput’s words, “undertaking to live as brother and sister is necessary for the divorced and civilly remarried to receive reconciliation in the Sacrament of Penance, which could then open the way to the Eucharist,” I thought, the Catholic Church is promoting incest.

By the way, there are Evangelical sects who hold to a similar view on divorce and remarriage. I plan to write a post on this subject at a later date.