The Hypocrisy of Evangelical Trump Voters Part One 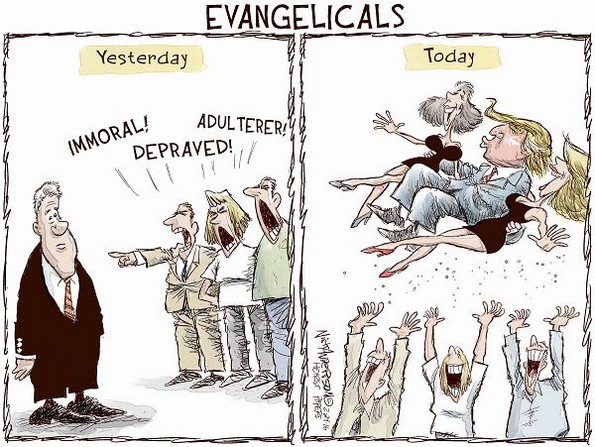 What happened to the people who, at one time, said they would only vote for a man who had a Christian worldview? Surely they know that Donald Trump is a misogynistic, narcissistic, adulterous liar, a man who, as John McCain before him, is using Evangelicals for political gain. Readers might remember, in an attempt to pander to the religious-right, McCain chose Sarah Palin as his running mate. I say chose, but what I really mean is that Evangelical power brokers forced McCain to add the former Alaska governor to the ticket. By choosing Fundamentalist Mike Pence as his running mate, Trump, in McCain-like fashion, is betting his political future on Evangelicals voting for him on November 8, 2016.

Millions of Evangelicals plan to vote for Trump regardless of what The Donald says or does. These Clinton haters and closet racists have been stewing for eight years now, forced to endure the indignity of living in country led by the Kenyan-born, Islamic sympathizer Barack Obama. These gun-toting, Jesus-loving voters would vote for Donald Duck if it meant ripping the helm of the U.S. government out of the hands of Democrats.

Millions of other Evangelicals have convinced themselves that Trump, once elected, will be sympathetic to the issues that matter to them. These people seem to be oblivious of the fact that past conduct is a good rule by which to judge how a candidate will act in the future. Trump is a thrice divorced skirt-chasing sociopath who rarely attends church. I have yet to hear one statement from the mouth of Donald Trump that remotely suggests that he has any idea about what means to be a follower of Jesus. I highly doubt he reads/studies the Bible or prays. Trump’s statement about having no need to ask God (or anyone else) for forgiveness should tell Evangelicals all they need to know about Trump’s moral and ethical compass. Despite all of this, millions of Evangelicals still plan to vote for Trump.

If Evangelicals want to be true to their so-call Biblical principles, it seems to me that they either should abstain from voting, vote for a third-party candidate, or write-in a God approved candidate. Instead, millions of Evangelicals who zealously hate President Obama and presumptive nominee Hillary Clinton plan to vote for a man who is the least qualified major party candidate in modern American history.

A month or so ago, scores of Evangelical leaders met with Donald Trump. When I read the pro-Trump comments made by men such as Tony Perkins and James Dobson, it finally dawned on me that many Evangelicals have sold their souls to the Devil. Once Hillary Clinton trounces Trump in November, the proverbial writing will be on the wall for the Republican Party. If Clinton wins the election, this means that Evangelicals have been unable to deliver the goods for three presidential election cycles — four if you consider the election George w. Bush stole from Al Gore.

After three straight losses, I wonder if Republican party leaders will finally wake up and realize that Evangelicals can’t deliver on their promises. As long as the Republican Party is being held hostage by the NRA, Evangelicals, and the Tea Party (Many Evangelicals are also members of the NRA and the Tea Party.) they will continue to lose general elections. Of course, from a Democratic perspective, this is wonderful news. But the Democrats have problems of their own, issues that were pushed to the forefront by Democratic Socialist Bernie Sanders. Democrats are just as doomed as Republicans if they fail to truly understand the social and economic angst that is fueling the unrest that has turned into protests and violence.

In many ways, we are reliving the 1960s with its protests and violence. If we as a people do not quickly learn from the past, we most certainly will repeat it. What has happened in recent weeks is but a preview of the bloodshed and outrage to come. Blacks have had enough. Police have had enough. Millennials are restless. Political leaders have their heads up the asses of corporate donors. There is increasing economic despair, a widening gap between the one percenters and everyone else. The United States is involved in numerous wars in the Middle East and is fighting secret wars in Africa. Drones continue to rain death upon terrorists and innocent civilians. The CIA, NSA, and the FBI continue to spy on American citizens, using tools sanctioned by President Obama and Congress. Increased word battles with Russia and China warn of a resurgence of the Cold War.

Throw all these things in a pot, season them with global warming, and there is no doubt that we have entered a dangerous time, one that could easily be turned into uncontrollable wildfire. Does anyone honestly believe that Donald Trump can handle these things, that he can lead us through the current political and social minefield? I am no fan of Hillary Clinton. I voted for Bernie Sanders in the Ohio primary, but now that Clinton will likely be the nominee, I must put the needs of my country first. A Trump presidency would be disastrous, turning the United States into butt end of a joke. Hillary Clinton may not be my first choice for President, but I know she is a seasoned politician who knows what matters. Republican leaders, cheered on by Evangelicals, have done their best to destroy Hillary Clinton, yet, here she is, still standing. Regardless of the facts concerning Benghazi or her misuse of email, Clinton knows how best to lead the United States forward during difficult times. I can’t think of one way a Trump presidency is better for America. Despite promises from Republican operatives that Trump will “change” after the election, he continues to act like a petulant child who has never had anyone tell him NO! Do we really want such a man to control the U.S. military and have access to nuclear launch codes? With all the turmoil in the Middle East, do we really want Trump to have the keys to the car? I know I don’t.

So I ask you this, Evangelicals: without mentioning your hatred for Barack Obama and Hillary Clinton, please give me one good reason why ANYONE should vote for Donald Trump.