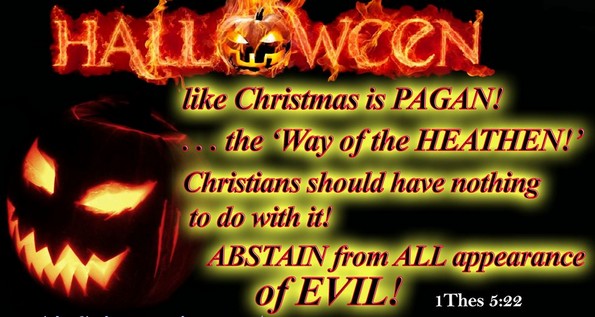 Listen up, readers. Halloween is pure Satanic evil. If you let your children participate in Halloween you are opening them up to demonic influence. What’s next, letting them use an Ouija board?

Darkness is used in Scripture as a metaphor for evil to represent all that is sinful and satanic.

In contrast, light is a biblical metaphor for good to represent truth and all that is of God.

The apostle Paul instructed, “Therefore do not be partakers with them. For you were formerly darkness, but now you are light in the Lord. Walk as children of light—for the fruit of the Spirit is in all goodness and righteousness and truth … And do not have fellowship with the unfruitful works of darkness; instead, expose them” (Eph. 5:7-9, 11).

It’s a tricky balance for Christians to be in the world without conforming to it.

It’s perfectly fine for a boat to be in the water, but if too much water gets in the boat, now that’s a problem. This brings up the question, “How should Christians treat Halloween?”

The origin of Halloween incorporated a mixture of Christian and pagan practices.

Some of what happens on Halloween is harmless fun, but anyone with any spiritual discernment cannot deny that there is a sinister side.

“Abstain from all appearances of evil” (1 Thess. 5:22). Sin, like art, starts by drawing a line somewhere! It’s an odd contradiction for Christians to dress their kids up as creepy characters they try to teach them not emulate.

At this time of year there is a tsunami of horror movies flooding the airwaves featuring vampires, witches, zombies, monsters, cannibals and savage serial killers. Hollywood and viewers, it seems, have an obscene obsession with and an insatiable appetite for gory violence.

You can’t avoid being bombarded by the commercials even if you just watch news or sports. These shows glamorize evil and open the door to demonic influences. Some say it’s all just fantasy or harmless entertainment, but, if what people watch doesn’t affect behavior, then why do companies spend billions of dollars to advertise to them?

In Greek Mythology, Zeus gave Pandora a box and a key as a wedding gift with a note “Do Not Open.” Curiosity overcame her and she lifted the lid releasing all the forces of evil into the world.

The point is there are some doors you really don’t want to open.

Contrary to popular belief, books and movies, there is no such thing as a “good witch.” That is an oxymoron. How can someone controlled by evil forces be good?

Paul asked the Corinthians, “For what fellowship has righteousness with unrighteousness? What communion has light with darkness?” (2 Cor. 6:14, MEV).

There are only two sources of supernatural power—God and Satan. If something is not of God, where does it originate?

If you are involved in any of these practices, I urge you to repent of it, renounce it and ask God to remove it from your life. Don’t gamble with your soul. Satan uses these and other ploys to deceive the masses.

While many deem Halloween as harmless fun and fantasy, Halloween subtlety disarms our (and especially our children) discernment of witches and the occult. Halloween’s magic potion of “fun and frolic” transformed witches, demons, devils and evil incarnate into “fine folks.” Over 1.2 million practicing and proud witches live in America. Witchcraft currently is the fastest growing religion in America. At some time, nearly every little girl becomes a witch on Halloween. Witch RavenWolf delights when a vulnerable little girl dresses as a witch on Halloween:

Today, just about every little girl in our society, at one time or another, has chosen to costume herself as a Witch. . . If you choose a Witch’s costume this Halloween . . . Hold your head up and wear your Witch’s garb proudly in their honor. (RavenWolf, Silver. Halloween: Customs, Recipes & Spells, p. 64)

Occult historian Jean Markale discloses Halloween bids more than childish dress-up. It is a pagan “initiatory journey” guided by someone [Satan] “hidden in the shadows,” and none “return from Halloween innocent”:

The passage into the world of Halloween is truly an initiatory journey. One does not return from it an innocent. But making the journey alone does not mean there was no guide, no initiator, someone who prompted the quest and who, sometimes hidden in the shadows, watches over the comings and goings of the neophyte through this labyrinth that is the Other World. (Markale, Jean. The Pagan Mysteries of Halloween, p. 127)

Halloween practices open the door to the occult and can introduce forces into people’s lives that they do not understand and often cannot combat. . . (Parker, Russ. Battling the Occult, p. 35)

Ex-witch Beth says she was repeatedly abused in Satanic rituals as a child:

Two years ago, as a brand new Christian, I came to the realization I had to let go of Halloween. As a non-Christian I absolutely loved Halloween. Obsessed really. I loved all things horror and gore, as a matter of fact. Zombies, witches, vampires, you name it. I was fascinated by all of it. We had quite the collection of Halloween decorations sitting in our garage that we had been working on for years. Costumes, skull lights, a severed head, tombstones, body parts, etc. All to make our yard look nice and festive for the Halloween season.

Walking away from my old life meant leaving behind all of my associations with witchcraft and the occult. That meant my books on witchcraft, gods and goddesses, my Buddha statues, crystals, tarot cards, and much more. I knew that witchcraft was not something to trifle with, because it was dangerous. It was allowing darkness into my life and my home, and I was done with the darkness. Done. The darkness had done nothing good for me ever, but Jesus had given me life and hope.

The next year on Halloween, I began to speak out about my testimony of how I broke free from witchcraft and that Halloween ia actually a pagan celebration. I was so passionate about sharing the truth with the world, because I didn’t want to see people getting sucked into the lies of the devil. So many people, Christians and non Christians alike, love Halloween. They get caught up in the season of Halloween, which is full of dressing up, parties, goodies, and other fun things. Little do they know that they are actually being a party to witchcraft in the process.

I remember last year speaking to a woman who was a satanic ritual abuse survivor and being so worried for her as she told me how difficult October is for her every year. I couldn’t quite understand why, but I knew that the increase of witchcraft activity must have a part to play in it. I learned more about the Satanic aspect of Halloween and the sacrificial murders that happen on this night. Yet it still seemed so far away from my own reality.

It was just about that time last year that I began to have my own memories of being abused and tortured in satanic rituals as a child. I was barely coming to terms with it even being real for me as the memories slowly came in every week. It has taken me an entire year to process and understand and come to grips with some pretty intense truths about myself and this world we live in. One of those being that Halloween is far more than just a pagan holiday where witchcraft is prevalent.

It was only recently that God took me into a memory of being in a satanic ritual on Halloween. I cannot even say how many Halloweens I was forced to be involved in rituals on Halloween, as I am taking my time going through as the Holy Spirit wills. What the Holy Spirit has shown me was being taken into a satanic ritual at the tender age of 3. I don’t think any person can truly fathom the reality and the evil of a satanic ritual, and I do not intend to ever go into great detail about them, but I am going to explain enough so that you can have a better understanding.

I wonder, if my grandkids give me some of their trick-or-treat candy, does that mean Halloween is okay? Damn right, Skippy. Bring on the candy, Satan be damned!

Of course, I am being a smart ass. Halloween is a fun, harmless holiday. Enjoy, watch out for cars, and bring Grandpa lots and lots of candy.