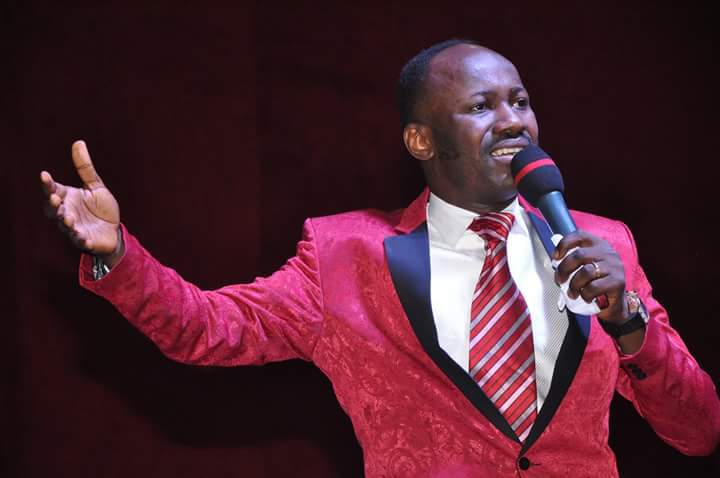 Omega Fire Ministry Worldwide leaders have barred church members from talking about what Apostle Johnson Suleman does with his johnson behind closed doors. Premium Times reports:

In a statement issued by the Directorate of Media, the church said commentaries on the matter had overstayed their relevance and the members should no longer allow themselves be distracted by it.

“It has become imperative that we advise all Omega Children and Christians Worldwide to put an end to the ongoing media war that we have engaged in,” the church said in the statement seen by PREMIUM TIMES.

“Every wise person would know that this is not a battle of humans but one between the Kingdom of God and that of darkness.

“Therefore, nobody is permitted further to issue a statement or comment on the matter. All Facebook Live Videos on the issue should also stop forthwith. It is advised that we spend our time concentrating on more relevant issues that bothers on the Kingdom.

“We are well aware were all these are coming from and we will deal with it spiritually.”

The statement came just as a second lady, who identified herself as Queen Esther, came forward on Sunday to speak about an alleged sexual relationship with Mr. Suleman (popularly known as Apostle Suleman).

For the most of last week, Mr. Suleman and a Canada-based singer, Stephanie Otobo, traded accusations over allegations of sexual affair, forceful abortion of pregnancy, and breach of marriage promise.

But in several videos posted online by Celebration TV, the church’s television arm, Mr. Suleman told his congregation that those behind the allegations would be destroyed within 24 hours.

One of the videos was uploaded on You Tube on Saturday.

“God just told me something. And in 24 hours, marine will be disgraced publicly. Marine…I’m not just prophesying on you, I’m prophesying on myself. In 24 hours, the truth will be exposed,” Mr. Suleman told his church members amidst cheers.

“In 24 hours, the marine kingdom will be disappointed. Kingdom of the water and their representatives, that made themselves available tool will be disgraced. And they shall know that it’s the ‘I am that I am’ that sent me.

“We don’t fight with our mouth; we fight with our knees. We can’t do certain things and still carry the anointing that we carry, no we don’t do that nonsense.

“If I’m true or not true, real or not real, 24 hours. I’m tough mehn, I’m tough. You don’t see me preaching? Do I look shaky? Do I look worried? Get a better agent.

“If the devil wants people to start doubting you, he attacks your reputation. We know this.

Johnson Suleman, the controversial Nigerian pastor at the center of an adultery scandal gave a $76,000 brand-new Mercedes-Benz 450 GL to Nollywood star Daniella Okeke in 2016, an official Lagos State website shows.

Ms. Okeke was previously named by Stephanie Otobo, Apostle Suleman’s estranged lover, as being one of the other women in his life.

For her part, the actress in 2016 proudly displayed the Mercedes-Benz SUV GL 450 on her Instagram page in front of a brand-new house where she parked it.

After her name was revealed by Ms. Otobo at a press conference covered extensively by Saharareporters, some Nigerians invaded Ms. Okeke’s Instagram questioning the source of her wealth given that she has not featured in any prominent movies in recent years.

The more inquisitive among them took advantage of a new website for vehicle registration in Lagos State which unveils the ownership of any vehicles by its number due to a bug on the webpage, and discovered that one of Ms. Okeke’s most prized possessions, the posh Mercedes-Benz car, is registered to “Apostle Suleman Johnson.”

This discovery is the second window into the pastor’s private life following the one opened by Ms. Otobo, but he has vigorously denied the amorous relationship she claims to have had with him.

Last week, Ms. Otobo was arrested and detained by Apostle Suleman, who procured some federal police officers to rough up the woman.  She was behind bars for a few nights.

Ms. Otobo had insisted that Apostle Suleman impregnated her following sex romps in Italy, New York and Nigeria.  The pastor denied the allegations and threatened to sue SaharaReporters for reporting the story.

In a rebuttal on Friday, the law office denied that Mr. Keyamo, its Head of Chambers, was actively involved in the matter, as he has been in Abuja.  It described the pastor’s allegations of a conspiracy against him as pathetic, ludicrous and a nonsensical smokescreen.

Among others, the chambers revealed that the pastor paid millions into Ms. Otobo’s account and that it has pictures of him exposing his private parts, evidence of which it said would emerge in court.  It also stated that other victims of the pastor have started to come forward to tell their stories, armed with proof.