Why I Hate Jesus 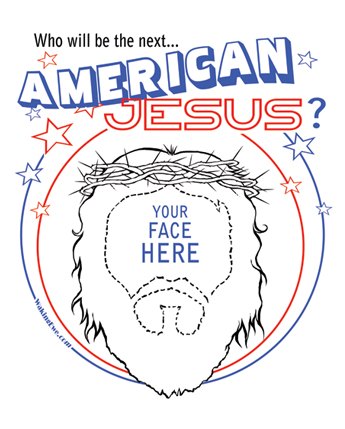 I don’t hate the flesh and blood Jesus who walked the dusty roads of Palestine, nor do I hate the Jesus found in the pages of the Bible. These Jesuses are relics of the past. I’ll leave it to historians to argue and debate whether these Jesuses were real or fiction. Over the centuries, Christians have created many Jesuses in their own image. This is the essence of Christianity, an ever-evolving religion bearing little resemblance to what it was even a century ago.

The Jesus I hate is the modern, Western Jesus, the American Jesus, the Jesus who has been a part of my life for almost fifty-eight years. The Jesuses of bygone eras have no power to harm me, but the modern Jesus – the Jesus of the three hundred thousand Christian churches that populate every community in America – he has the power to affect my life, hurt my family, and destroy my country.  And I, with a vengeance, hate him.

Over the years, I have had a number of people write me about how the modern Jesus was ruining their marriage. In many instances, the married couple started out in life as believers, and somewhere along the road of life one of them stopped believing. The still-believing spouse can’t or won’t understand why the other spouse no longer believes. They make it clear that Jesus is still very important to them and if forced to choose between their spouse and family, they would choose Jesus. Simply put, they love Jesus more than they love their families.

This Jesus cares nothing for the poor, the hungry, or the sick. This Jesus has no interest in poor immigrants or unwed mothers. This Jesus cares for Tim Tebow more than he does a starving girl in Ethiopia. He cares more about who wins a Grammy or ACM Award than he does poverty-stricken Africa having food and clean water. It is this Jesus I hate.

This Jesus is on the side of the culture warriors. This Jesus hates homosexuals and demands they be treated as second class citizens. This Jesus, no matter the circumstance, demands that a woman carry her fetus to term. Child of a rapist, afflicted with a serious birth defect, the product of incest or a one night stand?  It matters not. This Jesus is pro-life. Yet, this same Jesus supports the incarceration of poor young men of color, often for no other crime than trying to survive. This Jesus is so pro-life he encourages American presidents and politicians to slaughter innocent men, women, and children. This Jesus demands certain criminals be put to death by the state, even though the state has legally murdered innocent people. It is this Jesus I hate.

This Jesus drives fancy cars, has palaces and cathedrals, and followers who spare no expense to make his house the best mansion in town. This Jesus loves Rolexes, Lear jets, and expensive suits. This Jesus sees the multitude and turns his back on them, only concerned with those who say and believe “the right things.” It is this Jesus I hate.

This Jesus owns condominiums constructed just for those who believe in him. When they die, he gives them the keys. But, for the rest of humanity, billions of people, this Jesus says no keys for you. I have a special Hitler-like plan for you. To the ovens you go, only unlike the Jews, I plan to give you a special body that allows me to torture you with fire and brimstone forever. It is this Jesus I hate.

This Jesus divides families, friends, communities, and nations. This Jesus is the means to an end. This Jesus is all about money, power and control. This Jesus subjugates women, tells widows it’s their fault, and ignores the cry of orphans. Everywhere one looks, this Jesus hurts, afflicts, and kills those we love. It is this Jesus I hate. What I can’t understand is why anyone loves this Jesus? Like a clown on a parade route, he throws a few candies towards those who worship him, promising them that a huge pile of candy awaits them when they die. He lets his followers hunger, thirst, and die, yet he tells them it is for their good, that he loves them and has a wonderful plan for their life. This Jesus is all talk, promising the moon and delivering a piece of gravel. Why can’t his followers see this?

Fear me, he tells his followers. I have the keys to life and death. I have the power to make you happy and I have the power to destroy your life. I have the power to take your children, health, and livelihood. I can do these things because I am the biggest, baddest Jesus ever. Fear me and oppress women, immigrants, orphans, homosexuals, and atheists. Refuse my demand and I will rain my judgment down upon your head. But, know that I love you and only want is best for you and yours. It is this Jesus I hate.

Perhaps there is a Jesus somewhere that I could respect, a Jesus who might merit my devotion. For now, all I see is a Jesus who is worthy of derision, mockery, and hate. Yes, hate. It is this Jesus I hate. When the Jesus who genuinely loves humanity and cares for the least of these shows up, let me know. In the meantime, I hate Jesus.