Dear President Trump, Drone Attacks on Civilians Are Atrocities Too

Let me see if I understand things correctly:

American soldiers raining drone missiles down on the heads of civilian Syrian men, women, and children — not an atrocity.

Leveling Syrian cities and villages with American bombs and missiles — not an atrocity.

Turning Syrian children into orphans — not an atrocity.

Two decades of maiming and killing tens of thousands of Syrian, Afghani, and Iraqi civilians — not an atrocity.

All the murderous violence perpetrated in the name of the war on terror and fighting them over there so we don’t have to fight them here has been deemed business as usual — regrettable collateral damage.

Americans are expected to believe that some sort of imaginary red line has been crossed with the alleged gassing of Syrian men, women, and children. What makes these dead more dead than previous deaths? What are we to make of President Trumps faux-moral outrage — as if the man has a moral compass to begin with? How is the President’s saber-rattling anything more than an attempt to distract from the Mueller investigation? What’s the one thing that brings Americans together? War. Not the endless war currently fought in the Middle East. No, what President Trump, Republicans, and some Democrats want is a good, old-fashioned, tit-for-tat, bombs-bursting-in-air war. What better way to say to the world that Trump didn’t collude with Russia to pervert justice and steal an election than to get into a shooting match with the Soviets? What better way to direct our attention away from trillion-dollar annual deficits — thanks to Republican tax cuts — than to give the military-industrial complex billions in new revenues; money that will be spent waging war against Communism and Islam? War is good for the American economy, and it sure as hell is good for the souls of people who think that the United States has been given a divine mission by the Christian God. What’s more thrilling than blood offerings to the God of war?

I wonder, where will God and Republicans be when notifications are made to families about the deaths of their loved ones? Where will God and the ruling class be when a regional war spins out of control and paves the way for an apocalyptic military confrontation between the United States and Russia or the United States and China, or even the United States and Iran or the United States and North Korea? Why not pick two and take them on? We whipped Germany and Japan, right?  Surely, we are more than ready and able to use our military might to assert our will across the globe, thinks Donald Trump. Why have soldiers and weapons of mass destruction if you aren’t going to use them? (Trump asked this very question about nuclear weapons.) Now that President Trump has rid his cabinet of people who could temper his murderous ambition, who will stand in his way as he embroils the world in war?  Who’s going to keep the toddler-in-chief from pushing the shiny big red button on his desk; not the one meant for ordering take-out from McDonald’s; the other red button, the one that unleashes the book of Revelation on planet Earth?

The warmongers — who never met a war they didn’t like — and the rich — who never met a war they couldn’t turn into profit — are now running the show. American soldiers are little more than tools used to advance a nationalistic, theocratic, hyper-capitalistic agenda. Men and women who deeply love their country will die, and to what end? Exactly what change will come from American blood being spilt on Middle Eastern sand? Pray tell, what will be gained by killing more Syrian civilians? What will be gained by dragging the world into a homicidal armed conflict? Nothing, nothing, absolutely nothing.

There’s never been a time in history where war brought peace. Only peace begets peace, and until the United States understands this, countless civilians will continue to die. President Trump and Congress have the power to put an end to war. Every past president and congress had the same power. War will end the moment we lay down our weapons and choose a peaceful path. As long as American policy is enforced by violence and death, we can expect never-ending war and conflict. A bleak prospect indeed, but we must not avert our eyes from the reality unfolding before us. 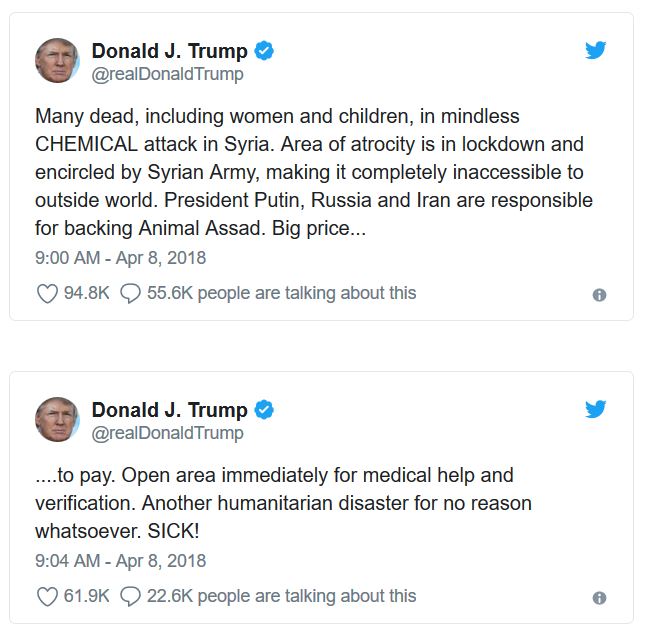 This is about humanity, we’re talking about humanity, and it can’t be allowed to happen. We’ll be making that decision very quickly, probably by the end of today. We cannot allow atrocities like that. If it’s the Russians, if it’s Syria, if it’s Iran, if it’s all of them together, we’ll figure it out. You don’t see things like that, as bad as the news is around that world, you just don’t see those images. (Donald Trump, April 9, 2018)