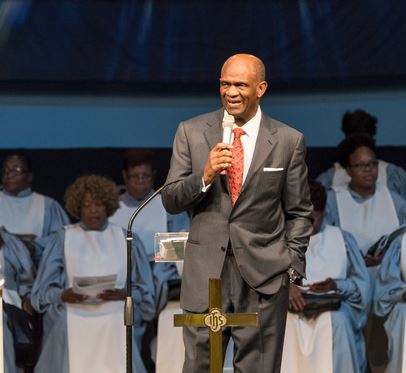 A Shreveport financial planner and the pastor of a Houston, Texas, megachurch are accused of bilking investors of more than $1 million.

Smith is the owner of Greg Smith Financial Group. Caldwell is pastor of Windsor Village United Methodist Church, a 16,000-member megachurch in Houston. He was an unofficial advisor to former presidents George W. Bush and Barack Obama.

These bonds were issued by the former Republic of China prior to losing power to the communist government in 1949. They are not recognized by China’s current government and have no investment value.

Smith and Caldwell promised high rates of return, sometimes three to 15 times the value of the investments, according to the indictme.

A prominent Houston pastor and spiritual adviser to President George W. Bush has been indicted on federal charges he sold more than more than $1 million in worthless Chinese bonds to elderly and vulnerable investors, according to federal authorities.

Kirbyjon H. Caldwell, 64, and Shreveport financial planner Gregory Alan Smith, 55, were indicted Thursday on 13 charges accusing them of wire fraud and money laundering, the U.S. Attorney’s Office for the Western District of Louisiana said in a Thursday statement.

Caldwell is accused of using his position as the senior pastor of the Windsor Village United Methodist Church to lure more than $1 million in investments into historic Chinese bonds that are not recognized by the Chinese government. He and Smith told investors they could see returns as high as 15 times their initial investment, prosecutors said.

The indictment accuses the men of cheating 29 investors between April 2013 and August 2014 of nearly $3.5 million for what were described as “mere collectible memoribilia.”

Caldwell, a Houston native, developed a friendship with George W. Bush when he was governor of Texas, and he offered the benediction to Bush’s 2001 inauguration as president. He also performed the wedding for Bush’s daughter, Jenna, in Crawford in Central Texas.

Caldwell co-authored a 1999 book, The Gospel of Good Success. His work is credited with helping create the White House Office of Faith-Based and Community Initiatives under Bush.

The man who is a co-defendant with Houston Pastor Kirbyjon Caldwell in a case accusing them of defrauding investors of millions of dollars pleaded guilty Tuesday to wire fraud.

The pair told investors that the historical Chinese bonds, which reportedly have been in default since 1939 and aren’t recognized by the current Chinese government, could provide exorbitant, risk-free returns on their investments and that the bonds would be sold by Caldwell to a third party or redeemed by the Chinese government, court documents state.

The indictment states Smith recruited the victims through his connections to prospective investors, telling them he was an investment advisor and had personally invested hundreds of thousands in the deal.

Caldwell and Smith promised investors they would be paid and offered a wide range of excuses for why they were not seeing returns, according to court documents.

Caldwell, 64, received $760,000, which he used for personal expenses, including mortgage payments, the indictment claims.

Caldwell’s limited liability company also received $1 million, of which $175,000 was transferred to Caldwell, according to the indictment.

Smith received $1 million of investor funds, which he used for luxury vehicles, the indictment claimed.

None of the investors received any money back, according to the court documents.

Caldwell continues to insist that he is innocent. His trial is scheduled to begin on December 2, 2019.