A Cross He Could, and Would, Not Bear 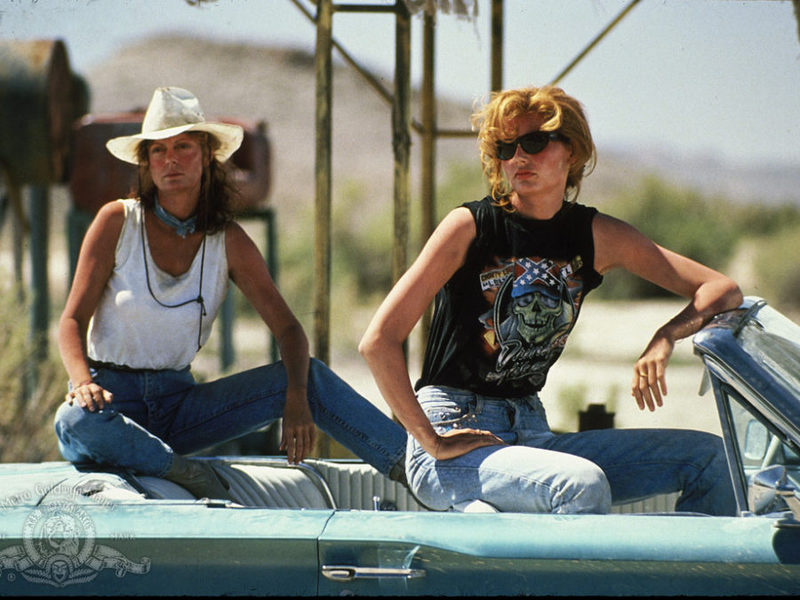 When Thelma & Louise came out, it seemed that people reacted in one of two ways. Some viewers were unhappy that the two title characters fled after Thelma shot and killed the man who tried to rape her. Others — including nearly all of the women I knew — elevated those characters into heroes. One even said she felt a “catharsis” when Harlan is struck by the bullet from Thelma’s gun.

I could have said the same: When Thelma fired that gun, I vicariously struck back — at what? She did to her aggressor what I wish I’d done — to whom?

At the time I saw the film, I had not yet come to terms with the childhood sexual abuse I suffered from a priest. Those experiences were submerged within me, occasionally bubbling up through nightmares and unconscious behavior. Also, I was many years away from starting my gender-affirmation process. I was living as a man, with a deep hatred of the male species (that’s how I thought of them) and resentment of my membership in it.

I saw Thelma and Louise with the woman I was dating. She knew of my attitudes about men and referred to me, only half-jokingly, as a “male lesbian.” To her, my response to Thelma’s action was just an expression of how I felt about men generally. I accepted that explanation simply because, at that time, I couldn’t come up with a better one.

There was another part of my response to the film which I understood full well, but discussed with no one—not even my woman friend. I completely sympathized with Thelma and Louise running from the law. Actually, Thelma wanted to call the police, but Louise understood that no one would believe her claim of attempted rape, especially since Thelma had been drinking and dancing with Harlan before he tried to attack her. Now, I wasn’t drinking or dancing with the priest before he took advantage of me sexually, but I knew that even if I’d had the language to describe, and make sense of, what happened to me, no one (at least, no one I knew then) would have believed me. I grew up in a conservative community where nearly everyone attended the same church I did, and many kids were my classmates in my Catholic school. In such a milieu, nobody — especially a child — has more credibility than a priest.

A recent news story brought to mind my reaction to Thelma and Louise — and to earlier experiences. I first heard the story from a friend of mine in France, and it made its way into English-language media during the past few days.

A 19-year-old boy confronted the priest who, earlier, abused him. That, of course, is something I wish I could have done to my abuser, who died three decades before I spoke of his actions with anyone. Then the young Frenchman did a Thelma, if you will: He killed that priest.

I will admit that in hearing the story, I vicariously struck back at my abuser. Perhaps that reveals some baseness in my character. If it doesn’t, then perhaps this does: I also felt a vicarious thrill in picturing the young man vanquishing his abuser.

All right, I’ll admit: It was the way he tore the life out of that man of the cloth that so excited me. In fact, I’ll confess something perhaps even cruder: I found myself wishing I’d come up with the way he ended a decades-long string of abuses.

According to reports, the young man, identified only as “Alexandre V.” suffocated the priest by ramming a cross down his throat.

Yes, you read that right.

Now, I know that killing should never be condoned: I have opposed capital punishment from the moment I learned about it. Still, I have to concede that if I were on a jury at his trial, I would have a difficult time voting to convict him. I would hope that other jurors, and a judge, would consider not only Alexandre’s suffering, but also the way the priest “shattered a whole family,” in the young man’s words.

He was not being at all hyperbolic. Perhaps not surprisingly (at least, I’m not surprised to learn) the prelate, Father Roger Matassoli, is also alleged to have abused Alexandre’s father as well as other boys during the time he served in the northern French diocese of Saint-Andre-Farivilliers.

Alexandre probably knew about other boys Father Matassoli is said to have abused. What he and his father—as well as their fellow parishioners — probably didn’t know, until the allegations of abuse came to light, was the circumstances by which Father Matassoli arrived at their Oise parish. They probably knew only that he was transferred to their diocese from the diocese of Clermont in 1967 because of — you guessed it — allegations of sexual abuse which, of course, the church hushed up.

How many lives and families did Father Matassoli “shatter” there? We may never know, but at least that cycle has been broken.

Now I can only hope that young Alexandre gets the help he’ll need — and Thelma never got. I know how much they both need it: It took me nearly half a century to get help.

And help is all he can hope for. Although it’s tempting to see a young man ramming a cross down the throat of a priest who abused him as a kind of “poetic justice,” the truth is that there is no justice in situations like ours. I just hope that the French authorities understand as much. At least he is in a country where such help is not contingent on his (or his family’s) ability to pay for it, and where the church is losing its power to silence victims young and old.