From 1976-79, my wife and I attended Midwestern Baptist College (IFB) in Pontiac, Michigan. Midwestern, an unaccredited Independent Fundamentalist Baptist (IFB) college, was established in 1954 by the famous IFB pulpiteer Dr. Tom Malone. Forty years later, the college campus is up for sale, Tom Malone is dead, and the church he once pastored, Emmanuel Baptist Church is shuttered with weeds growing around the buildings and through the cracks in the parking lots. Due to increased costs, buildings that are falling apart, and declining enrollment, Midwestern moved to Orion, Michigan so it could use the buildings of Shalom Baptist Church for classes. David Carr, Midwestern’s president, is the pastor of Shalom Baptist.

In the spring of our sophomore year, Dr. Malone gathered the student body in the chapel so he could talk to them. Students were told to bring the recently released 1978 yearbook with them. As the students settled into their seats, Dr. Malone stood up and came to the pulpit. It was clear that he was quite upset about something. We quickly learned that Dr. Malone was livid about three of the yearbook pictures. The photographs were shot by Mike Veach, currently the pastor of First Bible Church, a fundamentalist church in Staten Island, New York. Mike was (is) a wonderful photographer. A few months after what students would later call “The Yearbook Incident,” Polly and I went to nearby Cranbrook Gardens so Mike could take pictures of us. We still have these pictures, reminders of the youngsters we once were some forty years ago.

What was so offensive about these photographs, that a noted IFB pastor and college chancellor would deem it necessary to talk to the entire student body about them? See for yourself. 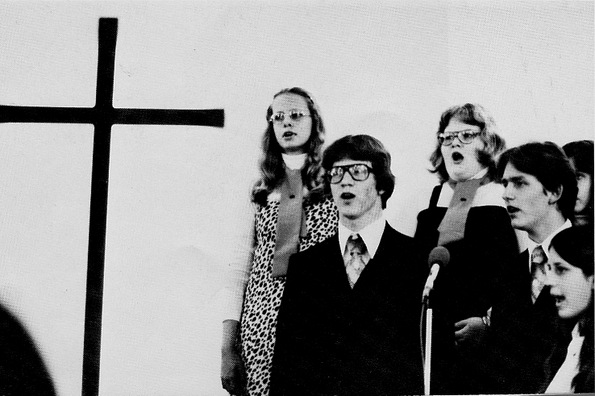 Photograph number one was taken during Founder’s Day. Always held on the Friday after Thanksgiving (students were not allowed to go home for Thanksgiving), Founder’s Day was a day set aside for showing the college to prospective Fundamentalist high school students.  Part of the day’s events included a singing talent show. This picture is of a group from a nearby IFB church. 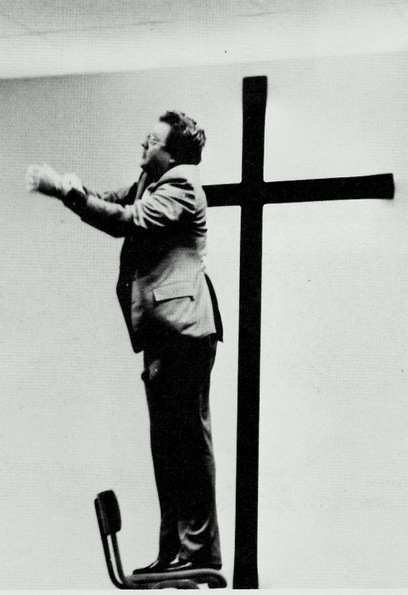 Photograph number two is a picture of Julian Lyons, the Emmanuel Baptist Church bus pastor. Lyons and I did not get along. He considered me a slacker because I didn’t want to work in the bus ministry after my freshman year. (All students were required to work in the bus ministry their freshman year.) I considered Lyons a racist because he stopped running the buses in Detroit. (The overwhelming majority of the kids from Detroit were poor and black.) One day, as I was exiting the school building, he and I ran into each other and had words, each telling the other what we thought about them. We never spoke again. I was surprised that I did not get expelled from school for what was surely viewed as insubordination. 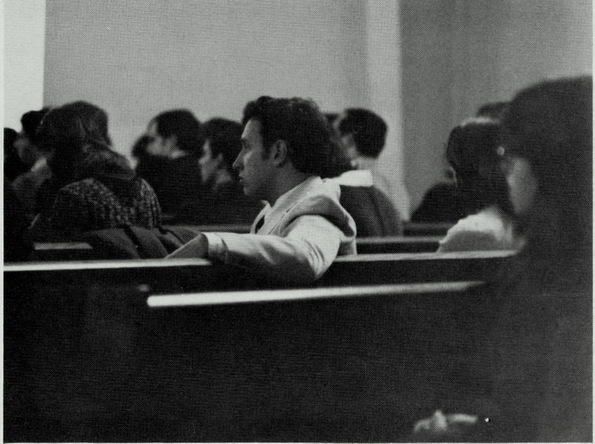 Photograph number three was shot during one the chapel services. Pay close attention to the student in the middle of the picture.

I am sure you are scratching your head right now, trying to figure out what is wrong with these pictures. Can’t you see it? Look closely. Put your IFB alternate reality glasses® on…Still nothing?

In the first picture, the boys have long hair, and in the second picture it looks like Lyons’ hair is over his collar. Midwestern had/has a strict policy against men having long hair. Male students were required to keep their hair short, with the college even going so far as to legislate that the back of men’s hair had to be tapered and not block cut.

And the third photograph? The student “looks” like he has bushy, long hair on the back of his head. What he really has is the hair of the student in front of him, that student being my future wife, Polly. As photographers know, perspective and angles can do strange things to photographs. Sadly, Dr. Malone was only concerned with the “appearance of evil” (I Thessalonians 5:22).

Dr. Malone was furious over these photos, so much so that he took one of the yearbooks and tore it in two right in front of the student body. He then ordered the yearbooks collected. The yearbooks were later returned, but not before the offending photographs had been marked-out with black, permanent ink felt markers.

So why do I have an unaltered copy of the yearbook? I refused to turn my yearbook in to prison authorities. Even then, as Fundamentalist as I was, I knew that Dr. Malone was acting like a crazed wild man over these photographs. It made no sense to me to mar the yearbook just because three of the pictures showed men with long hair. If Dr. Malone was serious about giving “sins” the black permanent marker of death, why not mark out:

Both of these “sins” were well known by students, yet they were pushed to the deep recesses of the Midwestern closet. Instead, very ‘70s looking hair became the target of Dr. Malone’s “righteous” indignation and wrath.

I know these kind of stories sound bat-shit crazy to some readers, but this is a good example of the Fundamentalism I was raised in and a part of for many years. To this day, there are IFB pastors and churches who preach against the “sin of men having long hair.”  A man with long hair is considered rebellious and effeminate. If you have not read my post Is it a Sin to Have Long Hair?, please do so. I think it will help you understand the kind of thinking that goes into someone concluding that men having long hair is some sort of mortal sin.

Every week, there are a dozen or so Google searches on “is it a sin to have long hair”  which result in a person being brought to this website (first page, seventh search result).