Last week, the National Football League (NFL) held its annual scouting combine. Eli Apple, an Ohio State standout, attended the event, which is meant to showcase the talents of NFL hopefuls. During one of the interview sessions, Atlanta Falcons secondary coach Marquand Manuel asked Apple, “Do you like men?” Manuel’s question caused quite an uproar, resulting in the Atlanta Falcons coaching staff being required to take an NFL-approved social training class. Atlanta coach Dan Quinn said Manuel received additional training. Most people think that a player’s sexuality is irrelevant. All that should matter is what players do while on the playing field.

Peter LaBarbera, chief homophobe for Americans for Truth About Homosexuality, wants to know who is doing the counseling. One News Now reports LaBarbera saying:

First, why would it matter whether a counselor holds a negative view of   Christianity (actually Evangelical Christianity)? Isn’t the ONLY issue the fact that a person’s sexual identity and preferences are out of bounds and have no bearing on whether a player is NFL material? LaBarbera needs to understand that people of his ilk are no longer in control of our culture’s understanding of human sexuality. Most Americans now know at least one person who is gay. They are no longer willing to damn to hell friends, family, and work colleagues who just so happen to be gay. As with many former homophobes, my view of homosexuality changed once I met and befriended someone who batted from the wrong side of the plate.

Second, I am convinced that those who scream the loudest about the sin of homosexuality often are closeted gays themselves. In the same One News Now article, LaBarbera stated:

“I saw — I think it was a hockey game — where they had the kissing cam, and it was two guys kissing. And our kids are there. Do we want our sons and daughters to think it’s okay for two people of the same sex to kiss? It’s not okay! It’s immoral! It’s wrong!”

I wonder, is LaBarbera really “offended” by two men kissing, or does their kiss cause some sort of sexual stirring — one that must be suppressed lest the true Peter LaBarbera be forced out of the closet? My money is on the latter. Every time I see a picture of LaBarbera I think, this guy is a closeted gay. 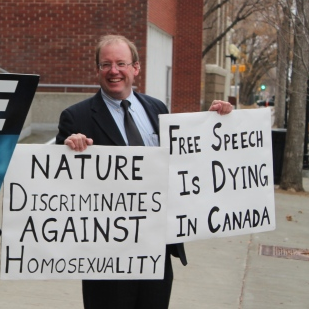 Here’s to hoping that contumacious LaBarbera will have a Ted Haggard moment. The Evangelical closet is chock-full of gays — male and female. Those who take the high moral road often drive off a cliff, crashing and bursting into flames, exposing for all to see their lies and hypocrisy. When these crashes happen, the world rightly laughs and ridicules the fallen saints—not because of their religion, but because they dared to think that they were morally superior to the unwashed, uncircumcised Philistines of the world.

For readers who might not be familiar with LaBarbera, here is a partial list of things he has said about gays:

“Only a decaying society pretends that homosexual relationships are morally equivalent to normal, male-female couples.”

It’s almost as if homosexual sodomy was created to spread disease.”

“My test is [to] substitute another sexual sin and see if it makes sense. Would we be talking about a survey of porn-using Christians or incestuous Christians? That sounds stark, but that’s, I believe, the appropriate biblical analogy.”

“I think there are Christians who struggle with the sin of homosexuality — but proud homosexual Christians? That’s an oxymoron to me in the same way as I would say proud adulterous Christians,” he adds. “And so, I think we have to be very careful because I see the tactic of the Emergent Church and the Christian left is to start talking more and more about ‘gay Christians,’ and what they end up doing is demonizing the so-called ‘Religious Right’ and saying that the Religious Right is all wrong in the way it has talked about homosexuality.”

“And have you considered the likelihood that some of the homosexuals will request sex-change procedures? I know for a fact that a significant percentage of my Law School class was undergoing sex-change therapy or surgery.”

“During my enlisted service, homosexuals seemed to be a clumsy lot. They had a tendency to repeatedly fall headfirst down an engineroom ladder. Some were even known to trip on deck and “fall” overboard.”

“If we get to pick and choose which laws we uphold, which laws are next on the line to ignore? Carnal Knowledge? I would think a service man or woman who has sex with a minor (Carnal Knowledge) could perform military duties as well, if not better, than a homosexual.”

“This is what’s going to happen all across the country the more homosexuality is promoted by the armed services. I would venture to say that someday, we’ll see servicemen marching in uniform in a sexual sin parade like what we saw here in San Diego. So the fact is homosexuality, in other words sin, does not stay in its closet; it always wants to boast and be prideful.”

Dear Peter LaBarbara, If Gays Aren’t Born That Way Neither are Heterosexuals

One of Dennis Hastert’s alleged victims was a gay man who died of AIDS in 1995.  Peter La Barbara, the homophobic director of Americans for Truth About Homosexuality, wrote a post about this man, suggesting that Hastert “made” the man into a homosexual. Here’s what LaBarbara had to say:

“The is a gripping aspect to this story that most media would dare not cover or investigate: the sad reality that there are many “gay” “Steve Reinboldts” out there: victims of adult homosexual predators–victims whose “gayness” was effectively chosen for them by alleged abusers like Hastert. The media and the powerful LGBT Lobby want us to believe that men and women are “born gay,” or at least that this is a “natural” sexual identity. Yet the many testimonies of homosexual men and women who recall being sexual abused as a child–they might not call it ‘abuse’–by an adult or an an older teen or a sibling, suggests otherwise. Common sense tells us that such predatory abuse scars and confuses the victim and influences his choice to embrace a deviant and immoral sexual lifestyle. And common sense also tells us that homosexuals who acknowledge childhood sexual abuse in their past yet assert that it has nothing to do with their out-and-proud “gay” identity are in deep, deep denial.”

“The is a gripping aspect to this story that most media would dare not cover or investigate: the sad reality that there are many “heterosexual ” “Steve Reinboldts” out there: victims of adult heterosexual predators–victims whose “heterosexuality ” was effectively chosen for them by alleged abusers like Hastert. The media and the powerful Heterosexual Lobby want us to believe that men and women are “born heterosexual ,” or at least that this is a “natural” sexual identity. Yet the many testimonies of heterosexual men and women who recall being sexual abused as a child–they might not call it ‘abuse’–by an adult or an an older teen or a sibling, suggests otherwise. Common sense tells us that such predatory abuse scars and confuses the victim and influences his choice to embrace a deviant and immoral sexual lifestyle. And common sense also tells us that heterosexuals who acknowledge childhood sexual abuse in their past yet assert that it has nothing to do with their out-and-proud “heterosexual ” identity are in deep, deep denial.”

See how easy that was, Peter LaBarbera?