Tennessee:Making the Bible the State Book and Teaching Bible Basics to Elementary Students 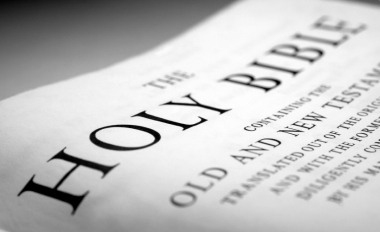 Evidently, the enlightenment hasn’t made it to Tennessee. The legislature in the Volunteer state is considering a bill that would make The Holy Bible® the official state book.

The Holy Bible is hereby designated as the official state book.

This act shall take effect upon becoming a law, the public welfare requiring it.

The Establishment Clause in both the U.S. and the Tennessee Constitutions requires the government may not convey a message that a particular religious belief is preferred. Officially designating the Holy Bible, a specifically Judeo-Christian religious text, as the official state book would place the State’s seal of approval on the Holy Bible and undoubtedly demonstrate the State’s preference for Christianity.

These bills could cause Tennesseans who do not subscribe to the Christian faith to feel like outsiders in their own state. The state should instead adopt a state book that makes all Tennesseans feel equally welcome in their state.

No need for further commentary from me. I agree with Americans United.

According to WBIR, (link no longer active) Tennessee lawmakers have delayed making the Bible the official state book; not out of concern over offending non-Christians, but because designating the Bible as the state book “cheapens” The Holy Bible®. Senate Majority Leader Mark Norris, R-Collierville stated:

“We’re being asked to make the Bible, any Bible, any version of it, an object, like the state reptile. Like the raccoon, the salamander, the nut, the fish. I think it’s demeaning. I think it reduces the Holy Bible from scripture to a politically correct history book.”

Sen. Steve Southerland, R-Morristown, the sponsor of the bill, wants Tennessee residents to know that he isn’t out “to cultivate adherence to religious (practices) or aid in religious devotion.” Southerland, wink wink, just wants to “memorialize the role the book has played on Tennessee history.” Sure Steve, sure.

“The Bible is something to everyone. And each time you read it, it might mean something to you. Everyone has the right to agree or disagree, is one of the good things about the Bible. We’re not saying you have to take it and read it, it’s just giving recognition to it.”

In other Tennessee Bible news, parents in the Grundy County School District are upset because the school board ended a Bible study program designed to teach elementary school children “Bible basics”. According to the Christian Examiner:

Parents and other supporters are gathering signatures to petition the Grundy County School Board to renew a voluntary Bible study program which taught their children Bible basics at elementary schools in this district which is located between Nashville and Chattanooga, Tennessee.

The Grundy County School Board ended the program in March but not on its own initiative. The Freedom from Religion Foundation, a Wisconsin-based anti-Christian group that claims 21,500 members nationwide, complained that the program of instruction was “pernicious.”

FFRF complained that a “missionary was allowed to prey on a captive audience” that was “young and vulnerable.”

Many parents, however, announced they were only too happy for “Bible Man” Horace Turner to “pray” for their children and pass along some Bible basics that support what is being taught in the home.

According to the Grundy County Herald, the school board consulted with Alliance Defending Freedom and the Christian Law Association.

Board Chairman Tim Spicer said both groups were “surprised and thankful” the program existed this long without objection, and suggested to him simple adjustments could be made that would allow it to continue.

“The simplest way would be to make it an after school program just like any other club or activity,” Spicer said. “The second option is to have what is called ‘release time’. With this, parents would sign permission slips allowing their children to participate in Mr. Turner’s program during school hours.

“The catch is that the program must be conducted off school grounds,” Spicer added, “and someone other than the school system would have to provide transportation.”

I am sure that local Christians will turn this into yet another example of persecution. It really must be rough trying to be a Christian in Tennessee. (Please read previous sentence with the snarkiest voice possible)

According to the Pew Research Religion and Public Life Project, 51% of Tennesseans are Evangelical, twice the national average.

78% of Tennesseans believe the Bible is the Word of God and 52% attend church on a weekly basis. Tell me again, why is it important for Grundy County School elementary students to be taught “Bible basics”? Aren’t they getting enough of The Holy Bible® at home and at church? Or is this more about making sure that everyone understands that there is only one God in Tennessee and his name is Jesus.