snark and ridicule ahead!

I am at a loss to understand why government officials in North Carolina haven’t called me so I could tell them WHY sharks are attacking people along the North Carolina coast. Based on everything I’ve read on Evangelical and Catholic blogs and news sites, the reason for the shark attacks is because

This will be the reason given for every calamity from this point forward. And don’t think for a moment there’s not some Schlitz-drinking, AK-47 carrying, mud wrasslin loving, King James Bible toting, fundamentalist Christian who thinks this way. In their mind, once same-sex marriage was legalized, the foundation of Western civilization came tumbling to the ground.

Here’s what you’ll hear in the future after Sunday go-to-meeting at Thirteenth Baptist Church in Rednecknakedville, North Carolina:

Jerry Falwell and the Moral Majority ramped up the culture war in the late 1970’s.  Since then, groups like the American Family Association, Family Research Council, Christian Coalition, Concerned Women for America, Traditional Values Coalition, and Focus on the Family, have presented a long list of societal ills that upset God and his chosen ones on earth: abortion, taking prayer out of school, taking the Ten Commandments out of school, teaching evolution, taking Bible reading out of school, etc. Like the petulant, violent child stomping their feet and throwing toys when other children won’t play the game by their rules, God is pouring out his wrath and judgment on the United States. Or so we are told. 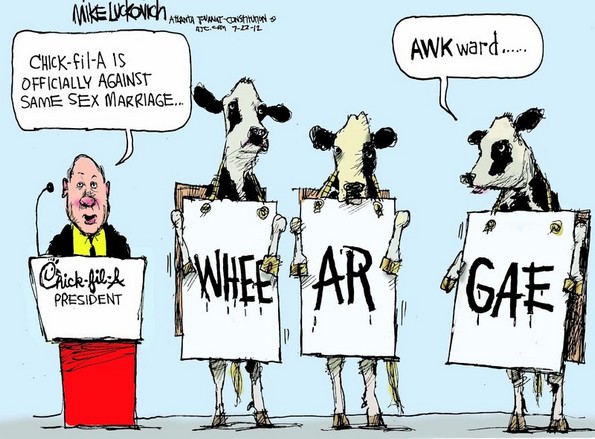 …This brings us to what the Supreme Court did to Muslims last Friday. The entire world knows exactly how the “religion of peace” deals with homosexuals: they tie them to chairs and throw them off eight story buildings, and then, if they survive the fall, stone them to death.

In fact, on Friday, the very day the Supreme Court handed down its abominable gay marriage ruling, ISIS threw four homosexuals off the roof of an apartment building, perhaps to stick a thumb in the eye of the United States.

The Muslim world justifies its attacks on the United States because they believe, not inaccurately, that we are the chief exporter of wickedness and decadence in the world. That’s why they call us the Great Satan. When we insult their god, their religion, their prophet, or their values they claim a divine sanction to punish us for our transgressions…

…But wait. The Supreme Court insulted and offended the entire Muslim world last Friday by celebrating and gushing over a sin that Muslims regard as so offensive to Allah that practitioners must be hurled to their death. (By the way, the great difference between Christians and Muslims with regard to homosexuals is that we want them healed while Muslims want them dead.)

The Supreme Court, perhaps unwittingly and carelessly, just gave the Muslim world another reason to attack us. And a terrorist attack appears imminent, perhaps even planned for this weekend. The FBI has set up command posts all over the country and is taking the threat so seriously that 4th of July leave has been canceled for every single agent.

If Muslims attack us, and refer in any way to our celebration of homosexuality as part of the reason, then according to liberals culpability must be laid at the feet of the Supreme Court.

So, the next time there is a terrorist attack on U.S. soil, and there will be a next time, it’s all because of the Supreme Court legalized same-sex marriage. No matter what ills befalls us, it will be blamed on, by Pastor Nutter, Sister Ignor and Brother Amus, the legalization of same-sex marriage.

This kind of thinking is the direct result of too much exposure to Fox News, Worldnet Daily, and the Sunday morning preaching of conspiracy nuts. Once entropy starts there is little that can be done to stop it. Brain cell after brain cell dies until all that is left is a mind unable to distinguish between fact and fiction. They become the Walking Dead. 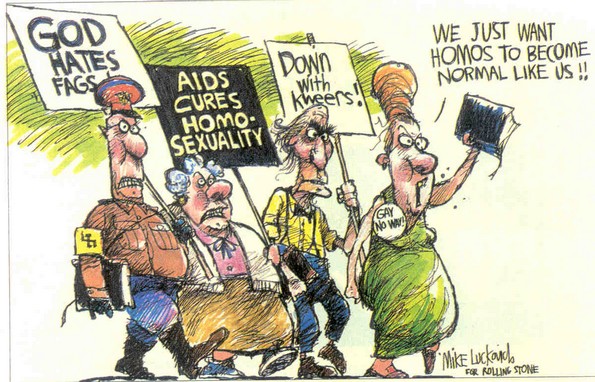