A Late Night Existential Experience with An Asian Beetle 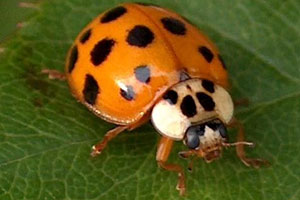 It’s late. I can’t sleep, so I’m laying in bed reading the latest issue of Astronomy Magazine. I need a drink of water, so I lean over to grab the water glass on the nightstand, and there, swimming in the water of my glass, is an Asian Beetle. (Harmonia axyridis) Those of us who live in the Midwest know all about Asian beetles. We have a contract out on the biologist who introduced this non-native invasive insect to our land. Every winter they do their best to survive until spring so they can reproduce. They hide in the nooks and crannies of, well, everything. Some people have such an infestation in their homes that they spend all winter killing them. Anyone who has ever done this knows the wonderful smell Asian beetles give off when flicked, smacked, or sucked up with a vacuum. They are very hard to kill, and even insecticides are often no match for their determination to live.

So when I found this Asian Beetle swimming for its dear life in my water glass my first thought was, Good riddance. Die!  I even tried to help the beetle die. Next to the water glass was a cardboard box which I recently emptied of its contents, a new prescription of Flonase. I took the rectangular box and pushed down on top of the Asian Beetle, hoping it would drown. I did this several times, but the beetle refused to die. And then  I stopped…

I began to admire the Asian Beetle’s fight to survive; its desire to make it to spring so it could procreate. For a moment I pondered the wonders of Evolution and Darwin’s theories, all in full display in the water glass on my nightstand. Then in a moment of irrationality, I put the Flonase box back in the water in such a way that the Asian Beetle could climb out of the water. In a few moments he did. I continued to watch him as he climbed higher and higher to get away from the water. The struggle to survive was evident.

Come tomorrow, I suspect I will continue my murderous rampage against Asian beetles. But, for a moment, in the stillness of the night, a water glass and an Asian Beetle spoke deeply to me and reminded me of the common existence I have with all living things.