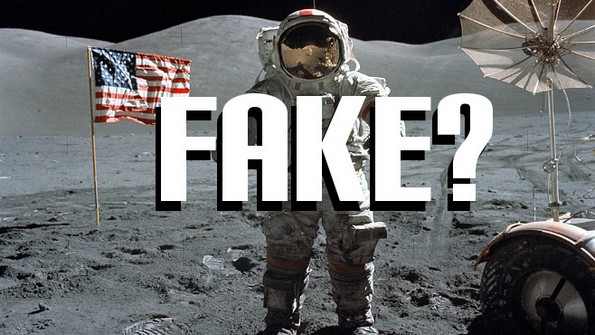 I’m convinced that Bible literalism, creationism, and Evangelical belief, when merged together in the mind of a Christian render them unable to rationally think. Harsh, you say? Let me give readers an example of what I am talking about. Recently, Danny Faulkner, a frequent contributor to Ken Ham’s Answers in Genesis website, wrote a post about the 1969 Apollo 11 moon landing.  While Faulkner was quick to say, yes the moon landing actually happened, his reasons for believing so left a lot to be desired. After giving a historical account of the moon landing, Faulkner ended his post with this:

The Apollo moon landing theory has gained some traction among Christians too. Since so many scientists are wrong about the origin and age of the world, it may be that many Christians assume that the same scientists are wrong about landing on the moon too. Sometimes it seems that scientists want to stamp out any dissent on certain issues, such as evolution. This heavy-handed approach can look a bit conspiratorial, so Christians may be justified in being at least a bit skeptical about many things. How should we respond? It is tempting to give a detailed rebuttal of many of the claims made by those who support the idea that the Apollo moon landings were a hoax. However, that has been done many times already.

There is a much more straightforward approach. Two of the twelve men who walked on the moon later were born again Christians, Charlie Duke, and the late Jim Irwin. Both of these dedicated Christians wrote books in which they shared their testimonies and their experiences as astronauts. To doubt the Apollo moon landings amounts to accusing two Christian brothers of lying about the biggest thing that ever happened to them, of course apart from their salvation. The biblical standard for establishing such a matter is two or three witnesses (Deuteronomy 17:6; Matthew 18:15–17; 2 Corinthians 13:1). These two Christian astronauts certainly suffice as reliable witnesses, so we can be assured that the Apollo astronauts indeed walked on the moon.

Faulkner’s answer for those who understandably doubt the truth of the moon landing is to remind them of moon walkers Jim Irwin (Apollo 15) and Charlie Duke (Apollo 16). Both of these men are born again Christians, and according to Faulkner this means their testimony of what happened on the moon should be accepted without question. Evidently, being a Christian grants a person special powers that enable them to always tell the truth. According to Faulkner, to not believe the testimony of these moon walkers is to say that they are lying, and no Christian should call a brother or sister in the Lord a liar (even though Ken Ham spends considerable time calling all sorts of people liars).

Ken Ham, the CEO of Answers in Genesis, the Creation Museum, and Noah’s Bathtub Adventure, posted Faulkner’s article to his Facebook page. After Ham posted the article, outraged Evangelicals let Ham know what they thought about it:

I respect Ken Ham and his work but I have a hard time believing the moon landings were real based on the word of two christian astronauts. Most of the astronauts were high level Freemasons including Buzz Aldrin and John Glenn and that is a red flag for me as far as credibility goes. Hillary and President Obama also call themselves Christians. So do we believe everything they say also? Sorry, not buying it.

I’m not sure about the moon landing. But hopefully it’s true!

I have always questioned if we did, Glory PTL

When I read these comments, I am so discouraged. No one knows how to make a sound argument. “the landings weren’t faked, cause we are told they weren’t faked and we watched it on TV and my grandfather was in the program and so on and so on… literally no proof. Again, we could have done it, but and null the arguments made are so terrible and have no business being acknowledged but to simply make my point. No one can think anymore. Many are uncomfortable with questioning things of this magnitude. It opens the door for the possibility that many other things could be deceiving them as well. We don’t like feeling deceived, therfore we accept what we are told. Talks of science being compromised in the fields of biology and geology, still thinks astronomy and physics are 100% legit. Revelation states the devil deceives the whole world but Ken doesn’t want to acknowledge an elitist globalized agenda to deceive the whole world… [face palm]

Sorry … One of your Astronauts was a MASON.

How can you land on a light? It is better to trust God than man. Every man is a lier.

The entire world had really been brainwashed the this B.S. moon landIng Matthew 24:24 “For there shall arise false Christs, and false prophets, and shall shew great signs and wonders; insomuch that, if it were possible, they shall deceive the very elect.” The bible is right

It’s so sad that many Christian still believe this greatest lie in human history. They blindly believe anything just because they heard it in the radio and watched in the TV. Just because they read a bible verse doesn’t mean they’re telling the truth. Matthew 7:21 (ASV) Not every one that saith unto me, Lord, Lord, shall enter into the kingdom of heaven; but he that doeth the will of my Father who is in heaven.

I’m not sure which side I take on the issue. As a professional photographer for many many years – photos don’t lie. Let’s not forget, we’re dealing with photography back in its earlier stages… not like we have today. Perfect photos in a harsh lighted realm by amateur photographs – not likely. And that is only a tiny piece of the many problems.

My question is, if we did really go there soooooo many years ago, why haven’t we went to the moon a thousand more times since then? It just doesn’t make any sense…

We never landed on the moon. NASA is a sham. It’s embarrassing anyone still hasn’t looked at the so called evidences, especially if you consider yourself an intellectually honest seeker of truth. What, you mean the stuff NASA puts out who doesn’t allow anyone else to verify their stuff? They are a self verifying agency. Wake up! Look at the many fakes and frauds they put out from photos to videos. Why fake anything at all? Fact is, they faked it all

I love what you do Ken, but it’s kinda disappointing to see AiG supporting this hoax. Getting to the Moon would have been impossible 50 years ago with the technology available, which isn’t even close to what we have now. And there’s a pretty obvious reason for why we haven’t been there a single time since then.

My question is why can’t you see any stars in the background? When we look up from earth you can see a million stars but not from th moon. And who took the pics of the first steps of man on the moon was someone already there waiting?

I have a question. Who took the video of it leaving the moon surface to return home? Saw this as a child and no one could answer that question.

I know we left some junk on the moon when we left.  They know where the Luner landers landed. Can’t we point one of the orbiting telescopes at the moon to locate some of the debris. Or one of the flags we left.

I am ambivalent. They haven’t been to the moon in over 40 years but what did they do on the moon? They are trying to go to Mars but they haven’t done anything with the moon yet. That’s partly why I’m skeptical. The other part is the photos that don’t cast a silhouette with the only light source behind them. Just make me go hmmm.