Book Review: The Sound of a Wild Snail Eating by Elisabeth Tova Bailey 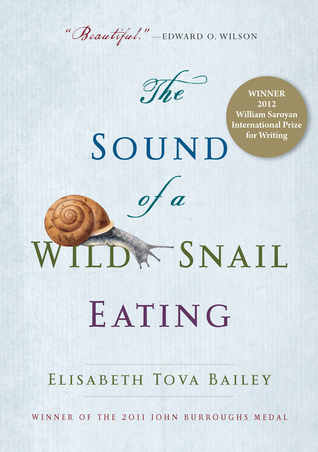 The Sound of a Wild Snail Eating is a delightful tale of Elisabeth Tova Bailey’s interaction with a wild snail. Bailey, afflicted with an illness that keeps her bedfast most of the time, interweaves her story of affliction with that of a wild gastropod. In 189 pages, Bailey succeeds in telling readers everything they will ever need to know about snails. After reading the book I felt as if I had earned an advanced degree in snailology.

One early spring day, a friend of Bailey’s spotted a snail in the woods and decided to take it back to Bailey so she could see it. The friend dug up a few violets, put them in a pot, and delivered it and snail to Bailey, thinking that her invalid friend would enjoy the snail’s company. Bailey thought, at the time:

Why, I wondered,  would I enjoy a snail?  What on earth would I do with it? I  couldn’t get out of bed to return it to the woods. It was not of much interest, and if it were alive, the responsibility—especially for a snail, something so uncalled for—was overwhelming.

Thus begins the relationship of Elisabeth Tova Bailey with a lowly common forest snail. Over the course of a year Bailey details her interaction with the snail. She pays close attention to its habits and what the snail likes to eat. Bailey also details when and how the snail sleeps and how it reproduces (quickly and in great numbers).

If this book was just a science text about snails, I suspect that many readers might bore of all the snail minutia dispensed by Bailey. Personally, I loved the precise details. Such minutia is just the kind of knowledge needed to impress people at a social gathering. Things such as, do you know that snails have teeth? Do you know that snails are hermaphrodites?

I found myself drawn into Bailey’s story, not so much because of the subject, a snail, but because of Bailey’s debilitating illness.

There is a certain depth of illness that is piercing in its isolation; the only rule of existence is uncertainty, and the only movement is the passage of time. One can not bear to live through another loss of function, and sometimes friends and family can not bear to watch. An unspoken, unbridgeable divide may widen. Even if you are still who you were, you cannot actually fully be who you are. Sometimes the people you know well withdraw, and then even the person you know as yourself begins to change.

There were times when I wished that my viral invader had claimed me completely. How much better to live an exuberant life and then leave as one exits a party, simply opening a door and stepping out. Instead, the virus took me to the edge of life and then left me trapped in its pernicious shadow, with symptoms that, barely tolerable one day, become too severe the next, and with the unjustness of unexpected relapses, that, overnight, erased years of gradual improvement.

I wept as I read this passage. It resonated deeply with me; as a fellow pilgrim on the road of debility I understood the cry of Bailey’s being. The remembrance of what once was. The lament over what has been lost. Sometimes, it is a simple thing, like a snail, that comes along to give us a bit of purpose and meaning; to remind us that life is still worth living.

I heartily recommend The Sound of a Wild Snail Eating.