Bart Ehrman on God, the Bible, and the Problem of Suffering 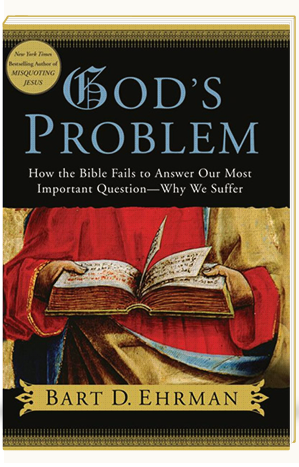 What follows is an excerpt from a recent post Dr. Bart Ehrman wrote about a 2008 interview on the subject of  the Bible, God, and suffering. This interview occurred around the time Ehrman released God’s Problem: How the Bible Fails to Answer Our Most Important Question — Why We Suffer. Ehrman wrote:

For most of my life I was a devout Christian, believing in God, trusting in Christ for salvation, knowing that God was actively involved in this world. During my young adulthood, I was an evangelical, with a firm belief in the Bible as the inspired and inerrant word of God. During those years I had fairly simple but commonly held views about how there can be so much pain and misery in the world. God had given us free will (we weren’t programmed like robots), but since we were free to do good we were also free to do evil—hence the Holocaust, the genocide in Cambodia, and so on. To be sure, this view did not explain all evil in the world, but a good deal of suffering was a mystery and in the end, God would make right all that was wrong.

In my mid 20s, I left the evangelical fold, but I remained a Christian for some twenty years—a God-believing, sin-confessing, church-going Christian, who no longer held to the inerrancy of Scripture but who did believe that the Bible contained God’s word, trustworthy as the source for theological reflection. And the more I studied the Christian tradition, first as a graduate student in seminary and then as a young scholar teaching biblical studies at universities, the more sophisticated I became in my theological views and in my understanding of the world and our place in it.

Suffering increasingly became a problem for me and my faith. How can one explain all the pain and misery in the world if God—the creator and redeemer of all—is sovereign over it, exercising his will both on the grand scheme and in the daily workings of our lives? Why, I asked, is there such rampant starvation in the world? Why are there droughts, epidemics, hurricanes, and earthquakes? If God answers prayer, why didn’t he answer the prayers of the faithful Jews during the Holocaust? Or of the faithful Christians who also suffered torment and death at the hands of the Nazis? If God is concerned to answer my little prayers about my daily life, why didn’t he answer my and others’ big prayers when millions were being slaughtered by the Khmer Rouge in Cambodia, when a mudslide killed 30,000 Columbians in their sleep, in a matter of minutes, when disasters of all kinds caused by humans and by nature happened in the world?

About nine or ten years ago I came to realize that I simply no longer believed the Christian message. A large part of my movement away from the faith was driven by my concern for suffering. I simply no longer could hold to the view—which I took to be essential to Christian faith—that God was active in the world, that he answered prayer, that he intervened on behalf of his faithful, that he brought salvation in the past and that in the future, eventually in the coming eschaton, he would set to rights all that was wrong, that he would vindicate his name and his people and bring in a good kingdom (either at our deaths or here on earth in a future utopian existence).

We live in a world in which a child dies every five seconds of starvation. Every five seconds. Every minute there are twenty-five people who die because they do not have clean water to drink. Every hour 700 people die of malaria. Where is God in all this? We live in a world in which earthquakes in the Himalayas kill 50,000 people and leave 3 million without shelter in the face of oncoming winter. We live in a world where a hurricane destroys New Orleans. Where a tsunami kills 300,000 people in one fell swoop. Where millions of children are born with horrible birth defects. And where is God? To say that he eventually will make right all that is wrong seems to me, now, to be pure wishful thinking.

As it turns out, my various wrestlings with the problem have led me, even as an agnostic, back to the Bible, to see how different biblical authors wrestle with this, the greatest of all human questions. The result is my recent book, God’s Problem: How the Bible Fails to Answer Our Most Important Question–Why We Suffer. My contention is that many of the authors of the Bible are wrestling with just this question: why do people (especially the people of God) suffer? The biblical answers are striking at times for their simplicity and power (suffering comes as a punishment from God for sin; suffering is a test of faith; suffering is created by cosmic powers aligned against God and his people; suffering is a huge mystery and we have no right to question why it happens; suffering is redemptive and is the means by which God brings salvation; and so on). Some of these answers are at odds with one another (is it God or his cosmic enemies who are creating havoc on earth?), yet many of them continue to inform religious thinkers today….

Here is a one hour video of the interview. If you are unfamiliar with Dr. Ehrman, I encourage you to watch the video.

I heartily recommend Ehrman’s book, God’s Problem: How the Bible Fails to Answer Our Most Important Question — Why We Suffer. You can purchase it here.

Ehrman has a member-only blog, with an annual $24.95 membership fee (all monies raised go to charitable groups).

Other books written by Ehrman can be purchased here. Ehrman’s latest book, Jesus Before the Gospels: How the Earliest Christians Remembered, Changed, and Invented Their Stories of the Savior, is scheduled to be released on March 6, 2016. You can pre-order the book here.