The Johnson Amendment: I Agree With Donald Trump 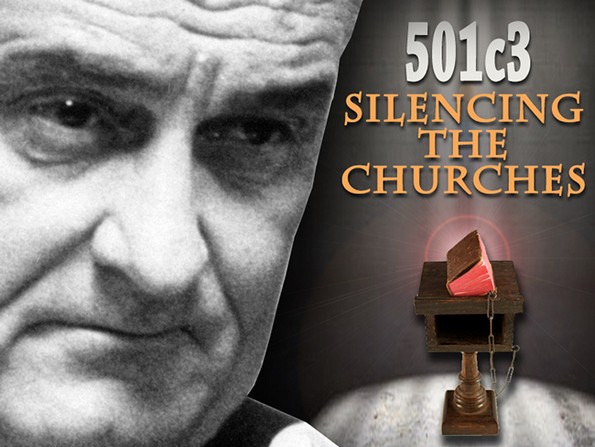 In the 1950s, thanks to men such as there’s-a-red-under-every-bed Catholic Congressman Joseph McCarthy, American Christianity’s God found a home in the Pledge of Allegiance and on the back of our paper money. Under God was added to the Pledge (1954) and In God we Trust was added to American paper currency (1957). In 1957, President Dwight Eisenhower signed a bill into law that stated the national motto was In God we Trust. These blatantly unconstitutional acts are still with us today. In 1954, then-Senator Lyndon B. Johnson proposed an amendment to U.S. tax code that would forbid churches and other non-profit, tax exempt institutions (501(c)(3)) from endorsing and campaigning for political candidates. This amendment is currently part of the tax code.

Under the Internal Revenue Code, all section 501(c)(3) organizations are absolutely prohibited from directly or indirectly participating in, or intervening in, any political campaign on behalf of (or in opposition to) any candidate for elective public office. Contributions to political campaign funds or public statements of position (verbal or written) made on behalf of the organization in favor of or in opposition to any candidate for public office clearly violate the prohibition against political campaign activity. Violating this prohibition may result in denial or revocation of tax-exempt status and the imposition of certain taxes.

Certain activities or expenditures may not be prohibited depending on the facts and circumstances. For example, certain voter education activities (including presenting public forums and publishing voter education guides) conducted in a non-partisan manner do not constitute prohibited political campaign activity. In addition, other activities intended to encourage people to participate in the electoral process, such as voter registration and get-out-the-vote drives, would not be prohibited political campaign activity if conducted in a non-partisan manner.

On the other hand, voter education or registration activities with evidence of bias that (a) would favor one candidate over another; (b) oppose a candidate in some manner; or (c) have the effect of favoring a candidate or group of candidates, will constitute prohibited participation or intervention.

In recent days, Republican Presidential Candidate Donald Trump has said that, if elected, he would work to repeal the Johnson Amendment. I agree. I hope Congress will remove this amendment from the U.S. Tax Code. I also hope they will strip from the tax code the clergy housing allowance and any/all preferences churches and religious institutions currently receive. It is time for poor, helpless churches and their pastors to be cast out into the world to live by the same rules and laws that govern other businesses. Yes, other businesses, because churches are, above all else, profit-driven businesses. The charitable, public service parts of what churches do is minuscule. Churches exist, for the most part, to serve their customers — members and prospective members. If churches wish to remain tax-exempt, then the bulk of their income should be spent on charitable works. As it stands now, churches spend most of their money on buildings, salaries, benefits, and programs that only serve congregants.

If, as Donald Trump and many Evangelicals/Catholics want, the Johnson Amendment is overturned, churches and religious institutions should then be required to file business income tax returns and govern themselves according to current business law. This means churches and religious groups should also be required to pay sales tax, real estate tax, and every other tax businesses pay. Imagine the trillions of dollars that will make its way into local, state, and federal government coffers.

Churches and pastors should be careful about what they wish for. If churches are required to play by the same rules as businesses, I suspect that there would be a lot of church bankruptcies and mergers. Good news, to be sure, for those of us who are tired of churches receiving unconstitutional favoritism and financial support via tax exemptions, tuition payments, reduced postage charges, and other tax benefits that are only available to churches and religious institutions. But, bad news for those few churches and pastors who really do care about the social welfare of others.

Churches have always been permitted to support ballot initiatives and issues.

Pastors, outside of their official capacity, are free to endorse candidates. Unfortunately, this line has become blurred, and an increasing number of pastors and parachurch leaders now think they can endorse candidates without restriction. Realizing that they are breaking the law, these so-called men of God often add to their pronouncements, I say this as an individual, not in my official capacity as a pastor. And then they smile and wink.