The Sounds of Fundamentalism: No Hell, but I Warn Ya by Parody Queen 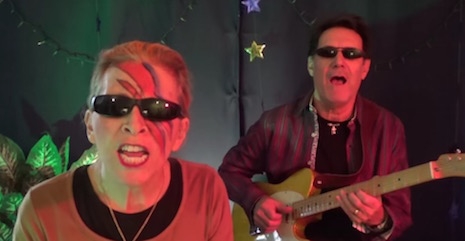 This is the ninety-seventh installment in The Sounds of Fundamentalism series. This is a series that I would like readers to help me with. If you know of a video clip that shows the crazy, cantankerous, or contradictory side of Evangelical Christianity, please send me an email with the name or link to the video. Please do not leave suggestions in the comment section.  Let’s have some fun!

Today’s Sound of Fundamentalism is a video clip of a woman named Parody Queen singing an awful parody of Hotel California. No Hell, but I Warn Ya is one of The Parody Queen’s attempts to put Christian lyrics to popular secular songs. This is how Parody Queen describes her music on her website:

In case you’re wondering, my forte’ is writing parodies — putting my original (usually Christian based) lyrics to existing popular music.  I believe in taking back the music for God’s kingdom, and what better way than using already familiar tunes. Kind of like a Christian Weird Al Yankovic.