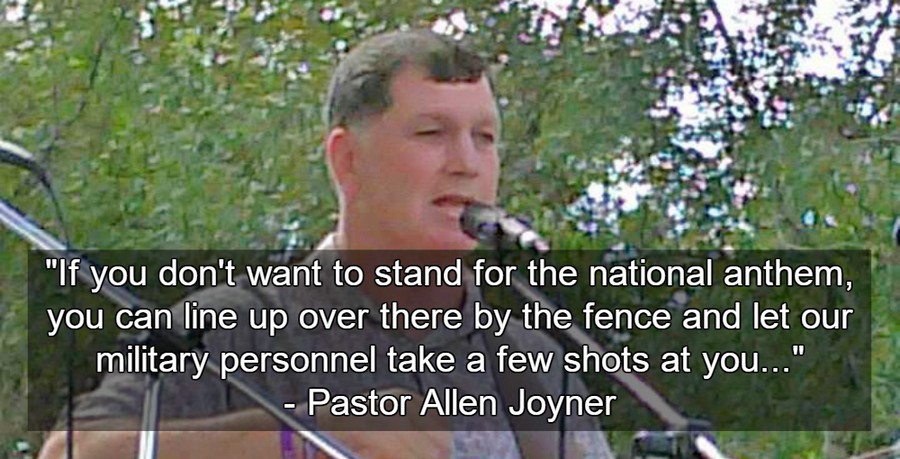 Allen Joyner is the pastor of Sweet Home Baptist Church in McKenzie, Alabama. Joyner is also the football game announcer for McKenzie High School. Prior to the start of yesterday’s game, Joyner told the crowd:

“If you don’t want to stand for the National Anthem, you can line up over there by the fence and let our military personnel take a few shots AT you since they’re taking shots FOR you.”

Evidently, Joyner thought that he was preaching to his church. You know, typical red meat Fundamentalist bullshit that countless Baptist preachers routinely utter on Sundays. Now, thanks to someone posting his words to Facebook, Joyner is facing widespread ridicule and condemnation. And rightly so. Here’s what was posted on Facebook by Denise Crowley-Whitfield: 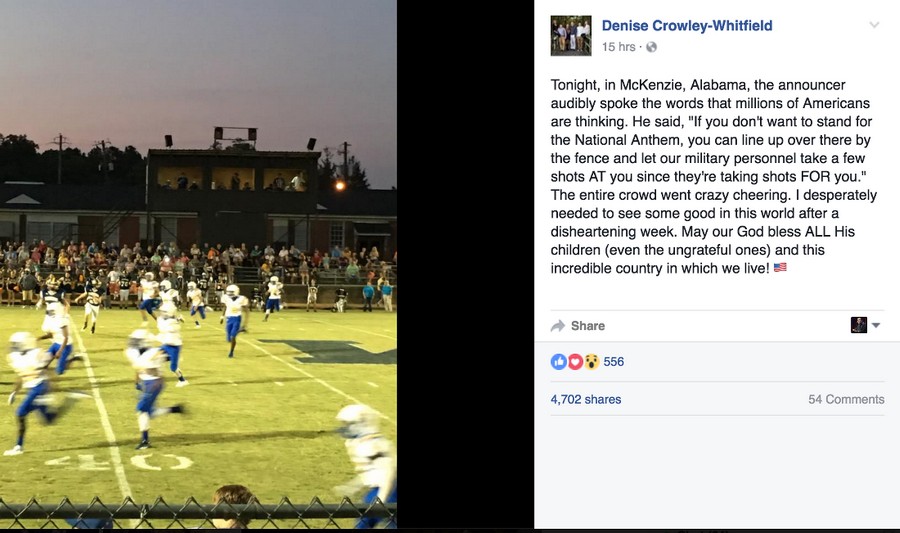 The crowd wildly cheered. So sad that the people cheering Joyner’s ignorance seem to have no understanding of the First Amendment, nor do they understand that there is a time and place for everything. By all means, Pastor Joyner, unzip your pants and show your congregation your “patriotic” manliness. Let them cheer your prowess and “conviction.” But, on fall Fridays your job is to announce McKenzie High football games. Save the patriotic junk-waving for Sunday. 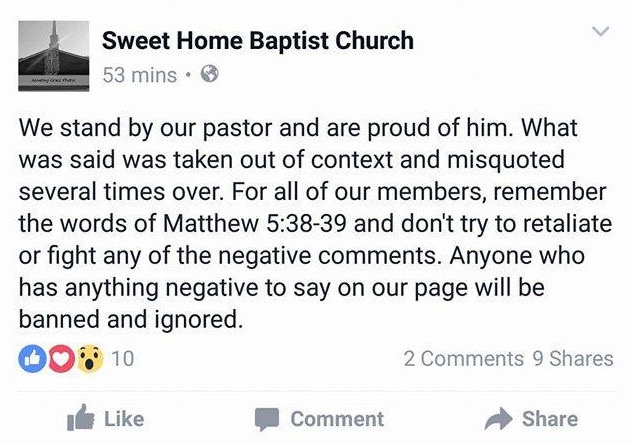 Joyner’s words were taken out of context? Sure, they were. Pray tell, in what other way could Joyner’s words be understood?  No, Joyner meant what he said, and now he is upset because he has been accused of indecent exposure.

Both Sweet Home Baptist and Crowley-Whitfield have deactivated their Facebook accounts. While the folks at Sweet Home are standing by Pastor Joyner’s words, I hope that the powers that be at McKenzie High School will make sure that Joyner had announced his last football game.

“Patriotism should be a part of school events but threats of shooting people who aren’t patriotic, even in jest, have no place at a school. Threats of violence are a violation of school policy and certainly not condoned by the school board.”

I suspect that Joyner’s words and his continued employment will be subjects of discussion at the next school board meeting.

In the coming days, countless right-wingers will defend Joyner, even going so far as to say that Joyner has the right to say whatever he wants while announcing McKenzie High football games. While this may or may not be true, one thing is for sure: words have consequences. What Pastor Joyner SHOULD do is apologize for what he said, but he won’t. His pants and underwear are now down around his knees. No turning back now.