Why I Stand With Colin Kaepernick 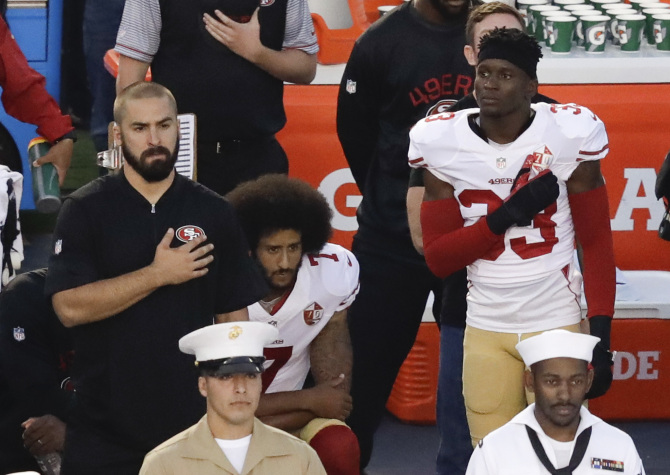 By now, I am sure that virtually every reader of this blog knows about and has an opinion concerning San Francisco 49ers quarterback Colin Kaepernick’s refusal to stand during the playing of the national anthem. Kaepernick has been praised and brutalized in the press. I have been hesitant to give my opinion on the matter, fearing how some people might respond to my position. When it comes to the US military, law enforcement, the national anthem, the Pledge of Allegiance, and political/social movements such as Black Lives Matter, most Americans have strong positive or negative feelings. I too have strong feelings.

First, I fully support Colin Kaepernick. He has a First Amendment right to protest, speak his mind, and refuse to swear allegiance to the flag of a country that he believes directly and indirectly supports the oppression of people of color. All Americans have the right to voice their dissent, and I applaud Kaepernick for his willingness to voice his on a national stage.

Second, while there is some debate about the legality of Kaepernick’s unwillingness to honor the American flag, whatever laws might be on the books, the US Supreme Court has made it clear in its ruling on the constitutionality of burning the American flag that acts of dissent and civil disobedience are protected First Amendment behaviors. I’m astounded by the fact that many supposedly educated people think Kaepernick should be publicly and privately punished for his dissent. The moment we stifle or outlaw dissent is the moment when we cease to be a nation that values freedom and liberty.

Now let me state very clearly how I personally view these matters. I realize that some readers will be incensed by some of the things I say in this post. That’s fine. People are free to voice disagreement or even be angry or hateful towards my viewpoint. All I can do is live according to the dictates of my conscience.

While I understand the need for a military, it troubles me deeply that the US military has been used to promote colonialism, imperialism, and American exceptionalism across the globe. I find it beyond offensive that American troops (along with the CIA and NSA) have been used to overthrow democratically elected governments, wage wars against political enemies, and expand the iron grip of American capitalism. American soldiers since 9/11 are directly responsible for the slaughter of innocent men, women, and children. This coming year I will be 60 years old. The United States has been at war somewhere in the world my entire life. We now rain unholy hell from the skies through a drone program that supposedly kills only the bad guys. We now know drone strikes do indeed kill terrorists, but they also cause what our political and military leaders like to call “collateral damage.” I wonder what we would think of the term “collateral damage” if it were our children, our wives, our parents, our grandparents, and our siblings that were being slaughtered with bombs shot from machines that are controlled by soldiers thousands of miles away?

Yesterday, President Obama authorized spending of $90 million for the use of eliminating 40-year-old bombs that were dropped in Laos during the Vietnam War. Thousands of Laotian people have been killed because they accidentally stumbled upon American bombs. These bombs are a perfect reminder of the senselessness of war and our inability to find ways to settle differences without the use of violence. The United States remains the only nation on the face of the earth to have used nuclear weapons against civilian populations. Instead of realizing the danger of nuclear weapons and working towards total disarmament, the American government is now working on improving its nuclear arsenal. Is there no end in sight to such madness? Fifty years ago a Trappist monk by the name of Thomas Merton said the world was on the precipice of a nuclear holocaust. Nothing has happened in the intervening years that has changed this fact. The doomsday clock continues to tick. Which nation will it be that pushes the red button and obliterates the human race off the face of the earth? Naïve Americans like to think it will never be the United States, but history tells us that our leaders have been quite willing to slaughter vast numbers of people for political and economic gain. It’s time we stop living the lie, the one that we were taught in school, that Americans are basically good people. We’re not, and quite frankly we never have been. Only by ignoring our history can Americans look in the mirror and see themselves as a good people. Maybe there was a time when we had good intentions, but those days are long gone. Naked ambition and a thirst for political power and economic supremacy is now the engine that drives our political class. Unwilling to die themselves, our overlords use US military power to advance their agenda.

It sickens me every time I hear someone say — usually before the playing of the national anthem — that American soldiers are dying overseas so we can enjoy the freedoms we have here. Let me be blunt. This is bullshit. Our invasions of Iraq (both times) and Afghanistan, along with our military interventions in numerous countries across the globe have become the fuel that fires the hatred terrorists have for America. While I think the teachings of the Quran play a significant part in the bloodthirsty actions of Islamic terrorists, I refuse to turn a blind eye to the fact that the country of my birth is somewhat culpable for the rise of ISIS, Al Qaeda, and other terrorist organizations. The US military has killed countless civilians and used torture against combatants and noncombatants alike. Almost 8 years after President Barack Obama said he would close Guantánamo Bay, it remains open, an ever-present reminder of America’s use of torture and violence to advance its agenda.

I refuse to be cowed by demands that I blindly and without reservation support the US military. I do not support military interventionism, expansionism, or offensive wars. The US military should be used for defensive purposes only. So when someone tells me that US soldiers are fighting on my behalf, I say, not in my name! Not in my name! I have never asked soldiers to shed their blood or remain in some foreign land just so I can have the freedom to pursue the delusional American dream. I do not want one more person to die a meaningless, senseless death in wars that cannot be won. This does not mean that I am anti-military. It does mean, however, that I am anti-violence. When the Huns are at the gate, it’s time to fight. When Muslims are fighting against each other in the Middle East over whose religious beliefs are the right ones, the fight is theirs not ours.

I attend numerous sporting events each year, and I can’t remember the last time when the playing and singing the Star-Spangled Banner was not directly connected to American militarism. Wounded American soldiers are displayed for all to see as the national anthem is sung — supposedly as reminders of why we are singing the song. Sporting venues roll out huge flags that are manned by military personnel. Sometimes military jets fly overhead, reminding attendees that the United States is the meanest, baddest, and most powerful nation on the face of the earth. While the crowd claps and chants USA! USA! USA!, I quietly hang my head, waiting for the nationalistic masturbation to end. While I still stand, remove my hat, and even sing the Star-Spangled Banner, I do so not out of loyalty or respect, but because I am still grateful that I live in a land that affords me great liberty, freedom, and economic security.

I draw the line, however, on the Pledge of Allegiance. I refuse to pledge my allegiance to a country that plays an instrumental part in much that is wrong in the world. I am in no way saying that I want to live in some other country, but I’m also not willing to say that the United States is the single best country on the face of the earth. I refuse to pledge my allegiance to a God that does not exist or to a political and economic structure that now causes great harm not only to its citizens, but  the world.  As I do with public prayers and the singing of God Bless America, I refuse to participate when called on to swear my allegiance to the government bought and paid for by Wall Street. While I certainly plan to vote in November, I do so because I fear what a Donald Trump presidency might do to America. That a narcissistic psychopath could even be on the ballot tells me that our political system is broken. Bernie Sanders is right. We need a political revolution. Hillary Clinton is not the answer. She is a centrist corporate Democrat, who will have no problem continuing to use the military to advance America’s worldwide agenda and dominance. She is, sadly, more of the same.

On my more pessimistic days (this is not one of them) I think that our Republic is too far gone to be saved. We no longer have a representative form of government. An oligarchy controls the political process and the economy. Corporate influence and money has destroyed Congress’ ability to act in the best interest of the American people. Our political leaders are little more than whores and shills for whoever shoves the most money in their g-strings. Until lobbyists are run out of Washington DC, “he who has the most money” will win, thereby controlling the government. This is not a Republican/Democrat problem. It is systemic, and until we are willing to destroy the system, things will continue as they now are.  What is needed most today is for tens of millions of Colin Kaepernicks to use their spheres of influence to effect lasting political change. I am willing to be one such person and I hope you are too.