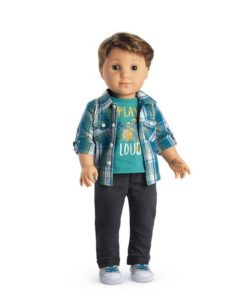 Keith Ogden is the pastor of Hill Street Baptist Church in Asheville, North Carolina. Recently, Ogden expressed his outrage over American Girl’s newest doll. You see, this new doll is a boy, and Ogden thinks “This is nothing more than a trick of the enemy to emasculate little boys and confuse their role to become men.” The Citizen Times reports:

A move by a national doll manufacturer to add the first boy to its lineup has one local minister in a tizzy.

The Rev. Keith Ogden  of Hill Street Baptist Church sent a message to more than 100 of his supporters and parishioners Wednesday titled, “KILLING THE MINDS OF MALE BABIES.”

Ogden invoked Scripture as he criticized the American Girl company for its debut of Logan Everett, a drummer boy doll, who performs alongside Tenney Grant, a girl doll with a flair for country western music.

Logan is the lone boy among American Girl’s vast cast of characters, and the company sees him as both a way to please longtime fans as well as a new addition who will appeal to a broader audience.

“This is nothing more than a trick of the enemy to emasculate little boys and confuse their role to become men,” the minister said in the e-mailed statement he sent at 9:45 a.m. Wednesday after watching a segment about American Girl on “Good Morning America.”

“There are those in this world who want to alter God’s creation of the male and female,” he wrote. “The devil wants to kill, steal and destroy the minds of our children and grandchildren by perverting, distorting and twisting (the) truth of who God created them to be.”

Later that morning Ogden told the Citizen-Times that he doesn’t think that boys should play with dolls, that he thinks American Girl’s move will confuse children.

“Now you are going to have little boys playing with baby dolls and that’s not cool,” he said. “We need to get back to our old values and morals.”

Ogden said churches need to stand up and speak truth to power as the community wrestles with gender identity and changing values, especially as it relates to youth programming and activities. The Boy Scouts of America, last month, for example, announced that it will allow transgender children to enroll in scouting programs.

“A boy character has been a top request from our fans for decades,” said spokeswoman Stephanie Spanos, adding that along with two new historical characters the toy line this year will introduce more dolls with modern story lines than at any time in its 31-year history.

“We’re hopeful Logan will appeal to both girls and boys,” she said. “For boys, we know Logan can speak directly to them and give them something unique and special to call their own.”

The brown-haired, gray-eyed Logan doll is 18 inches tall, and has a set of drums to accompany Tenney.

OMG, what’s next? Finding out that Ken never really loved Barbie because he was gay? Surely, the end of the world is at hand!