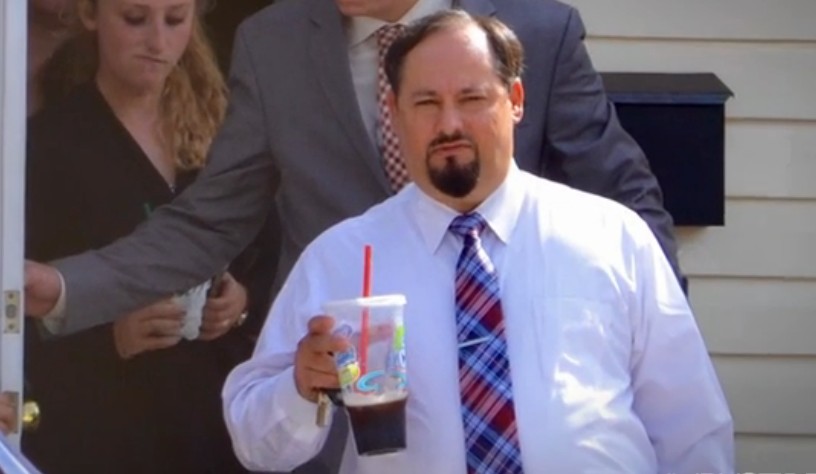 Robert Jaynes Jr., pastor of Irvington Bible Baptist Church in Irvington, Indiana was sentenced last week to eleven and a half years in prison on charges ” related to the manufacture of more than 10 tons of synthetic drugs”  The Indy Star reports:

Once, pastor Robert Jaynes Jr. was a man of many words, shown in videos giving thundering sermons to his small flock at the fundamentalist Irvington Bible Baptist Church.

But it was different last week in federal court, where Judge Rodney W. Sippel sentenced Jaynes on charges related to the manufacture of more than 10 tons of synthetic drugs.

“If there’s anything you’d like to say, now’s the time,” Sippel said.

Later, Jaynes did chime in to say it was hard to have the country he loves as a courtroom adversary: USA vs. Jaynes, a case in which he pleaded guilty to two charges.

Over three hours at the sentencing hearing, a much deeper portrait than previously known emerged of a pastor who made drugs at a volume the judge called “staggering” while luring several members of his church into the scheme, even putting his mother in jeopardy of arrest.

Jaynes was the first to be sentenced out of 23 people charged in a national conspiracy, an operation that included his wife, brother-in-law, two now-former sheriff’s deputies and an Indianapolis Public Schools teacher.

The total income, prosecutors said, was higher but couldn’t be quantified easily.

Judge Sippel stressed the impact Jaynes had on victims whose “lives were disrupted, destroyed, altered.”

While not directly linked to Jaynes, synthetic drug use caused a rise in emergency calls to the Indiana Poison Center. Officials at the center told IndyStar that reports involving synthetic cannabinoids spiked in 2011 and 2012, and two deaths in 2014 were attributed to such drugs.

“The quantity here is staggering,” the judge said of Jaynes’ operation, “so that means the number of people who could come tell us that story is incomprehensible.”

Spice, selling under brands such as Pirates’ Booty, is smoked like marijuana and meant to mimic its effects. Its production, however, isn’t usually precise, meaning the amount of the active ingredient in a package can vary wildly.

One of the charges to which Jaynes pleaded guilty involved mislabeling the drugs, typically sold at mom-and-pop gas stations, head shops and tobacco stores. The drugs are sometimes labeled as “potpourri” or as incense.

Jaynes started in the business by packaging synthetic drugs made by Doug Sloan, with whom Jaynes had worked in the mortgage business, and eventually moved into distributing the finished product to retail outlets.

Jaynes’ lawyer said he got involved with synthetic drugs after filing for bankruptcy and as his son was about to undergo open-heart surgery.

Public records show that Jaynes filed for bankruptcy in 2006. He claimed a monthly income that year of just $528 from his work as a pastor and self-employed courier. That was a dramatic drop from the $91,000 he claimed to have earned.

Prosecutors portrayed Jaynes as a brazen criminal undeterred by the threat of prosecution, even after police shut down manufacturing facilities operated by Sloan and his brother, Greg Sloan, and others in the St. Louis area in 2012.

“At that point anybody would say, ‘What am I dealing with? What am I doing?’” prosecutor James Delworth said. “But instead he goes the opposite way and he becomes the largest supplier for Greg Sloan. You’ve got this continuation and growth even after law enforcement steps in.”

“Hi Greg. This is Rob,” one text from Jaynes said. “Just wanted to check in and see if you guys needed me yet.  I’m still ready to go. I’m broke and trying to find work. If you needed me to come over there and sell my crew to the guys you work with, I’d be glad to. I’d do whatever you thought necessary in order to get work for me and my guys.”

Being broke seemed a dubious claim, prosecutors said. Tax records from the previous two years showed that Tight 30 Entertainment — the company prosecutors said Jaynes used to launder money — had sales of more than $4.5 million. During that time, Jaynes reported personal taxable income of more than $850,000.

Greg Sloan, who has pleaded guilty, soon found even more work for Jaynes, selling to a man in Oklahoma City later in 2012. Jaynes texted Sloan: “That’s great. I’ll take as much as I can get. Maybe if I prove myself with these guys, your guys might decide to give me a shot, too. I’m ready to roll.”

Greg Sloan replied: “These are my guys. Robert Jaynes, I seriously thank you. You are one of the most gracious and kind men I’ve ever met.”

For protection, Jaynes turned to church members Jason and Teresa Woods, a married couple who at the time served as Hendricks County Sheriff’s deputies.  A criminal investigator for the Internal Revenue Service testified that people in Jaynes’ organization knew Jason and Teresa Woods as “the fixers.”

“If anybody got in trouble, that’s who they were supposed to call, if they got stopped by law enforcement,” the IRS investigator said.

When Jaynes moved his operation from New Ross, Indiana, to a home in New Palestine, Jason Woods provided an escort.

“He was out of uniform, but showed up in his squad car,” the IRS investigator. “He met the truck down the street and followed it on two different occasions that day as an escort behind the vehicle to protect it, so nobody could, possibly, could pull the vehicle over during the transportation of all the synthetic drug products in the back of the vehicle.”

Jason and Teresa Woods were initially arrested in December 2014 on charges in Boone County stemming from an investigation into the spice ring. They were suspended from their law enforcement jobs and later fired.

You can read the Indy Star’s in-depth investigation of Jaynes and his drug empire here.