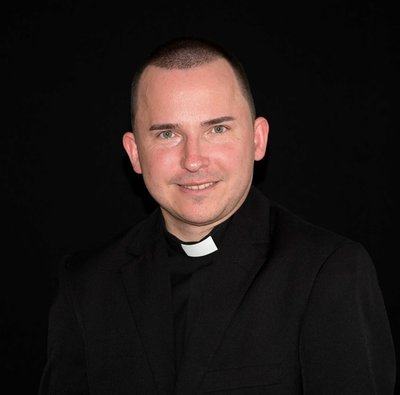 Marcin Nurek, a newly-minted priest that was to scheduled to become the parochial vicar at St. Catherine of Siena Church in Mountain Lakes, New Jersey, was charged with “endangering the welfare of a child – whose age was listed as being at least 13 but younger than 16 – and criminal sexual contact.”

A newly-ordained priest has been charged with putting his hand under a teenager’s skirt in Boonton, touching her buttocks and telling her “You’re sexy,” according to court records.

The Rev. Marcin A. Nurek, 37, was ordained a priest on July 1 and was supposed to start a post as parochial vicar this month at St. Catherine of Siena Church in Mountain Lakes. That assignment will not take place and Nurek has been placed on administrative leave and cannot function as a priest, said Richard Sokerka, director of communications for the Diocese of Paterson.

The alleged incident occurred in the town of Boonton last Thursday, when Nurek put his hand under the girl’s skirt and touched her buttocks over her underwear.  Court records did not state where the incident allegedly occurred but said the teen was upset but not injured.

Nurek was charged with endangering the welfare of a child – whose age was listed as being at least 13 but younger than 16 – and criminal sexual contact. Via a closed-circuit television link between the Morris County jail and Superior Court, Nurek appeared on Friday for an initial review before Judge Ira Cohen.

Morris County Assistant Prosecutor Meg Rodriguez said the state has filed a motion to detain Nurek in the county jail until the charges are resolved. A detention hearing has been scheduled for Wednesday.

Nurek, an immigrant of Poland, was assisted during the hearing by a Polish interpreter. Nurek’s status as a priest was not mentioned at the hearing but other court records and documents confirmed his ordination.

The Diocese issued a statement, saying it is saddened by the incident and is cooperating fully with the Prosecutor’s Office. It also said that Nurek had completed all training related to proper conduct with children.

“The Diocese of Paterson was informed of the arrest of Rev. Marcin Nurek at approximately 8:45 p.m. on Thursday, August 3, 2017, at which time the Morris County Prosecutor’s Office was immediately notified. Since then, the Diocese has cooperated fully with the Prosecutor’s Office in its investigation,” the statement said.

“In addition, Rev. Nurek was immediately placed on administrative leave, his faculties were revoked and his assignment as parochial vicar at St. Catherine of Siena Church, Mountain Lakes, was concluded,” the statement said. (Revocation of faculties means that Nurek cannot function as a priest).

“Rev. Nurek arrived in the United States from Poland in March of 2015. He was just recently ordained to the priesthood on July 1, 2017. He was scheduled to begin his assignment at St. Catherine of Siena in August 2017. His international criminal history background check was completed on Oct. 17, 2014 and was clear. He completed the Diocese’s Protecting God’s Children educational program on April 9, 2015 and he signed the Diocesan Code of Pastoral Conduct on March 9, 2015,” the statement said.