Quote of the Day: What the U.S. Supreme Court Says About Not Standing for the National Anthem 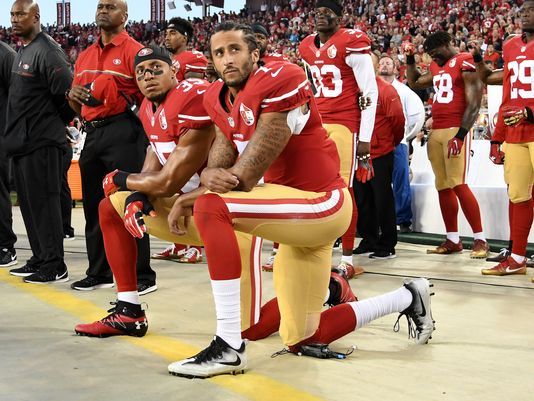 But we know there’s always going to be a trickle-down effect [from his tweets about NFL players refusing to stand for the National Anthem] with Trump – and indeed, now students are paying the price. Within the last two weeks, a high school football coach in Tennessee told his players they have to stand for the national anthem, a Louisiana principal threatened to remove student athletes from their teams if they didn’t stand during the national anthem and the superintendent of the entire parish, who supervises almost three dozen schools, then said he supported this policy and suggested it would apply to all of his schools.

Before more students’ rights are threatened, this needs to stop. Not only does it go against basic American principles to threaten students about speaking up – it’s also blatantly unconstitutional for a public school to do this. The Supreme Court made this clear in 1943 when it decided the landmark case of West Virginia State Board of Education v. Barnette. In that case, school children who were Jehovah’s Witnesses refused to salute the flag because it was against their religion to do so, and as a result they were expelled or threatened with expulsion.

The Supreme Court very forcefully declared that punishing students for not participating in the Pledge of Allegiance was unconstitutional. The decision had nothing to do with the students’ religion and everything to do with their constitutional right to freedom of speech. As the Court wrote, in language that has become one of the most important principles of modern free speech law:

“If there is any fixed star in our constitutional constellation, it is that no official, high or petty, can prescribe what shall be orthodox in politics, nationalism, religion, or other matters of opinion, or force citizens to confess by word or act their faith therein. If there are any circumstances which permit an exception, they do not now occur to us.”

Whether for students in homeroom being forced to stand for the Pledge of Allegiance, or student athletes being forced to stand for the national anthem, the principle remains the same: Public schools cannot force them to participate. As is clear at the end of the above quote, there are no exceptions. (Private schools are different, as the Constitution doesn’t apply to them.)

Other parts of the opinion are worth noting as well. The Court did not ignore the fact that the pledge incites deep emotions, especially during wartime (when the case was decided). To the justices, that just meant that the students’ free speech rights mattered even more: “Freedom to differ is not limited to things that do not matter much. That would be a mere shadow of freedom. The test of its substance is the right to differ as to things that touch the heart of the existing order.”

The Court also explained that true patriots welcome dissent and protest, even when it touches the flag. To the Court, true patriots recognize that the U.S. is strong enough to appeal to people on its own, without mandates from above: “To believe that patriotism will not flourish if patriotic ceremonies are voluntary and spontaneous, instead of a compulsory routine, is to make an unflattering estimate of the appeal of our institutions to free minds.”

Often in the law, especially constitutional law, rules are unclear and there is a lot of wiggle room. That’s what makes my day job teaching these issues interesting. But here, the answer is stunningly simple. Public schools cannot force students to participate in the flag salute or national anthem. Schools doing so in the wake of the current national conversation about NFL players are inviting an expensive lawsuit, a lawsuit they will lose.