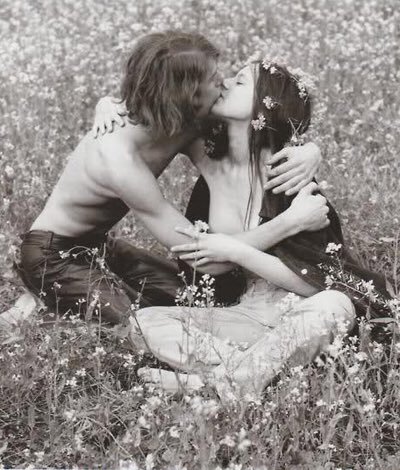 According to Ben Godwin, Baby Boomers — the free love generation — are to blame for rampant sexual immorality and sexual harassment. Evidently, by having sex before marriage in the 1960s and 1970s, we set into motion a societal revolution that has led to widespread fucking without the benefit of marriage. Worse yet, according to Godwin, Baby Boomers are to blame for — perish the thought — LGBTQ people having sex too.

Sadly, the sexual revolution of the 60s and 70s is still producing rotten fruit. Generations with no moral compass or restraint have sown to the wind and now we are reaping the whirlwind (Hos. 8:7). Many who have sown their wild oats are praying for crop failure, but an inescapable law is set in motion—”Be not deceived. God is not mocked. For whatever a man sows, that will he also reap. For the one who sows to his own flesh will from the flesh reap corruption, but the one who sows to the Spirit will from the Spirit reap eternal life” (Gal. 6:7-8). Hollywood is partly to blame for this tsunami of immorality. The entertainment industry vomits a steady stream of sexually graphic TV shows and movies that portray women as sex objects. Pornography flows like an open sewer on the internet, and we wonder why sexual assaults and date rape are rampant on college campuses and in society. What do we expect? We, as a nation, have rejected God’s Word, which provides proper boundaries for sexual conduct. We now live in an “anything goes” society.

The Bible is crystal-clear about sexual behavior—”Marriage is honorable among everyone, and the bed undefiled. But God will judge the sexually immoral and adulterers” (Heb. 13:4). “For this is the will of God, your sanctification: that you should abstain from sexual immorality” (1 Thess. 4:3). It is inappropriate to touch anyone in a sexual way except your legal spouse. Though our sick society says otherwise, adultery, fornication, incest, homosexuality, rape, prostitution, pornography and pedophilia are all still forbidden (Lev. 18:6-26, 19:29; Deut. 22:25; Matt. 5:27-28; Eph. 5:3). Sex, like a fireplace, is a wonderful benefit to enjoy in its proper setting, but if the flames get outside the hearth, they will burn your house down.

There’s an intriguing account of sexual harassment in Genesis, but it’s opposite of the usual way. Instead of a man pushing for sex, it was a woman. Potiphar’s sensual wife held all the cards in this scenario. (While men have taken most of the hits in the media lately, reports abound of male and female leaders alike who abuse their positions and seduce their subordinates.) After Potiphar promoted Joseph from a slave to the steward of his household, his wife “began to look at him lustfully. ‘Come and sleep with me,’ she demanded” (Gen. 39:7, NLT). Genesis 39:10 indicates that this was not a one-time occasion, but she tried to entice Joseph daily. When he repeatedly rebuffed her advances, she falsely accused him of rape and had him arrested. Later, God exonerated and exalted him from the prison to the palace due to his integrity. Joseph never compromised even in the face of torrid temptation; a lesson for us all.

Sexual harassment of women has been front page news in recent months, and Godwin blames Baby Boomers for that too. If we had just stuck to smoking marijuana, racing muscle cars, and listening to the White Album, why who knows how much better the good, old U.S. of A. would be. But no, Baby Boomers wouldn’t keep their bell-bottom jeans zipped up, nor could they keep from tossing their mini-skirts aside for late night sexual romps in the back seat of cars.

Here’s why the good pastor is full of shit. While it is certainly true that Baby Boomers did their fair share of screwing around, so did previous generations. As long as teens and young adults have raging hormones, sexual intercourse is going to be a normal part of their lives. Surely Godwin is not stupid enough to believe that before the 60s, unmarrieds — be they straight, bi, or gay — were not having premarital sex and were living according to the anti-human sexual dictates of the Christian Bible. The only difference between the 1940s and the 1970s is that birth control was widely available in the 1970s and the free love generation was more willing to talk about their sexual escapades.  And even among youth imprisoned in Fundamentalist churches, there was plenty of fooling around going on.

Typical of Evangelical preachers, Godwin is looking for someone to blame for the decline of American Christianity and Western Civilization.  Who better to blame than the first generation of young adults to openly and defiantly question their parents’ Christian worldview; the first generation to openly challenge pastors and their pronouncements about morality; the first generation to openly wonder whether the Christian God was real. So, from Godwin’s pew, it sure looks like I just proved his point; that Baby Boomers are to blame for what he perceives to be the moral decline of American society. However, what the rock-and-roll generation really did was make it okay to openly question beliefs, values, morality, and ethics. We were no longer willing to sit quietly by while our parents and grandparents told us what to believe. This has led to the increasing secularization of our society and progressive social values, and to perhaps the greatest gift Baby Boomers have given to their children and grandchildren. A new world lies ahead, that is if Baby Boomer Donald Trump doesn’t destroy the world with a nuclear war first.