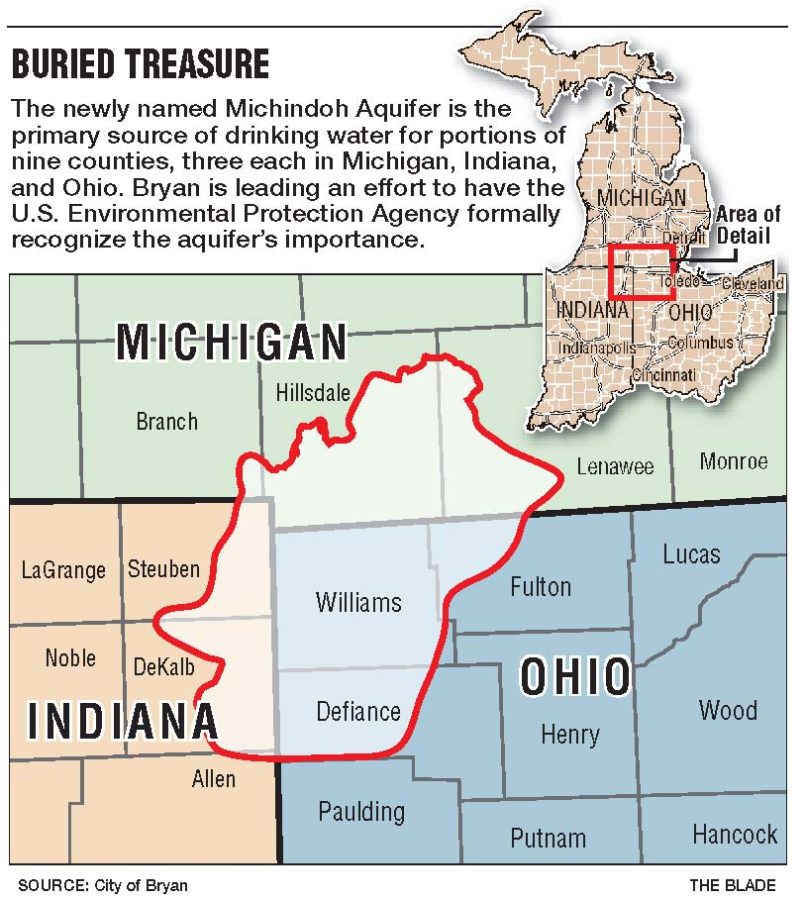 According to an October 5, 2009 KPC news story, the U.S. Environmental Protection Agency — acting on a 2007 petition from the city of Bryan, Ohio — proposed designating the Michindoh Aquifer a sole-source aquifer. A recent news story stated:

Thanks to the U.S. EPA’s suspension of the Michindoh Aquifer’s sole-source designation, there are no federal laws prohibiting outside communities from tapping the Aquifer. 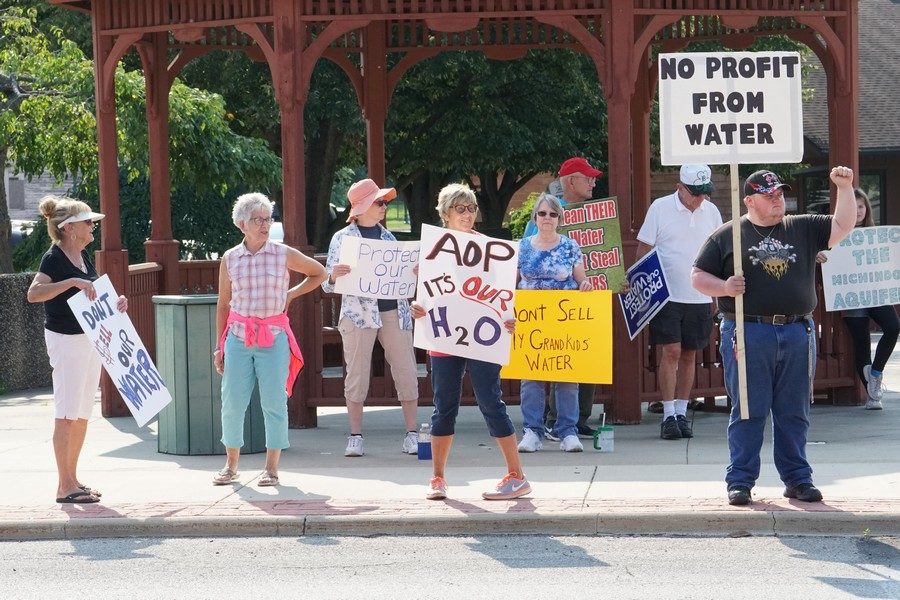 Ed Kidston, the mayor of Pioneer, Ohio and the owner of Artesian of Pioneer, wants to tap the Michindoh Aquifer and sell the water to local communities for drinking purposes. First, Kidston must drill a well to test the feasibility of pumping copious amounts water from the Aquifer.

A July 14, 2018 Toledo Blade report states that Toledo-area communities are looking at the possibility of gaining access to Michindoh Aquifer water:

City councils in Maumee and Sylvania want to explore the possibility of tapping into the aquifer and have agreed to conduct a study. Officials in Perrysburg, Whitehouse, Fulton County, Henry County, and the Northwestern Water & Sewer District also are considering the aquifer as an alternative to Toledo Mayor Wade Kapszukiewicz’s plan to form a regional water commission.

The cost for each entity to perform the study, using a company called Artesian of Pioneer, depends on how many agree to it. The study’s total cost is capped at $35,000.

According to the Toledo Blade, Kidston’s:

… preliminary plans call for a pair of 36-inch pipes to be installed; one along the southern portion of the region and another to the north. An additional 36-inch line could be built along the eastern edge of Fulton County to connect the two lines and build redundancy in case either line needs to be shut down.

Mr. Kidston said above-ground storage would be built along the eastern border of the lines to supply each community for one day in case of an emergency. A treatment plant would also be constructed, although groundwater requires minimal treatment.

The Williams County Alliance has started a petition that states:

The water of the Michindoh Aquifer is a precious resource that is essential for life. Water resources should not be privatized. Existing law needs to be changed to ensure that aquifers like the Michindoh remain sustainable sources of water for future generations.

Many of the people directly affected by Kidston’s commercial water operations are up in arms, demanding that local, county and state government put a stop to Kidston’s profiteering off of the Michindoh Aquifer — a finite resource. Kidston would have locals believe the Aquifer is a limitless resource that can easily handle pumping millions more gallons a day. The City of Bryan uses one million gallons of water a day. If Maumee, Sylvania, Perrysburg, Whitehouse, and other local communities start using Aquifer water, we are talking about millions of gallons of increased daily draw-down. Based on current rain and recharge levels, the Aquifer will, if Kidston gets his way, draw down faster than it can be replenished. And once this happens, communities such as Ney could face dry wells. And what happens then? Will Kidston be required to turn the tap off that supplies water to larger local communities? Of course not. Ney will just have to figure out how to best provide water for its insignificant, non-consequential 356 residents. This very scenario has played out countless times across the United States in recent years as commercial entities draw down water tables and cause dry or under-performing wells. Even worse, numerous ground drinking water supplies have been compromised by pollution and farm runoff. 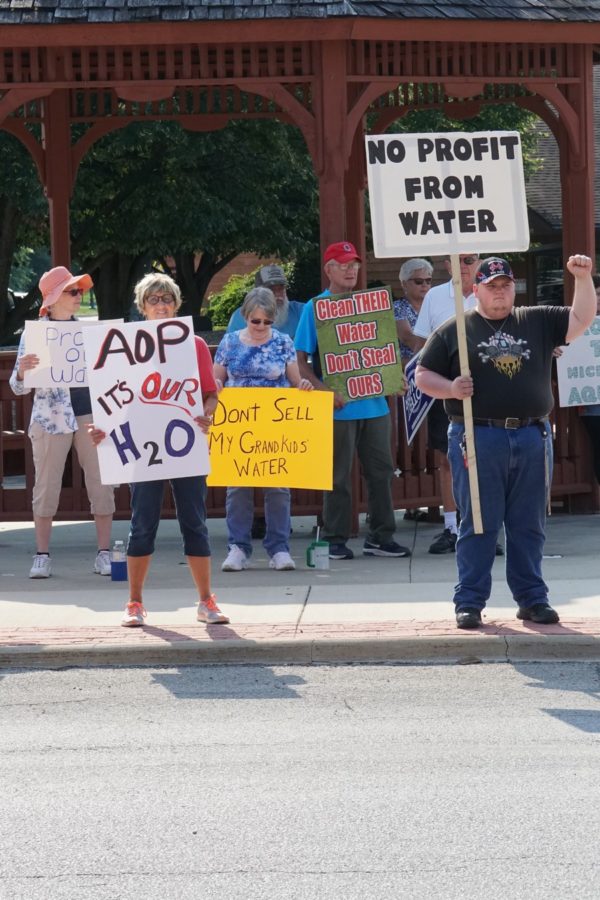 It is up to local, county, and state government officials to use their collective power to put an end to Ed Kidston’s money-making scheme to deplete the Michindoh Aquifer. Local leaders might argue that it is not against the law for Kidston to tap the Aquifer and sell its water to communities outside of the Michindoh watershed. However, just because someone CAN do something, doesn’t mean he should. This issue is clearly one of doing what is best for the people who rely on the Aquifer for drinking water.

Once Kidston starts pumping water to the highest bidder, there is no turning back. Not only will thirsty local communities be drawing millions of gallons of water a day out the Michindoh Aquifer, so will local manufacturing concerns and large-scale farming operations. The answer is to kill Kidston’s plan before it can gain traction. Local protests and anti-Kidston signs are important, but these alone will not stop Ed Kidston from continuing with his plan. Why? Because it is all about money. It’s always about money. If Kidston was concerned with doing what’s best for Northwest Ohio, Southern Michigan, and Eastern Indiana he would, without delay, cancel his plan to drill a test well. Unfortunately, every gallon pumped out the ground and sent eastward means more money for Artesian of Pioneer and its owner Ed Kidston. 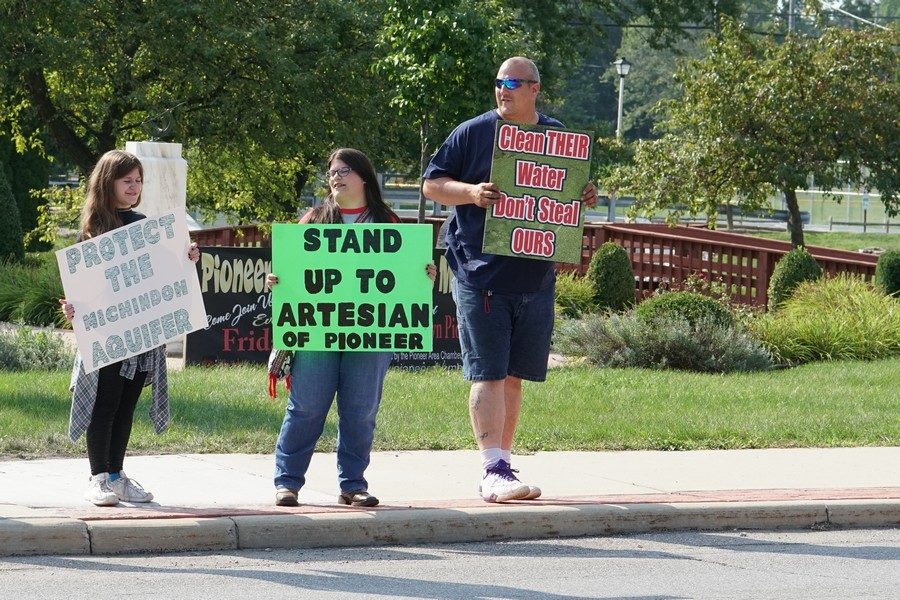 Save Our Water: Protect the Michindoh Aquifer Facebook Page