There’s Power in the Name of Jesus 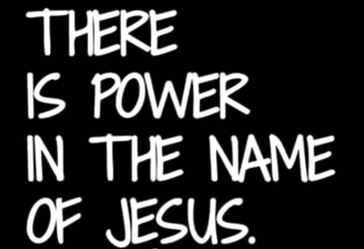 There is power in the name of Jesus. Or so Evangelicals believe, anyway. I have spoken the name of Jesus tens of thousands of times, both as a Christian and an atheist, yet I have found Jesus’ name to be impotent and powerless. As a Christian, I ended every prayer with in Jesus’ name, amen. I invoked the name of Jesus countless times in my sermons, in my writing, and in my day-to-day conversations. Yet, despite my devotion to Christian faith and practice, I found Jesus’ name to be every bit as powerless as the names Tom, Dick, and Harry. As an atheist, I have written and spoken the name of Jesus thousands of times, often in blasphemous ways. Yet, the name of Jesus remains powerless. Surely, my irreverence and blasphemy are an affront to Jesus, yet he does nothing. Wouldn’t it be a great way to make a point to other blasphemers if Jesus struck dead the infamous Evangelical-preacher-turned-atheist Bruce Gerencser? Well you just wait, Bruce, your payday is coming, Evangelicals say. In an hour that you think not, Jesus — the giver and taker of life — is going to call your number and cast you into the Lake of Fire. Then you will know the power that is in the name of Jesus.

What Evangelicals fail to see is that the real power is not found in Jesus’ name, but in the myths that are built around his name — starting with the myths found in the New Testament, right down to the fanciful stories of today, told by preachers Sunday after Sunday. All the promises and all the judgments Christians hang their hats on come into play after death. Evangelicals can call fire and brimstone down upon my head, but when it doesn’t happen the retort is, just you wait. There is coming a day when you will stand before the judgment bar of God and then you will prostrate yourself before Jesus in fear. For believers, everything is offloaded to eternity. That’s where the action is; that’s where Jesus will reveal himself; that’s where God will pay off all the betting slips. Of course, believing such things requires faith. Evangelicals revel in the midst of their faith: Jesus saves, Jesus delivers, Jesus heals, Jesus, Jesus, Jesus. The mere mention of his name in the alternate universe called Christianity works wonders to behold. But in the here and now, the powerful Jesus is no different from Elmer Gantry. You see, reason, skepticism, and intellectual inquiry demand evidence for the claim that there is “power in the name of Jesus.” And until such evidence is provided, I shall not believe. Jesus — the one Evangelicals say is a divine flesh-and blood miracle worker — has had ample opportunity to draw me unto himself, yet my ears do not hear and my eyes do not see what Christians say is true. Instead, I see and hear centuries of myths that have turned a dead Jewish apocalyptic preacher into a hybrid God-man who one day will return to earth on a white horse and judge the living and the dead, casting into a lake that burns with fire and brimstone all those who refused to believe the myths.

Certainly, myths play a role in the ebb and flow of human life. I don’t discount for a moment the fact that countless people find hope, purpose, and meaning in Christianity; and for these people the name of Jesus carries great power, much like the deities of other religions. If Jesus is what you need to get you through the night and into the morning light, then by all means speak his name. But don’t expect unbelievers to buy into the notion that there is power in the name of Jesus. Just saying something doesn’t make it so, and just because Evangelicals say that Jesus is this or that doesn’t mean what they say is true. Purportedly, Jesus exited stage right two thousand years ago and he has not been seen or heard from since. Christians believe that he miraculously ascended into Heaven, and will someday split the eastern sky as he returns to earth. Someday, always someday. Never today, never tomorrow, never a year from now, but someday — or so Christians say. Unbelievers are expected to bow in fealty to the Lord of Lords and King of Kings — the man, the myth, the legend, Jesus Christ — even though no one has seen him, heard him speak, or received an email from him in more than twenty centuries. Instead of clinging to the “official” story —where are Mulder and Scully when you need them? — perhaps Evangelicals need to admit that it is unlikely what they believe is true; that there’s no real power in the name of Jesus.