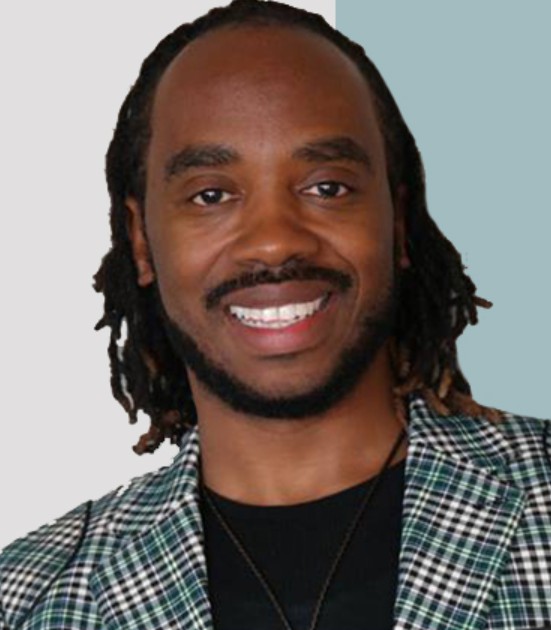 Victor Couzens, pastor of Inspirational Bible Church – City of Destiny in Forest Park, Ohio (near Cincinnati), finds himself facing allegations that he had affairs with several (Christian) women.

Bishop Paul S. Morton, founding presiding bishop of The Full Gospel Baptist Church Fellowship International which encompasses some 5,000 churches and 1 million members — Couzens sat on the board of  FGBCFI — released the following statement: 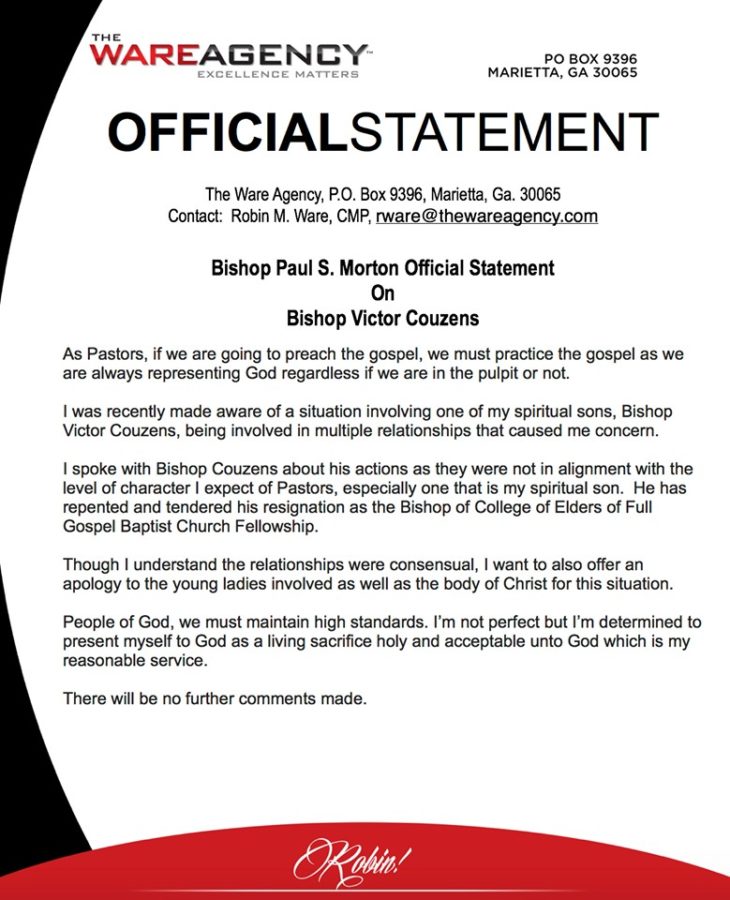 Five years ago, Morton, himself, was outed over having a “secret” daughter. Here’s his “confession”:

As is common these days, Morton blamed “Satan” for being outed.

The site accused the 62-year-old preacher of having a 39-year-old daughter name Ane’tra Hawkins that he “did not claim” for more of her life. He is also being accused of denying his daughters existence years ago in fear of jeopardizing his plan to become a pastor.

Now Bishop Morton is speaking out to Jawn Murray’s AlwaysAList.com to defend himself.

“While in my early 20’s, prior to pastoring and being married, I did have a very short-lived relationship with a Ms. Elaine Hawkins. A few months after the relationship, she informed me she was expecting a child,” Bishop Morton recalled.

The daughter she was expecting is now 39-year-old Ane’tra, who he provided financial support for. His family, including his three children and wife Dr. Debra B. Morton who is also a pastor, were aware of his other child all along.

“I wish I could tell you that I did right all my life, but I can’t. I have made some major mistakes and this is one of them,” Bishop Morton said about having unwed sex as a young preacher.

Ane’tra supplied the documents to ObnoxiousTV which shows that when she turned 15, her mother asked for financial support. Bishop Morton had the courts institute a legal agreement to determine the financial commitment that he would be required to make until she turned 18.

It wasn’t until Ane’tra was 18 that the preacher decided to ask for a DNA test after, “additional financial requests were made and threats of public exposure.” Ane’tra’s mother denied the request and as a result, Bishop Morton decided that “all contact and financial support” would end.

Ane’tra is now married with three children of her own so the reasons for her coming forward now are unclear. Bishop Morton’s reps think that the move is financially motivated.

“That was one major mistake that I made that I did correct. But people don’t mention the correction,” said Bishop Morton, before emphasizing: “People like mess!”

Bishop Morton believes that this entire ordeal was done to attack his integrity and credibility.

“I know what the devil is trying to do, he wants to take my influence,” he explained. “I know that I have been living a Godly life for God.”

Back to Couzens, father of six,  and his affairs. According to the Christian Post, one of Couzens’ lovers, Andrea Garrison, thought the good pastor was in a monogamous relationship with her and wanted her to move in with him:

Morton’s apology came after Andrea Garrison, a 29-year-old New York City model who said she had a long-term sexual relationship with Couzens and planned to move in with him as recently as last month, publicly demanded that Couzens apologize to her for allegedly getting engaged to another woman and lying about the nature of their affair.

“I felt stupid, I felt used, I’m hurt, [he] publicly humiliated me, tried to lie on me, tried to tell people I got no receipts. I got more receipts than you could ever imagine,” Garrison explained in an interview with Larry Reid Live on Wednesday where she presented photos of them together as recently as this summer.

“Church checks, [evidence] from other women coming at me with receipts. It’s a lie. It’s not cool,” she insisted of the evidence she has to back up her story.

Garrison stood by her story in an interview with The Christian Post on Monday morning and shared explicit evidence of the relationship she had with Couzens.

She said she was intimate with Couzens as recently as three weeks ago and was led to believe that she and the megachurch preacher began a steady relationship in April after enjoying an on-and-off sexual relationship since 2011.

She was devastated to learn recently, however, that her relationship with the pastor was not exclusive.

Couzens’ bio on his ministry website describes him this way:

He has been the recipient of the Ohio Humanitarian Award by the former Governor George Voinovich, a member of the Governor’s Task Force on welfare reform, and a community liaison concerning non- violence.  Bishop Couzens has also served as a member of the Northern Kentucky University African American Advisory Board, Springfield Township Strategic Planning Committee, National Heritage Advisory Board, been featured guest on B.E.T and a host and co-host on The Word Network.

“Bishop of the Year” is the award his Cincinnati faith colleagues have bestowed upon him.

Bishop Couzens ecclesiastical affiliations include: Full Gospel Baptist Church Fellowship International, and E.M.A.C (Elijah’s Mantle Apostolic Covering). He previously served as the third vice president of the National Baptist Convention USA, Inc. – Young Pastors and Ministers Division.  He attended the historic American Baptist College in Nashville, TN and received his Bachelor of Science in Biblical Studies degree with a concentration in Leadership and Ministry from the Cincinnati Christian University. Bishop Couzens holds a Masters of Art Degree in ministry from the Indiana Wesleyan University and a DMin from United Theological Seminary.  During his DMin studies he held the distinction of being the first seminary student to lecture at United Theological Seminary in recent history.

Dr. Couzens is the Senior Pastor of the Inspirational Baptist Church located in Cincinnati, OH since July 2000.  In May of 2002 he led Inspirational in a $1.3 million dollar building project and relocation.  The church has experienced explosive growth under Dr. Couzens anointed preaching and teaching. The church has grown from a 300 active membership to more than 5000 in the last ten years.  Bishop Couzens has introduced Inspirational Baptist Church to the Purpose Driven Church Model, expanded the ministries administrative support staff, introduced and implemented more than 45 new ministries.  Dr. Couzens is leading the church to be a community focused church through our “Make A Difference” efforts which continue to result in hundreds of families being fed, hundreds of families receiving gasoline, and hundreds of families receiving rent and mortgage assistance.  Inspirational Baptist Church is recognized as one of the fastest growing churches in the tri-state. The ministry of the church has been viewed weekly by thousands on local network television and by millions on the Word Network and the Impact Channel.  Dr. Couzens continues to reach the masses through innovation and relevance.

The phenomenal growth of the ministry prompted Dr. Couzens to heed to the unction of the Holy Spirit and seek out additional space for the ministry to grow and expand.  In August 2007 Inspirational Baptist Church purchased a 14-acre water park in Forest Park, OH formally known as Surf Cincinnati.  On Easter Sunday, April 12, 2009 the church moved into their 12 Million dollar new multi phase facility which includes a 1600 seat worship center, youth ministry facility with a gymnasium, skating rink, volleyball capabilities, a children’s ministry facility, a sports-plex, miniature golf course, race car track, cafe, production studio and daycare. The building is affectionately known as “The City of Destiny”.

Dr. Couzens has been featured in newspapers, magazines and several other publications including Who’s Who in Black Cincinnati. This national publication highlights African American professionals who are considered exceptional. Dr. Couzens spiritually covers over 200 churches in South Africa, Kenya, and the Philippines ordaining 300+ Bishops, Pastors, and Elders.

I wonder if they will add, “and he likes to have sex with hot models” to his bio?

Based on everything I have read, the sex between Couzens and these women was consensual. The only person who might be offended is God, and he evidently didn’t say anything.  As of the writing of this post, Couzens is still the pastor of Inspirational Bible Church. Should he be fired or resign, one thing is for certain, as sure as the sun rises in the morning, after a short period of repentance, reflection, and scheming, Couzens will rise again and reenter the ministry. There will always be a church somewhere who will give a “fallen” preacher a second, third, or fourth chance.