Is Rachel Evans in Hell? Pulpit & Pen and The Transformed Wife Say YES! 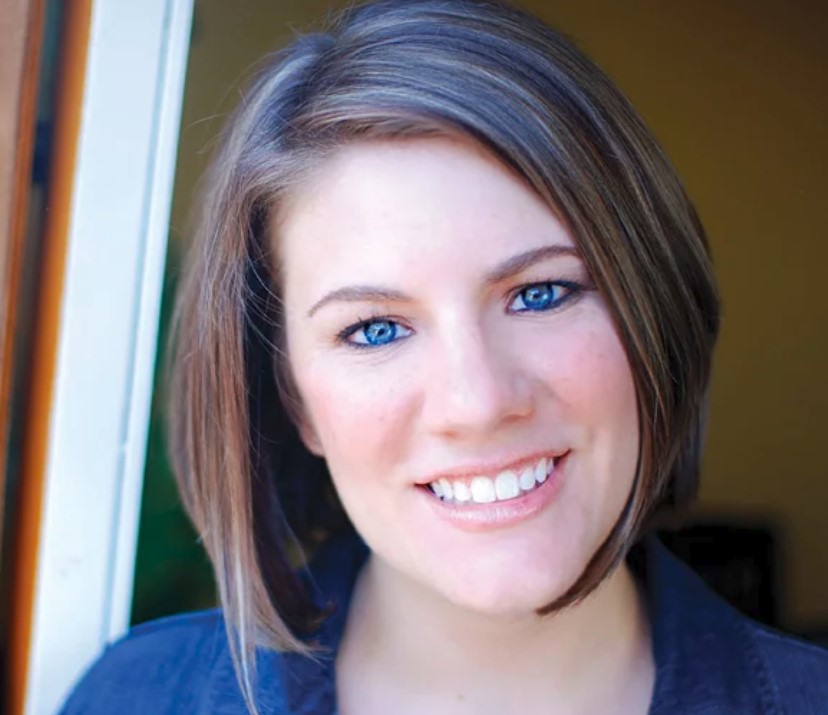 Rachel Held Evans, a popular progressive Christian writer and speaker, died Saturday morning (May 4) at age 37 after a brief illness.

Evans had been in a medically induced coma for several weeks and never returned to an alert state.

Writer and collaborator Sarah Bessey tweeted that Evans was surrounded by close friends and family at the end, and the Rev. Nadia Bolz-Weber shared that friends were at Evans’ bedside Friday night, offering “our touch and tears and song. I anointed her with oil.”

Her husband, Dan Evans, informed followers and supporters of his wife’s death on her website.

“This entire experience is surreal. I keep hoping it’s a nightmare from which I’ll awake. I feel like I’m telling someone else’s story,” he wrote in an update on Evans’ blog.

“I cannot express how much the support means to me and our kids. To everyone who has prayed, called, texted, driven, flown, given of themselves physically and financially to help ease this burden: Thank you. We are privileged. Rachel’s presence in this world was a gift to us all and her work will long survive her.”

On April 14, Evans, who was particularly gifted at using social media to connect with her readers, tweeted that she had been admitted to the hospital with a “flu + UTI combo and a severe allergic reaction” to antibiotics, asking for prayer and — with the characteristic humor she often used to defuse difficult conversations — lamenting she would miss “Game of Thrones.”

Later, in an update on her website, Dan Evans said that she began having “unexpected symptoms” while receiving treatment for an infection and that doctors found her brain was experiencing constant seizures. Doctors had placed her in a medically induced coma while working to determine the cause and treatment, he said.

Evans is best known for her popular blog and best-selling books, including New York Times best-seller “A Year of Biblical Womanhood,” ”Searching for Sunday” and, most recently, “Inspired.” She also served on President Obama’s Advisory Council on Faith-based and Neighborhood Partnerships.

In her books and blog posts, she wrote openly about her faith journey, which led her from Bryan College — a conservative evangelical school known for promoting belief in a literal, six-day creation — to the mainline Episcopal Church. Along the way, she chronicled her faith, doubt, honest questions and evolving beliefs with a sense of humor.

That didn’t come without controversy, including pushback from more conservative Christians over “A Year of Biblical Womanhood,” which celebrated an egalitarian view of women’s roles in both marriage and the church.

But in her writing she rarely lapsed into us-versus-them arguments, instead presenting a vision of the church as a place with room for everyone.

“And there’s always room for more.”

Evans, a one-time Evangelical, was loved and hated by Evangelicals. Several self-righteous Christians took took to their blogs and social media to let it be known that Evans is now in Hell.

First up, are the miscreants at Pulpit & Pen. Greg Smith writes:

Rachel Held Evans was on the wrong side of every controversial issue and point of doctrine plaguing the western church today. With full knowledge she loudly and publicly chronicled her departure from anything that could be considered the historical Christian faith. No need to establish and or document that here and now. It is beyond dispute for anyone with a modicum of commitment to the biblical gospel.

In that light, how do we respond when a person like this passes into eternity, by all biblically reasonable accounts, apart from the saving blood and knowledge of the true and holy only begotten Son of the living God?

We should certainly not shrink from the realities that such a situation confronts us with. Only God Himself can pass final judgement on a human soul, however He has given us His word whereby we are to declare His revealed mind on all things, including the standards by which yes, we ARE to judge the state of others when it is this clear according to the evidence their life has shown us.

If we do not warn that the denial of the saving truth as it in Christ Jesus IS eternal death, then we are presuming ourselves to be wiser and holier than God who commands exactly that. The blood of those who hear us would then be on our hands as the Lord proclaimed through the prophet Ezekiel.

With that in mind, we also should never rejoice or sneer at the loss of another, no matter who or what they are. To do so is to demonstrate a profound lack of the knowledge of our own sin and the grace and power of God, the Father, Son and Holy Spirit required to save us from it.

It is in the spirit of both of these biblical principles that Pulpit and Pen expresses it’s [sic] sorrow and regret at the passing of Rachel Held Evans. Both for the loss of her soul and for the unbiblical and further soul damning treatment that her already tragic death will inevitably give occasion to

Jordan Hall, pastor of Fellowship Baptist Church in Sidney, Montana and a writer for Pulpit & Pen, stated he believed Jesus would have likely said the same thing as his Bible buddy Smith:

As in her life, Rachel Held Evans was surrounded by heretics and applauded by apostates at her death. She was ‘anointed’ with oil in the hours before her passing by the self-professed “profane bulldyke” and mannish, self-graffitied, vulgar blasphemer, Nadia Bolz-Weber, who better personifies the Grim Reaper than perhaps anyone in a clerical collar. It’s hard to believe that anyone ushered into the world to come by Bolz-Weber would be ushered into the right world.

Perhaps her own tweet conveys this point the best [Evans’ tweet about God not being a dude.]

Evans knows that God is male now. She also knows so much more. The God she expected to see is not the God she now knows.

Evans, who has used her life’s energy to attack the authority and inerrancy of the Scripture, Biblical gender roles and sexual ethics, and commit all kinds of ontological heresies against God, has been eulogized as though a saint after her death by many who criticized her as an enemy of Biblical Christianity during her lifetime.

For many, theological debate is Kabuki theater, where each side has a role to play and even the audience has a part to act out. There are protagonists and antagonists who spar on stage, but go out afterward to celebrate their dramatic endeavors and the show they’ve put on for the masses. This is all basically a more sophisticated version of the showmanship of professional wrestling.

However, some of us religious types view apostasy as a serious matter. Furthermore, some of us think hell is real. Likewise, we think people actually go there. And, we believe that we know what it takes to avoid that place. Ergo, we take theology, you know…seriously and stuff.

Next up is up Lori Alexander and her cadre of followers at The Transformed Wife. My friend, Suzanne Titkemeyer, posted several Facebook screenshots of comments by Alexander and Co: 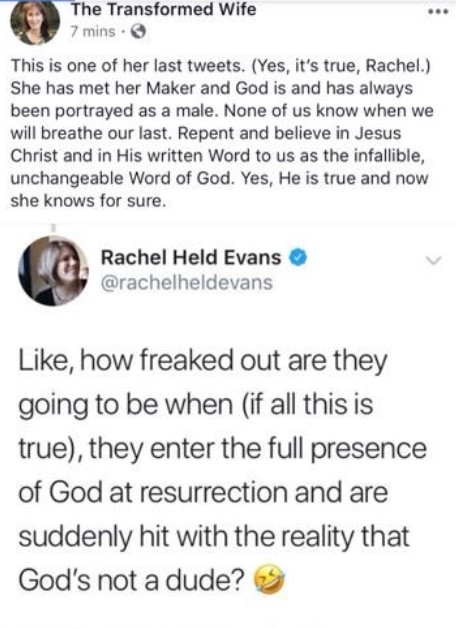 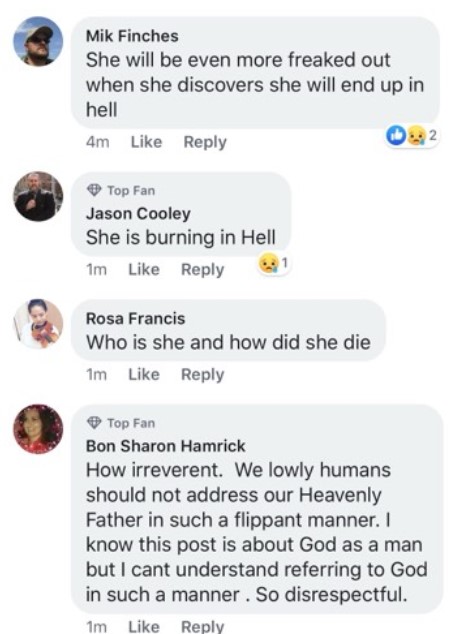 Many people were outraged by Alexander’s words and demanded she take down her post. She replied: 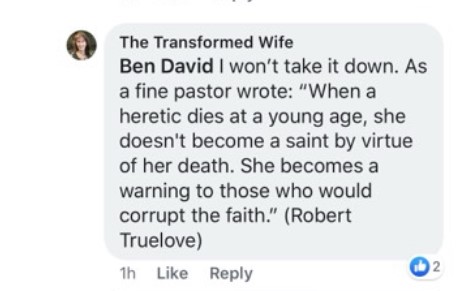 And finally, here’s what Emily Thomes, a former homosexual-turned-Evangelical, had to say: 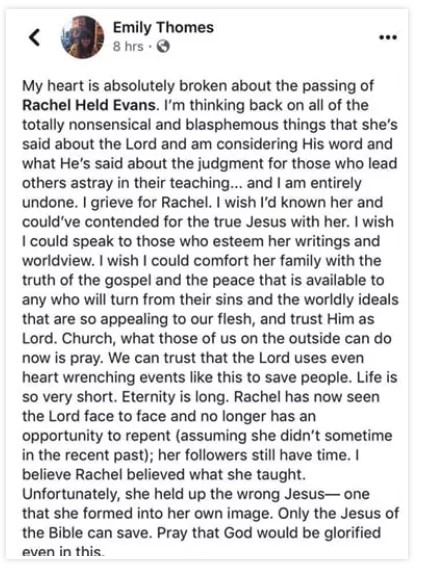 Hateful words from Greg Smith, Jordan Hall, Emily Thomes, and Lori Alexander. However, readers need to understand that their linguistic bile reflects a viewpoint held by millions of American Evangelicals. Evans was viewed by many Evangelicals as a heretic. They despised the larger-than-life presence Evans had among Evangelicals. Her untimely death is viewed by them as God settling the score with one of America’s beloved heretics. That Lutheran pastor  Nadia Bolz-Weber was by Evans’ bedside when she died only confirms their belief that God rained judgment down upon her head. Bolz-Weber’s theology and sexual ethic has been a frequent target of Evangelical writers. That Weber was with Evans at the time of her death only reinforces for them how far she had fallen from grace.

There was a time in my life when I would have agreed with Greg Smith, Jordan Hall, and Lori Alexander about Evans’ unexpected death. I would have viewed her demise as God silencing a heretic. I have long “prayed” that I live to be eighty lest my Evangelical critics turn my death into a sure sign that God has judged me and thrown my ass into Hell. The fact that countless former Evangelicals critique Evangelical doctrine and practices with no recrimination by God should be a sign to zealots that God ain’t paying attention.

Personally, I hope Pulpit & Pen,The Transformed Wife and others of their ilk continue to preach their hatred for people such as Rachel Evans. Their words go far beyond their blogs and social media, leading those with doubts about Evangelical Christianity to conclude that they no longer want to be part of a religion that promotes judgmentalism, bigotry, and hate. Keep preaching the word!