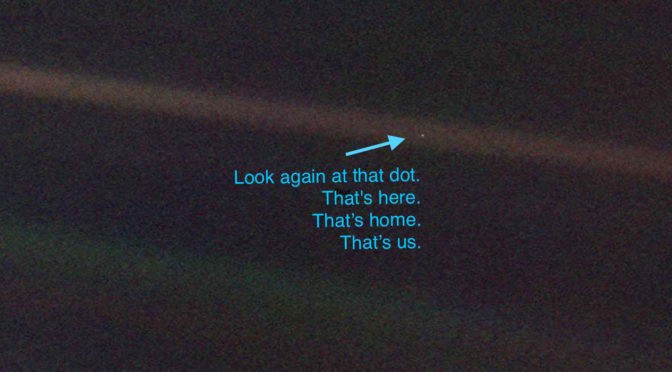 We live on a small, insignificant rock, surrounded by countless galaxies, stars, and planets. We know very little about what lies beyond the Milky Way, and despite our progress, there is still much we don’t know about Earth and its inhabitants. Yes, we humans continue to push into the unknown, but despite our inquisitiveness, we remain insignificant creatures with itty-bitty brains living on what Carl Sagan famously called a “pale blue dot.”

It’s 2019. We supposedly live in the age of science and technological advancement. Yet, the majority of U.S. people believe God created the universe and the Bible is the Word of God. Young earth creationism flourishes and Evangelical Christianity dominates the political scene. How enlightened and advanced are we really if the majority of people worship as if their lives depended on a Jewish man named Jesus who died 2,000 years ago? Ponder for a moment Christian theology; the core beliefs that millions of people believe are true. (Please see The Michael Mock Rule: It Just Doesn’t Make Sense.) Sunday after Sunday, church houses are filled with people singing praises to a dead man; promising to obey the teachings of a Bronze Age religious text. Pray tell, how enlightened are we really?

According to a 2017 Christianity Today story, there are almost 400,000 Christian churches in the United States. Many of these churches are Fundamentalist, falling broadly under the Evangelical tent. (Please see Are Evangelicals Fundamentalists?) The farther to the right you move, the more shrill the Fundamentalists become. One group you will find on the extreme fringes of Evangelicalism is the Independent Fundamentalist Baptist (IFB) church movement. Numbering millions of congregants in thousands of churches, the IFB church movement is fiercely separatist, believing that they preach the One True Faith®, and all other sects are either heretical or heterodox. (Please see What is an IFB Church?)

I grew up in the IFB church movement. I attended an IFB Bible college in the 1970s, pastored several IFB churches, and was deeply invested in IFB doctrine and practice. In 1983, I started an IFB church in the southeast community of Somerset, Ohio. It wasn’t that Somerset needed another church — it didn’t. Somerset had five churches within its village limits, and countless more in surrounding communities. Somerset was, in every way, Christianized, yet Rev. Bruce Gerencser, IFB preacher extraordinaire, believed that Somerset needed one more church — a church that preached the One True Faith®. Ponder, for a moment, the arrogance it took to come to this conclusion. Every time I see a newspaper story about yet another Evangelical church coming to the county I live in, I shake my head and say, “just what we need, another fucking church.” All church planters think “God” is leading them to plant a new church, regardless of how many churches already exist. Church planters convince themselves that they are “special,” and that their church will be different and unique. And as sure as the sun comes up in the morning, over time their churches become just like every other church in town.

Think of the arrogance and lack of awareness required for an IFB preacher — who takes up a square foot or two on this insignificant planet of ours — to think that his church is “right” and all other churches are wrong; to think that his church is a solitary beacon of light in a world he believes is filled with darkness; to think that virtually everyone outside of that particular church has wrong beliefs, worships the wrong God, and is headed for eternal damnation and hell unless they see, know, and embrace the “truth.” Truth being, of course, the God-given beliefs of the One True Faith®.

In the grand scheme of things, we are little more than specks of dirt on a pale blue dot. We live and die, and before long are forgotten, a footnote in the history of humankind. What better way to drive away insignificance than to convince yourself that you are special; that God speaks to you and has a divine plan for your life. I planted five churches during my time as an Evangelical pastor. There’s nothing more thrilling than starting a new church. Every Sunday is filled with excitement and anticipation. Over time, you attract people who like you as a person or are drawn to your preaching or personality. As the church grows, you begin to think, “I’m special. God is really using me!”  In 1986, the IFB church I was pastoring at the time became the largest non-Catholic church in the county. I proudly advertised, “Perry County’s Fastest Growing Church.” I just knew that I was right and every other church/pastor was wrong. My church was growing, and other nearby IFB churches were not, so I began to think that there was something wrong with them; that maybe there was some sort of defect in their beliefs and practices; that maybe they didn’t work as hard as I did. Isn’t that the American dream? Work hard, and good things will happen. Yet, when I resigned from Somerset Baptist Church in the spring of 1993, the glory days were long over. I had moved on from the IFB church movement, embracing Calvinism and starting a private Christian school. My credo was quality over quantity. Did leaving the IFB church movement make me more ecumenical? Not at first. You see, Calvinism is its own special club. Ironically, most of the Calvinistic Baptist — Reformed Baptist, Sovereign Grace Baptist — preachers I knew were former IFB pastors. Much as I did, these preachers had a Paul-like Damascus Road experience and converted to the One True Faith® — Evangelical Calvinism. What this merry band of predestinarians did was just move one more step to the right. Certain that they finally had found THE “truth,” these preachers of John Calvin’s gospel derided their previous beliefs, doubting that those still in IFB churches were really Christians.

The next time you drive by an IFB church or a Sovereign Grace/Reformed Baptist church, just remember that the pastor of the church and his congregation believe that their church is right and every other church is wrong. And remember most of all the insignificant part they play on planet earth. Oh, they believe otherwise, that God is doing a mighty work in and through them, but the fact remains that they are just another speck of dust on a pale blue dot.