Quote of the Day: Flat-Earth Conspiracy Continues to Spread 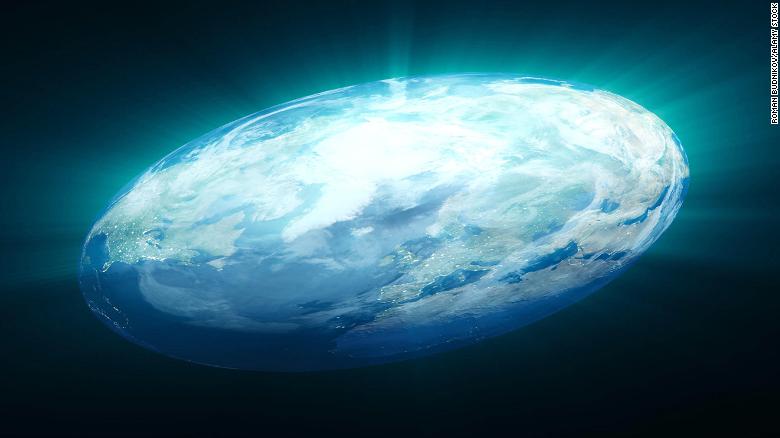 This week, the businessman attended the third annual Flat Earth International Conference, held at an Embassy Suites hotel in suburban Dallas, Texas. Organizers told CNN that about 600 others went too.
….
The event’s schedule resembled any corporate conference, with some fairly noticeable twists. Speakers gave presentations including “Space is Fake” and “Testing The Moon: A Globe Lie Perspective.” Awards for the year’s best flat Earth-related videos were handed out. And believers reveled in an opportunity to meet several of the movement’s most influential minds.

People in every pocket of this spherical planet are rejecting science and spreading the word that the Earth is flat.

There’s no clear study indicating how many people have been convinced — and flat Earthers like [David] Weiss will tell you without evidence there are millions more in the closet anyway, including Hollywood A-listers and commercial airline pilots — but online communities have hundreds of thousands of followers and YouTube is inundated with flat-Earth content creators, whose productions reach millions.

A YouGov survey of more than 8,000 American adults suggested last year that as many as one in six Americans are not entirely certain the world is round, while a 2019 Datafolha Institute survey of more than 2,000 Brazilian adults indicated that 7% of people in that country reject that concept, according to local media.

When [Robbie] Davidson first heard that people really do believe in a flat Earth, “I just laughed and said, ‘they’ve got to be the stupidest people ever.’ Who in their right mind could believe something so dumb?”

A couple of years later, Davidson was setting up the first international flat Earth conference. Like most of the speakers at the event CNN spoke to, he was convinced after he decided he couldn’t prove the Earth’s roundness.

For Davidson, a born-again Christian [a common trait among flat-eathers], the most logical explanation for the conspiracy of the millennium goes like this: “Let’s just say there is an adversary, there is a devil, there is a Satan. His whole job would be to try to convince the world that God doesn’t exist. He’s done an incredible job convincing people with the idea that we’re just on a random speck in an infinite universe.”

The reality, says Davidson, is that the flat Earth, sun, moon and stars are contained in a “Truman Show”-like dome. From there, pitfalls can be easily dismissed — like photos of the Earth from space, which flat Earthers believe are photoshopped. “This all goes away if they put a 24/7 camera feed on the moon,” he adds.

And Davidson quickly found a large online community believing the same thing. “I thought doing a conference would just take it to the next stage where the media and the world will look at it and say, ‘wait a minute — something must be going on. This is not just some internet fad, or a bunch of crazy people online. They’re now meeting in buildings.'”

He has a few things he wants to make clear to a flat-Earth novice.

Firstly, and most importantly — “none of us believe that we’re a flying pancake in space.” The community merely believes that space does not exist, the world sits still and the moon landing was faked. The jury is out on gravity — but as Davidson notes, no one has ever seen it.

Secondly — no, you won’t fall off the edge. While flat Earthers’ views of the world vary, most believe the planet is a circular disk with Antarctica acting as an ice wall barrier around the edge.

And thirdly, modern flat Earthers have little in common with the Flat Earth Society, a group that has existed for decades and has more than 200,000 followers on Facebook.

That organization, some speakers told CNN, is a government-controlled body designed to pump out misinformation and make the flat-Earth cause sound far-fetched to curious minds. Davidson calls their theories “completely ridiculous.”

Most [flat-earth] adherents say they’re just curious, as all good scientific minds should be. “We love science,” Davidson insists.

Still, most adherents demonstrate plenty of anti-scientific tendencies. It’s hard to find a flat Earther who doesn’t believe most other conspiracies under the sun; a flat-Earth conference is invariably also a gathering of anti-vaxxers, 9/11 truthers and Illuminati subscribers, to name a few.

It’s that hyper-skeptical mindset that helps flat earthers answer the big questions — like who’s hiding the true shape of the planet from us?

“The ruling elite, from the royal family to the Rockefellers, the Rothschilds … all of those groups that run the world, they’re in on it,” says Weiss.

Scientists have also noted that a social motive draws people to conspiracy theories — the desire to “maintain a positive view of the self and the groups we belong to,” as social psychologist Karen Douglas of the University of Kent says.

And few groups have as strong a community as flat Earthers.

“This (conference) is an outlet for a lot of people that might otherwise get ostracized by friends and family and co-workers. When they come here, they know it’s absolutely a safe space,” [Mark] Sargent says of this week’s event.

But perhaps the most important driver is an underlying need for power and control. “People want to feel safe and secure in the world,” Douglas says. And power comes from knowledge — no matter how questionable it may be.

“It seems that increasingly, people don’t trust scientists and experts, or their motives,” Douglas says. “More research needs to be done in this area, and I’m sure there are some positive consequences to believing in conspiracy theories, but early indications suggests that they are more harm than help.”

— Rob Picheta, CNN, The flat-Earth conspiracy is spreading around the globe. Does it hide a darker core?, November 18, 2019